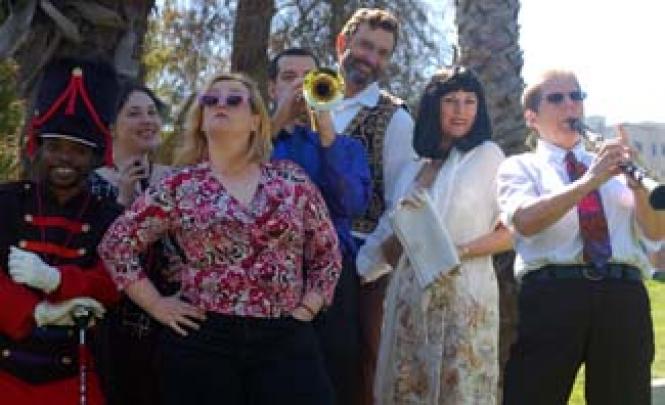 Choristers and musicians appearing in the 32nd annual
Pride Concert, The Sound of Fabulous.

One of the most eagerly awaited Pride month events, the 32nd annual Pride Concert, is scheduled to kick off Pride Weekend on June 24 & 25 at 8 p.m. in Mission High School. Titled The Sound of Fabulous, the evenings are co-presented by two of the many organizations founded by the late Jon Sims, the Lesbian/Gay Chorus of San Francisco [LGCSF] and the San Francisco Lesbian/Gay Freedom Band [SFLGFB].

The concerts will not only celebrate the 30th anniversary of the LGCSF, but also showcase the SFLGFB, San Francisco Gay Men's Chorus [SFGMC], Golden Gate Men's Chorus [GGMC], Voices Lesbian Choral Ensemble [VLCE], Cheer SF, and select members of the Bay Area Rainbow Symphony [BARS]. The nights will also serve as a farewell to Stephanie Smith, who is departing as Director of the LGCSF after eight years of service to resume her career as a pianist; and a welcome for Joe Piazza, who took over directorship of the GGMC on May 9.

"First and foremost, it's a family-friendly event," Smith explained in an extremely energized phone chat. "The Band will play selections from Wicked, the GGMC will of course blow us away with their musicianship, and the Gay Men's Chorus will do some of the selections they performed amidst death threats as they toured Redding, Fresno, and other more redneck areas of California this past year."

Smith stressed the equal importance of the presence of a lesbian-identified chorus, the VLCE, which didn't perform for a year while they searched for their new Artistic Director, Jessica Bejarno.

Smith enthused that Cheer SF will perform in the Pride concert for the "first time ever. I'm so excited I can hardly stand it. It really makes me happy that they'll perform in my final concert, because I've had this vision for years that the Pride Concert should be more than just a musical event. I've always wanted it to be a spectacle, with cheerleaders, cloggers, and the like."

The LGCSF will perform a mishmash of favorites that Smith has conducted during her tenure. They'll also reach farther back, to the costumed and choreographed version of Carmen Miranda's unforgettable "The Lady with the Tutti-Frutti Hat," which they performed at a GALA lesbian and gay chorus convention in Denver 15 years ago.

"The lesbians in Denver were so angry that we performed with phallic bananas," Smith chuckled. "So revisiting it is literally my pleasure. People loved the bananas in San Francisco, but they freaked in Denver. Our chorus has always just sort of done its own thing. We have this interesting mix of women and men, and have always had our own sense of humor."

Nonetheless, Smith is prepared to cover all fronts not pierced by those bananas. "Shenandoah" will honor our American heritage; the Hebrew piece "Eli, Eli" will give a nod to the 22nd Psalm; "Marybeth" from June Bonacich's Group Therapy will cover the couches so many of us have confessed on; and "Stacey's Mom" will prove that we continue to rock on, from cradle to grave. The chorus will also make available a DVD of their performance of Jack Dubowsky's Halloween in the Castro, an original operatic commentary on violence in the Castro.

"This is the one time of year that all the groups that are in the same city and that have the same mission have an opportunity to get together," said Smith. "There is nothing better than having the band accompany you. And I'm a sucker for history. I get the goosebumps every time all these groups that have been around for longer than I've been alive get together."

Piazza, who has served as Interim Director of GGMC since January, promised two classical selections plus a spiritual. He also pledged that GGMC will continue to offer its special blend of music, from Gregorian chant and Renaissance music to contemporary fare.

"My own tilt is toward Scandinavian music, world, and jazz," he declared. "I'm also a big fan of German male choral music."

The evening will include the combined choruses performing a selection from Naked Man, with the BARS wind ensemble joining in, and music by Diana Ross and Cy Coleman.

"This is the chance for all the choruses to come together and make wonderful music," Piazza said. "We have so much to express through our voices."