Lives in the Yiddish Theater, re-enacted 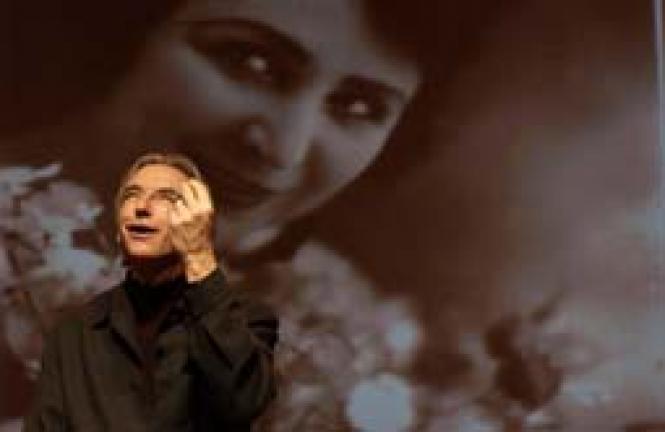 Michael Tilson Thomas in front of a projection of his
grandmother, Bessie Thomashefsky. Photo: Stefan Cohen

Like ritual visits with beloved family elders, Michael Tilson Thomas appears to be establishing a new tradition with friends and fans in Northern California. Every few years, he is dusting off the family album and presenting an evolving tribute to his grandparents, Yiddish-American culture and the immigrant experience of the early 20th century.

It is called The Thomashefskys: Music and Memories of a Life in the Yiddish Theater, and, if the new edition presented last week at Davies Hall was not radically different from the one first seen in 2005, there was enough "entertainment, education and elevation" to justify regular revivals of the show.

MTT has led a charmed life himself. Tremendous career achievements and prestigious posts have marked the road from the San Fernando Valley to the podium of the San Francisco Symphony. He shows no signs of slowing down, but it is endearing to witness his devotion to the past that made him as he assumes the role of historian and musical curator for a previous generation.

Boris and, especially, Bessie Thomashefsky remain the rightful central characters of MTTï¿½s delightful show-and-tell, but a whole faded world receding dangerously close to the edge of memory is brought back to vibrant life with all the glamour, humor and human drama intact.

Of course, the maestro does go on a bit (three hours with intermission), but he is such a charming raconteur, working with such fabulous material, that we endure the redundancies and more modestly amusing anecdotes with patience and affection. He probably felt the same way when grandmother Bessie was recounting her memoirs first-hand.

The stage really ignites with energy and show-biz flair whenever the leader strikes up the band, and MTT got a large, mostly mature and enthusiastic Saturday-night crowd clapping along un-self-consciously right from the very first strains of the overture.

Those wailing Klezmer clarinets, pulsing beat and happy ragtime tunes are the lifeblood of the era and culture that rocketed Bessie and Boris Thomashefsky all the way from obscurity in the Ukraine to the starry skies above old New York.

As the older Boris, Neal Benari exudes the dark charisma his character must have shown the world (and not a few femmes) in his day. He doesnï¿½t get to sing a lot or even talk too much, but Boris was gone before MTT was even born, so the scripted memories are, understandably, spottier and more detached.

Judy Blazer as Bessie is truly another story. She is obviously the main reason for the whole big valentine in the first place, and little bundle-of-energy Blazer made sure our eyes never strayed too far from wherever she was onstage. The sound design of the show by Hal Nishon Soogian was remarkably subtle and well-balanced throughout, but I doubt whether La Blazer really needed the help.

Co-stars Eugene Brancoveanu (young Boris and miscellaneous characters) and Ronit Widmann-Levy (all the other divas of the day) appeared perfectly capable of going without microphones, too.

The placement of the orchestra at the back of the shallow stage probably necessitated amplification. Other theatrical venues could learn from the way it was handled here.

The performances themselves were simply gold, I mean gold, darling â€" without exception. Brancoveanu especially shone in the more serious operetta selections, and he displayed a boyish charm that belied his sturdy build and intense tenor voice.

MTT got a solo turn himself in the literally show-stopping number "Who Do You Suppose Married My Sister? Of Course, It's Thomashefsky!" And the grandson proved he didnï¿½t fall too far from the tree with a very tuneful voice and a credible buck-and-wing.

After this revival, I will stop hoping for a discernible directorial hand to make things tidier and more cohesive. Patricia Birch really just directed traffic and kept the cast from knocking over furniture. Hers was a fairly thankless task. MTT takes sole responsibility for the script, and, as he says of his grandmotherï¿½s endlessly fascinating tales, the story changes a little with every telling.

The Thomashefskys has not changed much, but it still manages to evoke an important time in America, when optimism, chutzpah and the need to share love were enough to sustain a people and a culture. If the show stays a little sloppy, it only reflects the era itself. The Thomashefskys packs enough punch to make another edition worthwhile.

So, nu? See you at Davies in a couple of years?