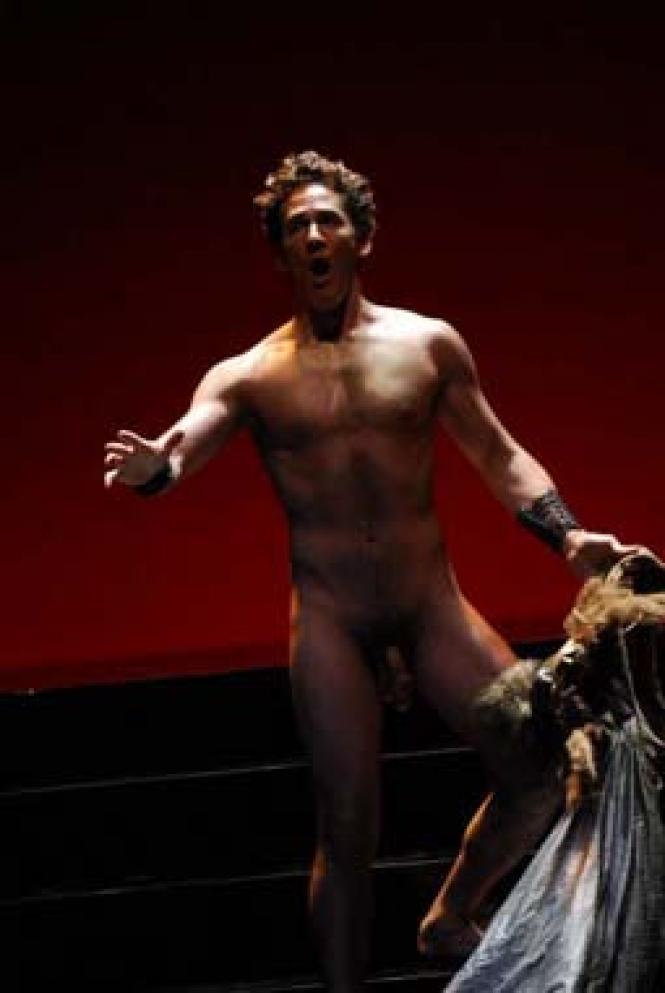 Vivaldi operas are so much in the ascendant these days that Ercole su'l Termodonte, one of the recently reconstructed ones, has already received two new productions in as many years. The second, for Italy's Spoleto Festival last year, just released on DVD (Dynamic), is already generating considerable buzz, but less for the return to the fold of a once-lost Baroque masterpiece (the usual cause celebre in the fiercely competitive early-music world) than because the splendid American tenor who sings the title role of Hercules does so mostly in the buff.

B.A.R. readers will want to know all, and should not be kept waiting. It's not a gimmick or, unless you want it to be, the Falcon Hercules. In one of the soundest moves he makes anywhere in the production, director-designer John Pascoe, taking as his models the iconography of Hercules in Baroque art, dresses him in a fully revealing lion-skin cape, to bring out not only the character's essential virility but also his savagery. (The mythological Hercules killed the lion with his bare hands as, long before, he had his own children.)

Of course, it was possible only with the right singer, and in tenor Zachary Stains (you read that right), Pascoe had his man. Handsome, buff and all together in the altogether, Stains comports himself through the first two acts as if, contrary to evidence, full-frontal nudity were no big deal. You ever quite stop noticing it, but Stains is so easy about the nudity that it feels like astute characterization rather than gratuitous sensationalism.

In a dramatically pivotal moment at the beginning of Act III Ã¢â‚¬â€ which viewers of a certain persuasion may respond to as high tragedy Ã¢â‚¬â€ Hercules doffs even the cape before, fleeting seconds later, being dressed by his soldiers in the same scanty yet concealing black tunic they all wear. Intended to signal his laying down of his barbarous ways to step into a new posture of clemency, compassion and forgiveness, it does so convincingly.

What this inquiring mind wants to know is what Pascoe had in mind midway through the second act, as Teseo (Theseus), a countertenor role sung in this production by the beefy Randall Scotting, implores Ercole to spare Ippolita (Hippolyte) in the Greeks' imminent attack on the Amazons (because Teseo is completely smitten with Ippolita, and she has just saved his life). In his first act as his new and improved self, Hercules promptly agrees Ã¢â‚¬â€ and then kisses Theseus full on the lips. The only onstage kiss in an opera about courtly love as much as about the ninth labor of Hercules, it's attention-grabbing.

Pascoe cooks up a minestrone of design and directorial styles that confounds both eye and sensibility over the long haul. The huge severed-phallus sculptures that adorn the hall of the Amazons look like they were stolen from a Pier Luigi Pizzi production of just about anything, and are at strong aesthetic odds with the real olive trees festooning the garden of the Amazons. The staging of groups, particularly in battle scenes, and the singers' acting overall are the stuff of summer stock.

Vivaldi's rich, unusual score, and its savvy realization by out early-music specialist Alan Curtis and his Il Complesso Barocco, make overlooking any excesses and infelicities of the staging a breeze. The score, reconstructed, completed and in some cases composed by Vivaldi specialist Alessandro Ciccolini, is played in Curtis' edition. The opera preserved on this DVD leaves no doubt why the work cast such a spell on the Roman audiences at its premiere in 1723, before its pieces were scattered to the winds.

Vivaldi, too, indulges a plethora of styles in his remarkable opera, which Curtis describes as almost a comedy, but they're superbly well-integrated into a fast-moving show with enormous variety and vitality. There isn't a slack moment. Curtis' players handle it all with zest and finesse. His cast (except for Stains, not his regulars) acquits itself well overall, if not without some unmistakable vocal accidents along the way.

I remember Curtis once commenting that musicological evidence suggested that Baroque singers were able to do things their counterparts today could only dream of. All the singers in this Ercole are, at some point or other, defeated by the truly fiendish technical demands of the music. What's surprising is not that predictable outcome, but rather the extent to which the high quality of the music and the patent sense of commitment on the part of all the singers allow listeners to excuse the entirely understandable mishaps.

Stains' bold Hercules is well-balanced by Mary-Ellen Nesi's fiery Antiope, Queen of the Amazons. Marina Bartoli's brilliant, classy Ippolita seems almost too good for Scotting's matronly Teseo. A true stage animal and the most secure singer of the lot, Laura Cherici lights up proceedings with her Martesia's every appearance.