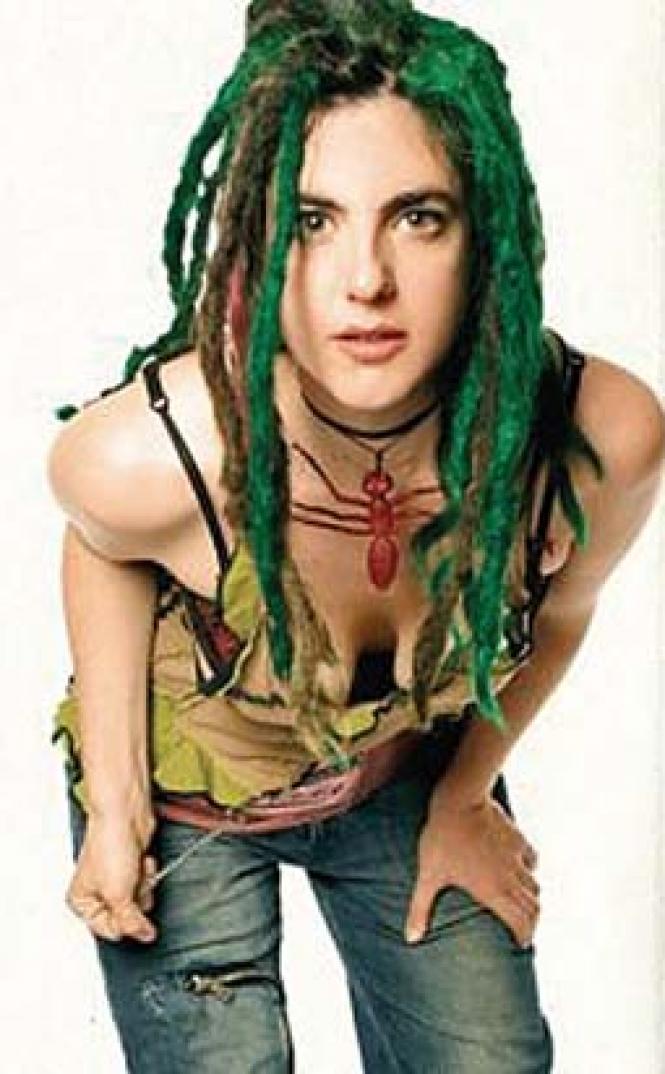 When out performer Bitch sings, "Dare me to rise, and I'll rise," on her first solo album Make This Break This (Kill Rock Stars), you believe that she means business. The song, which delivers a set of blows to the Bush dynasty and the war in Iraq, is the political centerpiece of the powerful set. Bitch, who can add actress to her list of accomplishments with her appearance in the movie Shortbus, took some time to talk about her career.

Gregg Shapiro: People are still talking about the time, a few years ago, when you joined Ferron onstage at the Queer Is Folk festival in Chicago. It was this meeting of two different generations of women's music pioneers, and it felt historic. Did it have special meaning to you?

Bitch: Oh, completely. That was the first time I ever joined her on stage. We have since toured together. I am so inspired by her and her music. I think I finally convinced her to let me produce a record for her.

What was it like being in John Cameron Mitchell's Shortbus?

It was definitely more than just filming something. For a couple of years, we were all getting together and having these kinds of salons. We would play games, or have dinners, so it was a real feeling of community-building. That's something that seems so hard to find in New York. I became part of a new family. It was super-inspiring.

John was really good at figuring out people's strengths. The whole movie was about that, he was working with these actors who he wanted to work with, but didn't necessarily know where it was going.

You also appeared in Mitchell's video for Bright Eyes' "First Day of My Life." Is there any chance he'll be directing a music video for you someday?

Oh God, I hope so! The Associated Press interviewed me about Shortbus, but they wouldn't let me be interviewed if I insisted on being called Bitch. So my friends have been calling me Capital b for a long time. It kind of developed out of necessity. I do like having two different names. Ferron was calling me Capital b on this last tour, which I thought was so cute. Hearing that come out of her voice was so sweet. There are going to be times where you see me appearing as Capital b, but I think my main thing is always going to be Bitch.

Your new disc Make This, Break This was produced June Millington, a legendary figure in the women's music world.

June is so talented. She is very empowered in her opinions, and she was very determined about certain sides of me that she wanted to see come out on this record. When you're making a record, you can get so caught up in the minutiae. At the time, I was in a bit of a change in my life, and it was hard for me to stay focused. My whole thing was like, "I just want to make a record. Let's put this down, let's put that down." We probably put 20 songs down, and we ended up using 13 of them. I feel like I was the wild horse, and she was harnessing it.

I took the risk of doing things that weren't fully crafted yet. I risked recording songs that I've never played live. There is a personal element that comes out, that's a little more raw than what I've done in the past. It's definitely an example of what two Aries can do when they're up all night together! June and I were incredibly focused together, and we could spend long hours in the studio. I think it comes out, there's a fuller sound happening on the record.

The disc was mixed by Roma Baran, known for her work with Laurie Anderson. You play violin, as does Anderson; and the epic closing track "The Most Powerful Thing That Ever Happened In the Entire World" has an Anderson quality to it.

Laurie Anderson was always a huge figure in my life, as far as knowing that she plays violin, that she was "out there" and still having commercial success. She was clearly following a different muse than most people in the musical landscape. In some of our old Bitch and Animal press releases, we said we were "like Laurie Anderson making out with They Might Be Giants." Apparently, she's been lodged in my subconscious!

Bitch will be performing Apr. 15 at 12 Galaxies in SF.

Bitch is back: queer singer-songwriter's new music
Sign up!