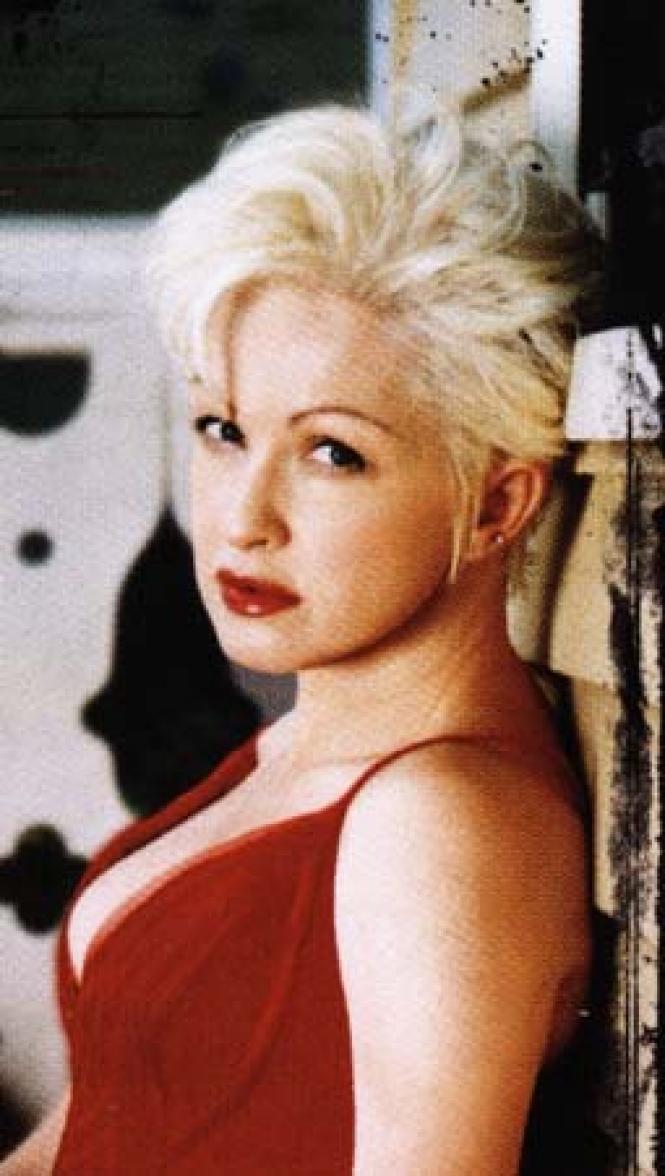 She's still unusual, but that's what has earned Cyndi Lauper a special and enduring place in our hearts. On her new album, the spellbinding The Body Acoustic (Daylight/Epic), Lauper revisits some of the most beloved songs from her career, and reinvents them in fresh, new, acoustic settings. In doing so, she has breathed new life into the songs, revitalizing them. Joined by a stellar array of guest artists including Jeff Beck, Sarah McLachlan, Ani DiFranco, Vivian Green, Adam Lazarra (of emo band Taking Back Sunday), reggae performer Shaggy and the duo known as Puffy Ami Yumi, Lauper shines as her true colors radiate. In a pre-coffee, on-the-way-to-the-airport interview, she talked about the new album.

Gregg Shapiro: Would you say that being on tour and performing the songs from throughout your career had any influence on the songs you chose to revisit for The Body Acoustic?

There was a certain style that you chose to perform the songs on At Last. Did that have any influence on your performance style for the songs on The Body Acoustic?

No, actually, not at all. Because on At Last, I didn't play any instruments; on this, I did. I played dulcimer or guitar and sang, which definitely affects how you sing. Like, "She-Bop" is all live. "True Colors" was live. I guess there were overdubs, but that was all stemming from sitting in a room together and playing live.

Listening to the stripped-down versions of "She-Bop" and "Shine" made me wonder whether these songs were returned to their origins. Since you wrote them, can you tell me if they were created in an acoustic setting, or a synthesizer setting?

"Shine" was basically written on a keyboard. "She-Bop" was written on a keyboard, too. I've been playing it for so long, and it always changes, and that stems out of a live performance thing. I happened to do it at a VH1 concert, and the record company was there, and they loved it. They wanted to make a record of these versions. It was an opportunity for me to play dulcimer. I mean, how many opportunities are you gonna get to do every song with a dulcimer? I guess if they let me play trombone and they said, "Can you do every song playing trombone?" I would give it a shot!

You're such a trouper. That's what we love that about you!

How did you go about selecting your duet partners?

I had a wish list, and a lot of people on my wish list said yes! I thought it was fantastic. Ani DiFranco is a hero of mine, I think she's fantastic. She went out, did her own thing, continues to, and is still a great artist, truly is not compromised. And Shaggy, I think he's fantastic. I met him in Holland, and I had been listening to some of his material before he was recording his album. It was so unexpected to hear the things he was playing me. If you listen to his new album, you'll hear that. Like "Gone with Angels," the one that he wrote for his children. It started to remind me of the guy who fought for the rights for the Jamaican artists, for them to hold onto their copyrights. That's the kind of artist he is. Even with his sense of humor, he's a very heroic type of character.

Sarah McLachlan is fantastic. She sings like an angel. But basically, her work — she just sings beautifully, and how could you not love her voice? I had met her back at a songwriters convention, and I had been thinking about her singing on "Water's Edge" because she always liked that song. It was so much fun to work with her and hear her take on things. And, of course, the two of us are Joni Mitchell freaks.

Then Vivian Green, who came from a completely different background, but has so much heart. I thought having a diverse group of people on the CD was very important. Also, I wanted a very strong female presence because, I'm female.

Then I had the opportunity to work with Jeff Beck, and that was one of those puzzles that came into place that was so beautiful.

The fiddle, the dulcimer and the instrumentation on "Money Changes Everything" and "All Through the Night" give the songs a bluegrass quality.

Ya think? I thought it was kind of early Rolling Stones. Like, "We all need someone we can lean on" from "Let It Bleed." I've always kind of liked their acoustic work. Ya know, just because it's a dulcimer doesn't mean that it can't rock out.

Definitely, it totally rocks. But it also reminded me of the Grand Ol' Opry. Have you ever been invited to play there? Would you want to play there?

I don't know. It's such a strong tradition, and they have their own way. I kind of play dulcimer like a gorilla. So I don't know how that would be embraced. I did want to capture the back-porch feel. It's not necessarily country, but it has a spirit of Americana. That's why I thought it was important to pull people from such diverse backgrounds to embrace what our country is; what it sounds like. This whole hemisphere, the whole new world in the tradition of Dvorak and the New World Symphony. This is the new world, and it's so rich in so many cultures and sounds that you want to pull in all the people that you can. All the things that you love and mix them together, like cooking. Not that I've been cooking much lately, but, when it comes to music I've been doing that.

You're embarking on a tour with Jill Sobule and Sandra Bernhard.

That's going to be a riot. I try so hard to have strong women with me; kind of rockin' chicks, and women who are thinkers. I just think that makes for an interesting tour.