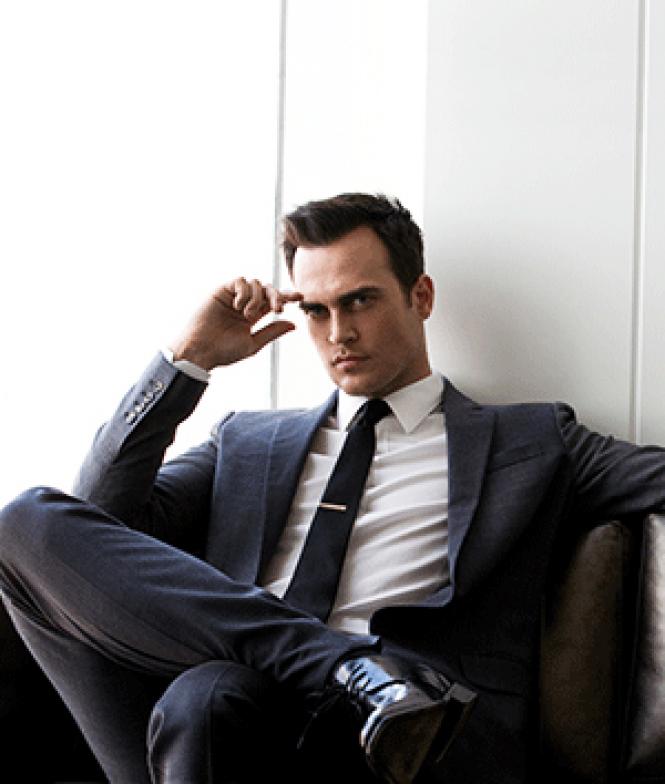 Cheyenne Jackson, who brings his cabaret act to Feinstein's at the Nikko next weekend, has made some rather significant changes in his life since his last performances in San Francisco.

Just a month after his January 2014 engagement at Feinstein's, the veteran of Broadway, "American Horror Story," "Glee," and the San Francisco Symphony production of "West Side Story" announced his engagement to Jason Landau, an actor and entrepreneur, who he praises as "smart, animated, and sharply funny."

Jackson, who met Landau at a 12-step meeting in 2013, says that he had natural trepidation about building a relationship while working recovering from both addiction and the end of his first marriage.

The couple were married in September, 2014 and welcomed daughter Willow and son Ethan this past October.

Jackson explains that he and Landau had their children via surrogacy.

"We used a gestational surrogate and an egg donor and fertilized with his and my sperm. So one of the kids is his biologically, and one is mine.

"I hadn't really seen myself as the dad of twins," admits Jackson. "But you're encouraged at the fertility clinics to put in two embryos to up your chances of one pregnancy taking. You have to really be mentally ready for both to take, though, and for the reality of having two human beings to care for. It's a 20 percent chance or something. And that's what happened.

"We tried just once, with two embryos and were so blessed to have both take. Now I can't imagine anything else. People say to us, 'Oh my god, how do you manage two?' But it's all we know, and honestly, one would seem strange at this point. It's loud in our house, and we love it!"

Jackson says he turned to fellow gay dads in the entertainment business for tips on impending fatherhood.

"I chatted with Ricky Martin when we were in our second trimester," said Jackson. "He had lots of advice on twins, since he has first-hand experience."

Another role model was filmmaker Ira Sachs, who has five-year-old twins with husband Boris Torres. Sachs directed Jackson ­- along with John Lithgow, Alfred Molina, and Marisa Tomei­ - in Love Is Strange, a tender, criminally underseen 2014 feature about longterm gay relationships. (Available on streaming services including Amazon and YouTube).

After Ethan and Willow were born, Jackson took a six-month hiatus from work to be a stay-at-home father. But that didn't stop him from exercising his musical talents.

"I sing to my kids constantly," he noted recently from the family's home in Los Angeles. "Sometimes it's children's songs, but there's almost always music playing in our house, so I just sing along. Both kids really respond to music. Their bodies wiggle and their arms and legs shoot out adorably and they squeal. Sometimes I just make up a song for them. Jason does fully choreographed danced routines. They love that, and they laugh hard."

Jackson says he grew up in a house full of music himself.

"My mom always sang to me. She never took a music lesson, but she had perfect pitch and a clear, beautiful voice. She sang folk music mostly: Joni Mitchell, Joan Baez, Bob Dylan-my parents were hippies."

"My mother taught me how to sing harmony when I was five," added Jackson. "There's a song I remember singing with her, 'Oh you can't get to heaven on roller skates/'Cause you'd roll right by those pearly gates.'"

"Lots of subtext in that one," jokes Jackson, whose early Broadway leads included the rolling role of Sonny in the camp extravaganza "Xanadu."

While Jackson now maintains a good relationship with his mother after some uneasiness in the years after his coming out, he says that he'll raise his own kids with slightly different lessons.

"The Golden Rule always applies... but I'm going to be skipping the Bible stories. And I'm going to teach them what RuPaul taught me. Other people's opinions of me are none of my business!"

As his six months at home with the children comes to an end, Jackson says that while "it's been the most rewarding experience of my life, I definitely feel the pressure to be employed because there are two more mouths to feed. I don't fret about it though. My priority is still my relationship with my husband and with my kids.

"We have a nanny who helps out when one of us can't be home during the weekdays," he explains. "But it's just us at night and on the weekends. We love it that way. We want to be there for every single part of their lives. These first six months have already gone too quickly and I don't want to miss a thing."

Close to home in LA, Jackson is starting production on a new television series, American Woman, set in the 1970s and co-starring Alicia Silverstone and Mena Suvari. A late March concert in Florida and his upcoming San Francisco booking are the only out-of-town gigs currently on his schedule.

Jackson's performances here will include some new selections, including a tribute to George Michael, a childhood idol, but also fresh takes on tunes that his cabaret audiences have heard him sing in the past.

"It's interesting what fatherhood does to your storytelling as a singer," he remarks. "I'm finding much more pathos and nuance in some of the songs.

"It's all about my kids right now. And that's exactly the way I want it. I'm sick of it being about me. It's been about me for 40 years. They are much more interesting than me."