Cindy Wilson :: The B52s Cofounder Soars As A Soloist 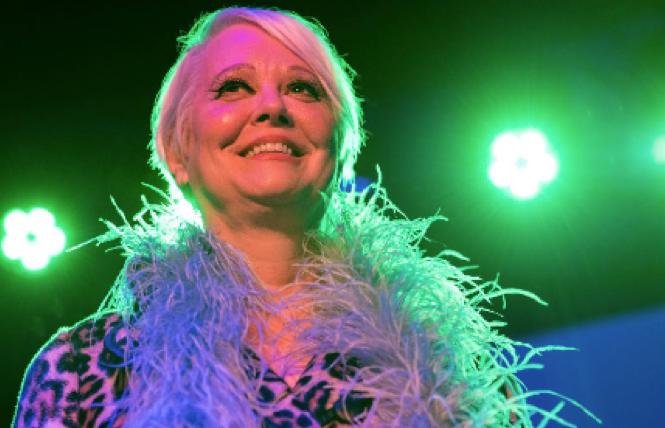 Like her colleagues in the iconic New Wave-rock band The B52s, Cindy Wilson's solo efforts also bring musical joy to fans. Wilson will perform songs of her own in San Francisco on December 12, preceded by a B52s drag tribute on December 10, both at the SoMa nightclub Oasis.

Wilson, 59, continues to tour with The B52s, but is also known for numerous inspiring versions of other artists' songs, from her Georgia pals REM to Screaming Jay Hawkins.

"We do little shows in Athens a lot," said Wilson in a phone interview from her home in Georgia. "I did 'I Put a Spell on You' at one of our Halloween parties, but I haven't had another chance to pull it out and perform it."

Several of her fan-shot performances can be found on YouTube, as well as a few new songs and the somewhat psychedelic teaser for her new solo album.

"We treated it like a bit of an experiment, to see what we could do to make something different, something that my voice hasn't used before," said Wilson of the new sounds. Wilson credits collaboration as the key to her creativity with both her new band and the B52s' four decades of music success.

From their first hit single, "Rock Lobster," the band's music rose to popularity for its cheerful and unusual sound.

Wilson left the band from 1990 to 1994 to raise her family. The band recorded Good Stuff as a trio, and Julie Cruise replaced Wilson on tour. Wilson also took maternity leave in 1999, and returned for the band's greatest hits tour in 2001.

Of her time away from the band, Wilson said, "My clock was ticking, so I chose to take some time off. I was really missing Ricky, and I needed to step back and chill."

Wilson and her husband,Keith Barnett moved from their New York City home of eleven years and went back to Athens, Georgia.

"Little did I know that I was gonna be coming back."

The band had been touring for many years.

Wilson said, "With success, that's when the hard work happens" and the break wasn't about any conflict, but that "every band has tension. At one point we called in a counselor, just to kind of teach us how to talk to each other, if we had things we were holding back, so that was good."

Song for a Future Generation

Asked about the unique harmonies with Kate Pierson that make any B52s song immediately recognizable, and enjoyable, Wilson explained the inspiration.

"I figured out that our harmonies had an almost Appalachian style that you would just make up. That's what we did," she said. "What was great about us starting out is we weren't afraid to be dissonant and combine them with prettier harmonies. That all came out of jamming with Ricky and Keith's music and Fred's creative ideas."

"What was great is, Kate was really easy to work with," said Wilson. "We all hooked into each others' talent and bounced off of each other, and just turn the tape recorder on, just embrace what comes up," Wilson said of unreleased jam sessions and experiments she's worked on with both bands.

"There are hours and hours of jamming that got thrown away," she laughed. "The work includes making time to sift through all the stuff and try to create a song. It's hard work, having so many elements, to make it flow and make sense in its own way."

And while the B52s' biggest hit singles have become party classics, their music also includes messages of hope, love, respect for the environment and other issues.

"A lot of times everyone was singing something different, and it would magically blend," Wilson said of the hybrid themes in their music. "It was amazing how it would turn out. Really, one of our favorite things to do is jamming; building a song that you create together and make into a show; it's amazing."


Detour Through Your Mind

Wilson's talent runs in the family. Her two sons, now teenagers, perform music in stage and marching bands at school, and one son, Nolan, is in three bands outside of school.

"Nolan eats, sleeps and thinks music," said the proud mom. "He reminds me of my brother Ricky as far as his personality and quirky sense of humor."

Of the familial talents, Wilson said, "I think everybody's a genius in some way, but it's really a talent to relax and grab whatever's in the air and go with it."

Wilson, who's never taken music lessons, said, "We take what we have; our limitations can be good, you just go with it."

In creating the B52s songs, and her new solo work, Wilson said, "We didn't follow a music sheet. There were no rules, just a stream of consciousness. We all had influences, but we never had one formula."

In the years between touring and recording their albums, Wilson and her bandmates taken time off for family, and to develop their own music projects. That may be part of why the B52s have stayed together. After their first extended hiatus, their fifth studio album, "Cosmic Thing," included the 1989 mega-hits "Love Shack" and "Roam."

"After Ricky passed away in 1985, we did 'Cosmic Thing' mostly to see if we could get back together," said Wilson. "It was a healing thing. We had no idea it would be a colossal hit. Ricky's spirit was definitely there. It was like it was meant to be."


She Brakes for Rainbows

Since she'll perform at a gay nightclub in San Francisco, and will attend the drag show Mother's B52s tribute, Wilson mentioned that she's quite aware of the band's gay following.

"Even in 2016, people write me and tell me, 'Thank you for your music, it's important.' That's really been sweet."

Wilson even performed at a drag show back in 1989 at Wigstock. YouTube videos show Wilson cheerily singing along to recorded tracks of two songs, while wearing a foot-high birdcage-shaped wig.

"Would you believe that wig is in the Peabody Library in Athens, Georgia?" Wilson laughed. "I think it's in the basement in a vault. My husband and I have a lot of B52s memorabilia, and we just wanted to put it in a better place when they asked for donations."

Wilson recalled a recent Bay Area visit, where she njoyed one of host and Oasis co-owner Heklina's stage shows.

"I was rolling in the aisles, met her, and just fell in love," she said. "I was overwhelmed by how wonderful and delightful folks are in San Francisco. The crowds were like a Beatnik club, with people from all over."

With their trademark beehive B52-bomb-shaped wigs dating back to their early days, Wilson's faux-queen drag affinity is well-known. These days, she sports a stylish pageboy style.

"Definitely, our early days were like an amazing playful kind of dressing up kind of thing, which was a delight. We kind of borrowed ideas from drag queens."

And while the drag show will be wild, Wilson hopes fans will appreciate the more "ephemeral" style of her solo concert on December 12 (In other words, please don't shout out any requests for old B52s songs).

"It's a totally different thing than the B52s," said Wilson. "My band is all about thirty years younger than I am. They're all sexy and good-looking, so everybody can look at them! I found these exceptional musicians who are just kind of magical. I think people will enjoy the show. Let it flow from beginning to end. It's gonna be hoot!"