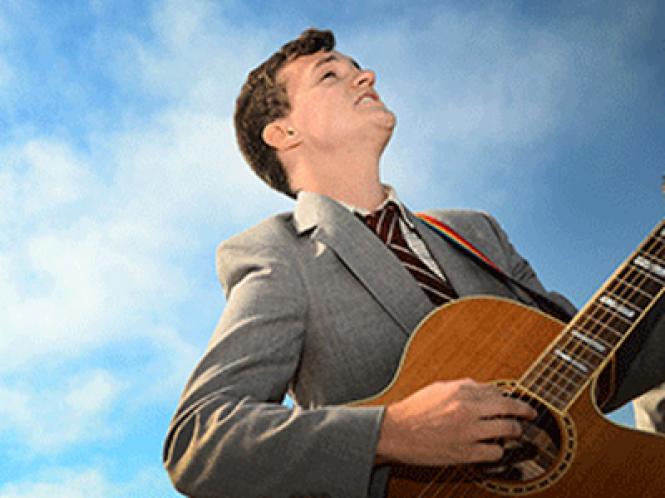 Eli Conley, an East Bay-based singer, songwriter and musician, is thrilled to be singin' and struttin' at El Rio for a rompin' stompin' night of Queer Country. It'll be a night of down home singin' and dancin'; everything you'd expect over at the Grand Ole Opry, with a good ol' Queer twist.

Conley, who identifies as a gay transgender man, and as queer, said in our interview that he's aware of the controversy surrounding the Q word. Huffington Post recently took some heat for changing the name of its Gay Voices section to Queer Voices.

"I respect that for many LGBT people of the generations before me, 'queer' was used toward them as a derogatory term, and it still feels hurtful," he said. "But being born in the 1980s and coming up during a time when 'queer' had been reclaimed by radical groups like Queer Nation, it's always been the term that felt most resonant to me. So we call the series 'queer country' rather than 'gay country' intentionally, both because it's an umbrella term that can include everybody who falls outside of the norms of gender and sexuality, and because of its political implications. We call it queer country rather than gay country because it's not just country music by boys who love boys and girls who love girls. It's ultimately about making country music that is aligned with a politics of liberation for everyone."

Conley, who hails from Virginia, has been immersed in music for most of his life. Country was a big part of his musical education.

"There was always music playing on the stereo around our house, especially folk and country music," he recalled. "My brother once counted and figured out that my dad had about 1,000 records, so I had a rich musical education just poking through my dad's LPs and CDs, listening to Ray Charles, Van Morrison and the Carter Family. I remember when the movie O Brother Where Art Thou came out in 2000, my sister and I were surprised to hear our friends singing songs like "I'll Fly Away" that we'd heard all our life but that no one else ever seemed to know."

"My parents liked to sing around the house, and I really took to music early on," he added. "I was always making up songs and had to be told that no singing was allowed during tests at school. My parents encouraged my creativity by getting me involved in kids musical theater and children's choirs, giving me piano lessons and playing saxophone in the school band as I got older. In an elementary school public speaking competition, I gave a speech about how I wanted to be a musician when I grew up and 'release more albums than the Beatles.' "

Over the years artists such as Loretta Lynn, Johnny Cash, Dolly Parton and Patsy Cline brought country music to a more urbanized audience, with Parton and Cline becoming bona-fide gay icons. Conley addressed the appeal of the genre.

"Country music is about telling true stories in a way that's clear and emotionally accessible," he explained. "Rather than hiding what you mean in poetic language, country music is about telling it like it is, like you'd tell someone in conversation. Because of that, it goes right to your heart. Is there anything as beautiful as a sad country song, or as fun as dancing to a fast tune by an old time string band? Country music often speaks to the difficulties of being poor and working class in this capitalist society, and that's something that many LGBTQ folks can relate to."

Conley is thrilled to be part of Queer Country. His former band, Eli Conley and Hip for Squares, performed at the Trans March and toured California and the Pacific Northwest. They released an album in 2011.

Conley has since recorded as a solo artist. He'll be joined at Queer Country by the sweet porch music and three-part harmony of The Ps & Qs, and the prolific and hilarious songwriter Dillbilly in a new collaboration with Mississippi Mike. There will be dancing when The Ps and Qs start playing. And there's no cover charge.

"Queer country is queer musicians speaking for ourselves through the music we love," said Conley. "Queer country is about reclaiming country music from the people who say you can't be queer and country. How do we do that? By being our fabulous gay selves while making great country music that is relevant to the themes of our queer lives. No one should have to turn their back on the music they love just because they're gay or transgender or queer."