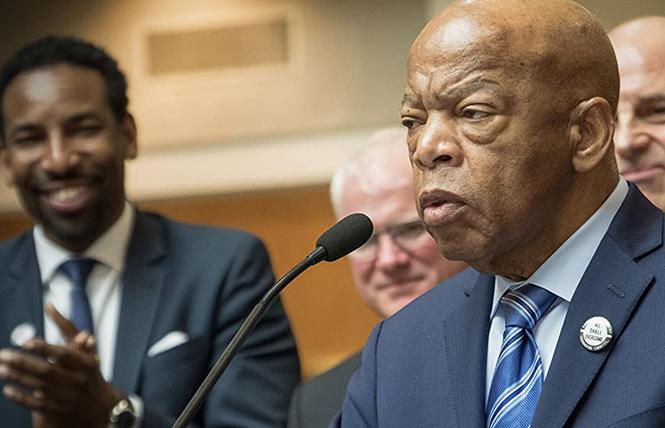 Rep. John Lewis in a scene from 'Good Trouble.'

Rep. John Lewis (D-GA) crossed the Edmund Pettus Bridge in Selma, Alabama on July 26 for the last time, his flag-draped coffin carried on a horse-drawn carriage as befits a fallen hero. On a different Sunday 55 years earlier, Lewis had crossed that same bridge as a Civil Rights activist—and been met by police who beat him so severely his skull was fractured and he nearly died.

Thus began a week of mourning for Lewis, 80, who died July 17 after a battle with pancreatic cancer. On July 27, Lewis became the first Black lawmaker to lie in state in the Capitol Rotunda. Due to the pandemic, his body lay in state briefly under the Capitol dome for a televised ceremony led by Speaker of the House Nancy Pelosi and Senate Majority Leader Mitch McConnell, with a benediction by House Whip James Clyburn. Lewis's coffin was then moved outside to the Capitol steps so the public—in masks and socially distanced--could pay their respects safely over the course of two days. 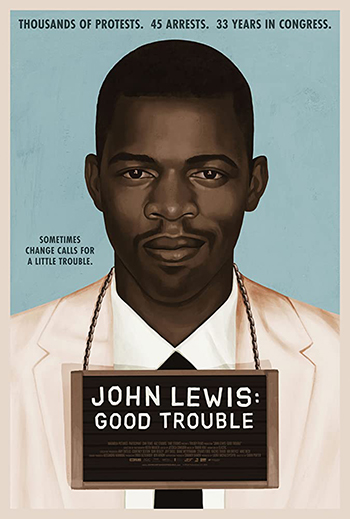 While Lewis is best known for being the young lieutenant to Dr. Martin Luther King, Jr. throughout the Civil Rights movement in the 1960s, he was also a staunch fighter for the LGBT civil rights movement. An outspoken ally before it was a hashtag and well before most other elected officials, Lewis said in 2003, "I have fought too hard and too long against discrimination based on race and color not to stand up against discrimination based on sexual orientation."

As a congressman, Lewis sponsored more than a dozen bills specifically for LGBT rights, including the Equality Act in 2019, for which he gave an impassioned speech on the floor of the House.

Lewis said, "Today is May 17. On May 17, 1954, the United States Supreme Court issued a decision. I remember that decision. I was 14 years old. I thought I would be attending desegregated schools. It never happened for me."

He continued, "Today, on this day, we have an opportunity to send a message now to help end discrimination in our country and set all of our people free."

Lewis had given a different thundering speech against the Defense of Marriage Act (DOMA) in the House in 1996. At that time polls showed nearly 70 percent of Americans opposed same-sex marriage. Yet Lewis sponsored the Respect for Marriage Act, which was intended to repeal DOMA and legalize same-sex marriage. 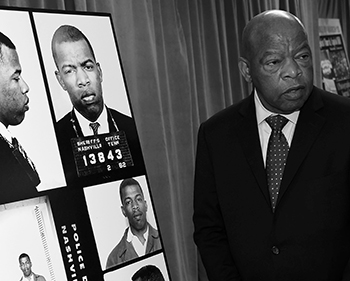 Rep. John Lewis poses with arrest photos from his youth.

Justice for all
The new documentary by Dawn Porter, John Lewis: Good Trouble, makes no pretense of being anything but a paean to Lewis's life and activist work. Erika Alexander, who produced the documentary said, "John Lewis earned his Good Trouble moniker and icon status the hard way; by committing his life to fight for civil rights and 'justice for all' in America. He did it without malice, armed with the courage of his convictions and the abiding philosophy of nonviolence, unrelenting peaceful protests, and love for the beloved community."

The film was made before the current months of protest triggered by the murder of George Floyd, but it feels prescient and prophetic—this is how we got here: through activists like Lewis who set a tone and created a model for "good trouble" —speaking truth to power, no matter the consequence. Lewis himself was arrested 45 times— five of those while he was a sitting congressman.

And Lewis never stopped the sit-ins that he became known for. On the Monday after the mass murder at the Pulse nightclub on June 12, 2016, Lewis led a sit-in on the floor of the House. Then-Speaker Paul Ryan shut down CSPAN and turned off the lights in an attempt to end the sit-in, but Lewis sat crossed legged on the floor at 76, refusing to leave.

Porter's film has a plethora of amazing archival footage. It is perhaps the most compelling element of the film, drawing the viewer into the Civil Rights era with vivid imagery. We see Lewis's early life as an inveterate reader, his activism as a Freedom Rider, his role as the youngest speaker at the 1963 March on Washington who was asked to "tone down" his language so as not to inflame any backlash, his years as chairman of the Student NonViolent Coordinating Committee (SNCC). There is that infamous Bloody Sunday on the Edmund Pettus Bridge that he led. And then there's Lewis's election to the House of Representatives, where he was serving his 17th term at the time of his death.

Interviews with family, friends, colleagues and devotees pepper the film. Lewis's family, the late Elijah Cummings (to whom the film is dedicated) and Hillary Clinton have key roles. Newly elected younger representatives of color like The Squad —Ayanna Pressley, Alexandria Ocasio-Cortez, Rashida Tlaib, and Ilhan Omar— illumine the context of Lewis's activism for a new generation of activist lawmakers.

A portion of the documentary is dedicated to Lewis's role in the passage of the 1965 Voting Rights Act, which was eviscerated by the late Antonin Scalia in the 2013 Supreme Court decision Shelby County v. Holder. Scalia deemed racism over with regard to voting. But waves of voter suppression directed specifically at voters of color in the ensuing years say otherwise.

Georgia politician Stacey Abrams, who has been a champion for voting rights with Fair Fight, says that Lewis "reminds us that our past is not past."

Lewis, who refused to attend the Trump Inauguration and who has been vocal in his opposition to Trump and actions by the administration, says his greatest fear is that he "will wake up and democracy will be gone."

Lewis says, "As long as I have breath in my body, I will do what I can." He made good trouble as long as he lived. This documentary shows that his activist legacy lives on and a new generation —including the three queer Black women who founded Black Lives Matter— has taken up the mantle of good trouble.