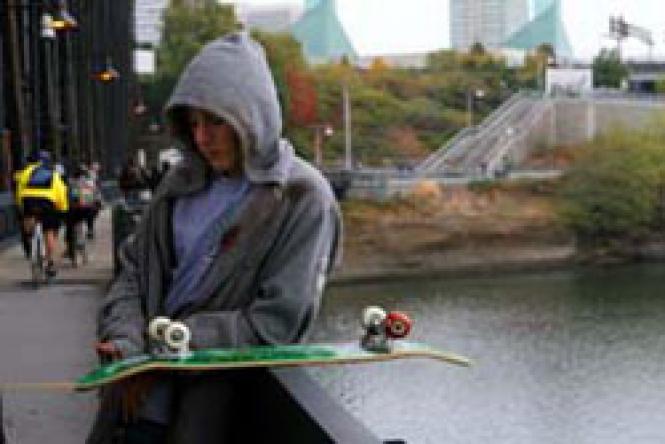 Paranoid Park A nifty touch in the new Gus Van Sant thriller about a skateboarding kid's complicity in the accidental death of a security guard is how deftly the story is cradled inside the head of that kid, Alex (newcomer Gabe Nevins). Freed from the literary stigma of "juvenilia" to which sometime-Portland, Oregon denizen Blake Nelson's novel was consigned, the film of Paranoid Park is beamed exclusively through Alex's consciousness - partly through a running diary, but mostly through a collage of impressions the kid forms about his increasingly chaotic world. There's Alex's frazzled mom; his absent dad; skater buddies Jared, Scratch and Jolt; the pushy, too-available new girlfriend; and teachers, cops and some bald guy on TV with disturbing news.

As with his Columbine-inspired Elephant , Van Sant retains the lovely insider's perspective of floating on the surface of an alien if familiar-looking planet, courtesy of one-time Wong Kar Wai cinematographer Christopher Doyle. It's a kind of teen-inspired tone poem with a soundtrack blending movie maestro Nino Rota, Van Sant's in-house composer Elliott Smith, as well as pop, hip-hop and country: The Revolts, Cool Nuts and Billy Swan.

Paranoid Park, a punk-constructed illegal skateboard park with more baggage than a haunted house, is meant for the too-cool-for-school crowd, a crowd that Alex aspires to but isn't sure he's cut out for. Portland native Nevins is so real that at first he may seem too blandly white bread to hold down the center of a movie that glides over the shadowy boundaries between suburban ennui and film noir. Nevins excels in the darkly lit moments when Alex is starting to cover his tracks from the scene of what he's not sure was even a crime. Actual nakedness - some glorious shower scenes and clothes-changing evidence-removal scenes - clashes beautifully with an ominous interrogation by a stern-looking, bald-headed cop in which the boy's only response to some damning circumstantial evidence is to ask, "So, can I go back to class?" (The filmmaker is expected to be present at the Closing Night, Victoria, 2/17.)

Liberty Kid A bittersweet coming-of-age story is nestled in the turbulent moments after the planes hit the towers. Derrick (Al Thompson) and his best friend, Tico (Kareem Savinon), have first-row seats to history as concessionaires at the Statute of Liberty. The guys quickly become collateral damage as their jobs expire with the indefinite dousing of Miss Liberty's torch. Resorting to half-baked scams in pursuit of elusive dreams, the friendship starts to fray: Derrick is mugged, losing their grubstake from selling drugs to white party animals. Then Tico betrays him over a girl. Writer/director Ilya Chaiken heartbreakingly explores the tender underbelly of an odd-couple friendship. (Roxie, 2/15, 17)

Shotgun Stories Writer/director Jeff Nichols provides a haunting, chilling parable about the wages of revenge. In the beautiful but dirt-poor cotton country of Southeast Arkansas, we meet the brothers Hayes: Son, Kid and Boy. The brothers' alcoholic pop abandoned them years before, and now their heartless mom informs them that their dad is not only dead but being laid to rest by his new family: a loving wife and four properly named sons. The decision of Son (the brooding Michael Shannon) to deliver a brutally honest peroration at the graveside sets off an avalanche of bad feelings between the half-brothers that prompts a deadly clan feud.

Nichols simmers his gripping tragedy in a stew-pot seasoned with the beats of a rural family comedy: Kid lives in a pup tent in the back of Son's shack; Boy is sleeping in his car, whose errant radio periodically provides a joyful wail to momentarily soften a lifetime of hard knocks. (Castro, Opening Night, 2/7)

Row Hard No Excuses This meticulously documented account of two rugged guys rowing across an ocean in pursuit of a cup without a cash prize should be must viewing for anybody thinking about having a mid-life crisis at sea. If they were queer, John Zeigler and Tom Mailhot would be much sought-after bears and daddies. As it is, these straight, married guys seem driven by unresolved daddy issues. If you think that being trapped in a tight space with another guy with a life-or-death challenge confronting you would be a sexual turn-on, think again. Rowing 3,000 miles for six weeks, 24/7, produces body maladies in all the wrong places. First-time director Luke Wolbach is a winner for demonstrating just how cruel and exacting the sea can still be. (Victoria, 2/16, 17)

Bomb It! Jon Reiss' camera takes us on a global tour of a persistent subculture's hot spots: from the Germantown section of Philadelphia, where we meet the world's first tagger, Cornbread; to New York's fabled subway-tagging wars; to the scenes in London, Hamburg, Barcelona, Paris, South Africa, Brazil, Japan, and ending on the streets of LA. With the notable exception of South Africa, where graffiti was involved in the anti-Apartheid movement, most graffiti artists are defiantly apolitical, although some more sophisticated, high-profile artists like Ron English have pointed to his anti-billboard campaign as a form of media politics: "cultural jamming." (Roxie, 2/9, 17)

Alligator on the Zipper This sassy, sexy exploration of the world of female truck-drivers casts a revealing and seriously entertaining look at a widely misunderstood facet of the American economy and rural culture. Ivo Stainoff profiles seven drivers, including a female couple, who all swear by the oddity that this once-male bastion now provides a significant protection from the sins of men to women who can more than hold their own. Queer viewers will love the cleverly partitioned truck cab that allows one woman to hurtle down the highway with her music blasting while her partner enjoys surround-sound movies in the bunk bed. (Roxie, 2/10, 20)

The Bodybuilder and I A young Jewish man seeking to discover why he is still so hung up about his cold, self-absorbed father decides to film dad's journey through the world of straight male bodybuilders. Bryan Friedman, 26, considers the work-out regimen of his 59-year-old dad, Bill, to fall somewhere between pathetic and contemptible - that is, until the son gets to see just what dad endures to be Canada's most well-sculpted geezer. The process of filming the diet, the choreography of training, and the idea of dad's donning a superman jockstrap slowly humanize a man Bryan thought little more than a one-time booze-abusing louse. There are two pivotal moments where Bryan actually gets both parental units to state their cases: one producing still another boy crying, and the latter an unexpected emotional breakthrough. (Roxie, 2/9, 10)

This World of Ours This disturbing post-9/11 inquiry into the sources of adolescent apathy and self-destruction from Japanese wunderkind Ryo Nakajima succeeds in proving that his country's teens, especially the boys, inhabit their own planet. Focusing on a group of friends at a big-city high school, we witness bullying, revenge for bullying, self-mutilation, gang rape, terrorism and boys crying. A journey into the heart of a culture dominated by stifling conformity but offset by operatic eccentricity, This World of Ours will alienate some for its rhetorical excess. But for those able to stay the course, there is food for thought about the culturally-dictated boundaries to male emotional expression. Stay alert for androgynous young male partial nudity in the first half-hour. (Victoria, 2/10; Roxie, 2/11)

Michael Wood is a contributor and Editorial Assistant for EDGE Publications.
Sign up!