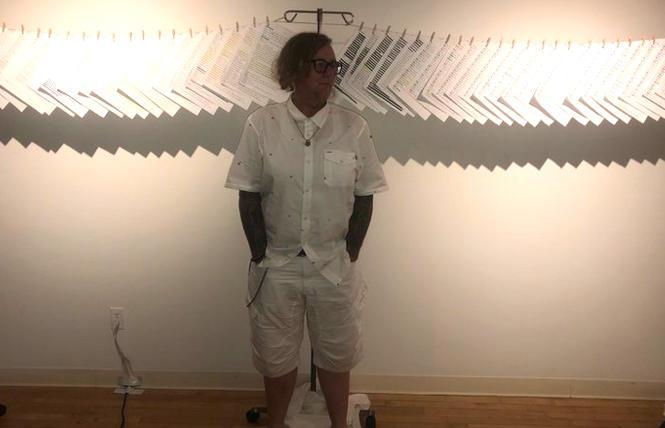 On May 6 and 7 the Spark Arts gallery in the Castro will host a pop art show and a staged reading which will serve as a fundraiser for "We Just Want to Be," an upcoming feature-length documentary that will underscore the violence of conversion therapy.

Dr. Sé Sullivan, 60, knows a thing or two about conversion therapy, as they are a survivor of this horrific practice. Sullivan's advice to others who have been through these "therapies" is simple.

"Find your people and let them love you until you can love yourself," they said in an email interview with the Bay Area Reporter.

On Friday May 6, a free opening reception will display Dr. Sullivan's art, inspired by their experiences. On display will be the doctor's medical transcripts from when they were subjected to conversion therapy more than 50 years ago.

"The theme of the art show is hanging the dirty laundry out," said Sullivan, who identifies as non-binary and trans. "The main piece is called 'Blood on the Page.' Parts of the transcripts are hanging with red paint splattered on them, suspended by clothespins from hospital IV poles."

Also on display will be four large images, hanging from the wall. Three are of Sullivan at different ages while one is at the hallway at the UCLA neuropsychiatric building from a trip that Sullivan took there in 2015 while working on their dissertation.

"There is an exhibition called 'The Closet' which tells the story of how at eight I hid in a psychiatrist's office once a week for several months during conversion therapy sessions," Sullivan continued. "There is a bowl of M&Ms people can take, the candy representing the actual candy while sitting alone in the dark closet of the psychiatrist's office." 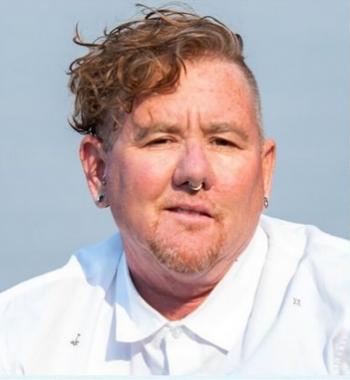 On Saturday May 7 there will be a staged reading, hosted by Sister Roma of The Sisters of Perpetual Indulgence, in which local activists will perform a dramatic reading of Sullivan's medical transcripts from their conversion therapy experience.

Activists taking part in the reading include Susan Stryker and Malachi Garza, as well as Dr. Sullivan themself. Cost to attend the reading is $60. This event is limited to 60 people. Proceeds from the reading will go toward production of the film "We Just Want to Be," which is being produced by Dr. Sullivan and Dr. Mauro Sifuentes.

"The art show and the film project are the natural steps from my dissertation which is what both are based on," said Sullivan. "I feel that in the current climate of anti-trans and anti-LGBTQ bills proposed across the country, the film first and foremost is to help people understand how conversion therapy was developed by extracting data and 'improper' gender from children. These doctors, through their racial and sexual anxiety, placed their research in a white heteronormative middle-class model of inquiry. They developed the pathology and the cure, claiming that trans, non-binary and other LGBTQ children were mentally ill."

Sullivan feels that it is most important to share their story.

"Sharing is not about an 'I' story, it is about a 'we' story," they said. "It is also a love letter to those who have survived by any means and to those of us, of this 'we,' that have lost believing that their divine humanity was deviant, ungodly and not worthy of love."

Ultimately, there is one thing that Sullivan wants the public to know about conversion therapy, "That it is a form of violence that causes lifelong trauma for many survivors."

"We Just Want to Be" pop-up art show and staged reading, May 6 & 7 at Spark Arts Gallery, 4229 18th St. https://www.wejustwanttobe.org/pop-up-art-show-fundraiser

Transmissions: Letters of hope amid the darkness