'Everything, Everywhere' is almost everything 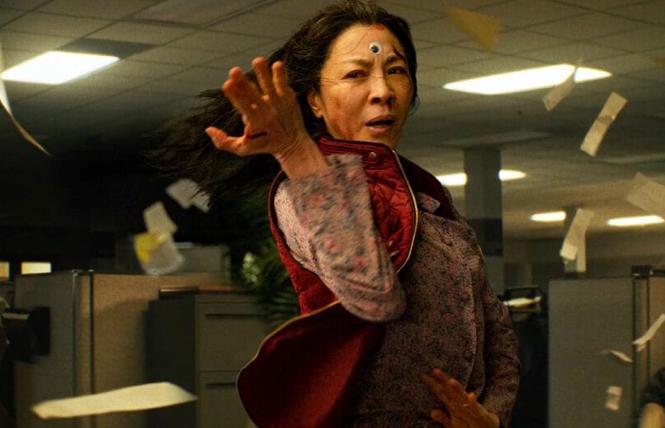 Michelle Yeoh in "Everything Everywhere All At Once," currently screening at several Bay Area cinemas.

Hey, Marvel and DC, there's a new multiverse in town, and it's here to kick both of your tired, sagging asses. In the mind-blowing "Everything Everywhere All At Once" (A24), co-filmmakers Daniels (aka Daniel Kwan and Daniel Scheinert, co-creators of "Swiss Army Man" which they've described as a "gay necrophilia movie") take us on a hallucinogenic journey involving family drama, coming out, martial arts, piles of receipts, silently communicating rocks, Bluetooth earpieces, a laundromat, a fanny pack, butt plugs, a raccoon, an everything bagel, and heartless IRS agents.

Opening as it did in some theaters on April 15 (Tax Day) is only one of the inspired moments connected to "Everything Everywhere All At Once." While it's at least 20 minutes too long, it's worth investing the time for Michelle Yeoh's performance and the dazzling special effects alone.

Laundromat owner Evelyn (Yeoh) is clearly cracking under the weight of external stresses. Deirdre (a fantastic Jamie Lee Curtis) is the relentless IRS auditor gunning for Evelyn. Poor Evelyn is unable to make sense of the bottomless stacks of receipts and paperwork on her desk, despite the approaching deadline.

Waymon (Ke Huy Quan), Evelyn's long-suffering husband, is waiting for the right moment to ask her for a divorce. Joy (Stephanie Hsu), Evelyn and Waymon's lesbian daughter, wants to bring her girlfriend Becky (Tallie Medel) to the party being thrown in the laundromat for Evelyn's father Gong Gong (James Hong). However, Evelyn is against Joy introducing Becky to Gong Gong as her girlfriend.

On the way to an appointment with Deirdre in the Simi Valley IRS office, Evelyn's fantasy world begins to reveal itself. In the elevator, Waymon slaps a pair of Bluetooths on his wife, and the multiverses rev their engines. According to one of Waymon's multiple aliases, Evelyn is the last great hope to save her universe from an evil being known as Jobu Tupaki (also played by Hsu) who is determined to destroy all parallel universes.

What happens over the course of the next two hours is visually captivating, laugh-out-loud hilarious, and tear-jerking touching.

There's a lot to keep track of, and the action is rapid-fire, so you may find yourself resisting the urge to blink in the event that you might miss something.

Ultimately, "Everything Everywhere All At Once" is a story about the struggle for acceptance, from parents, from people in power, and from personal and professional acquaintances. It's about old-world values banging into rapidly evolving 21st-century cultural and societal ideals.

Sure, the fight scenes go on ad nauseum (good time to blink), however, the one with the phallic trophies which function as jump pads shouldn't be missed.

Yeoh and Curtis are sensational, as is the supporting cast, including Hsu, Quan, Hong, and even Jenny Slate (as a disgruntled customer). One can only imagine how the Daniels will ever be able to top this film.
Rating: A-