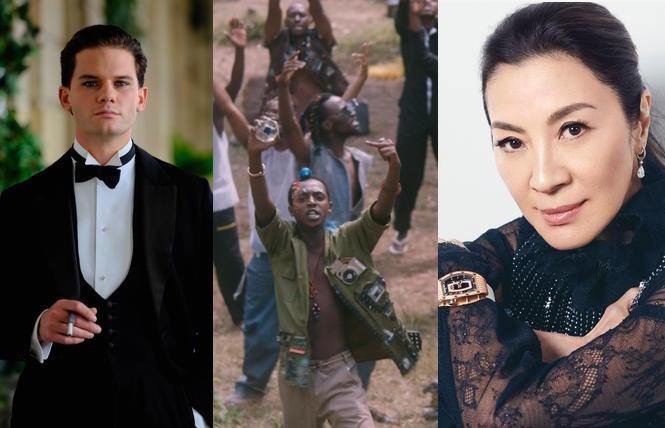 "In the past two-plus years, we never stopped sharing movies, even when we had to be apart. We believe that film lovers and filmgoers of all stripes are hungry and ready to go out, to have fun, to have an experience that disappeared from our reality for a long time, but never in our imagination.

"Our belief in this intrinsic power of film, as well as its ability to bring us closer with each other and our own humanity, fuels the Festival," was the opening comment from relatively new SFFilm Executive Anne Lai, at the press conference announcing the full lineup for the 65th annual San Francisco International Film Festival, the longest running film festival in the Americas.

This year the festival will return to theaters (Castro, Vogue, Roxie, Victoria, Pacific Film Archive) in person from April 21 through May 1, featuring more than 130 films from 56 countries, including 16 World and 10 North American premieres, along with eight SFFilm-supported titles.

Lai proudly announced that 56% of the films are helmed by female or non-binary filmmakers and 52% are directed by BIPOC filmmakers. Because of the pandemic, the Festival has been streamlined, offering fewer films than in the past.

SFFilm Director of Programming Jessie Fairbanks announced the Festival will celebrate cinematic icon and LGBTQ favorite Michelle Yeoh (Crouching Tiger, Hidden Dragon, which will be screened at the Castro). Yeoh will be interviewed by Emmy-Award-nominated actress Sandra Oh (Killing Eve) at the Castro on April 29 in a special tribute to Rotten Tomatoes' greatest action heroine of all time.

SFFilm always features several queer-related films, though there are only a handful this year. The most exciting entry is Benediction, which will open in early June, the latest by one of the world's greatest gay directors, Terence Davies (Distant Voices, Still Lives; The Deep Blue Sea), about the turbulent life of acclaimed gay World War I poet Siegfried Sassoon (Jack Lowden), featuring archival footage and catty dialogue, charting the development of his antiwar position. It promises to be one of the standout LGBTQ movies of the year.

Another potential winner is the English documentary Nothing Compares, profiling bisexual Irish singer-songwriter Sinead O'Connor, both her career rise and ensuing controversial stances, arguing how ahead of her time she was.

An American documentary Jeannette portrays a competitive bodybuilder and queer single mother, coping with trauma in the wake of the Pulse Nightclub shooting.

For the experimental crowd, a movie from Rwanda, Neptune Frost offers mind-altering visual and sonic imagery, an Afrofuturist mélange of music, poetry, and resistance, in a visionary depiction of a genderqueer community of hackers and techno poets.

An Argentinian narrative film, Sublime is a coming-of-age tale as teenage bass player Manu, part of a garage rock band, seems to be falling in love with his BFF and bandmate Felipe.

A mid-length film, My Dear, from Portugal, by a young Chinese filmmaker (Aragon Yao), explores expressions of sexual identity in this essay about queerness, immigration, and performance.

There is also the long overdue return of gay director Scott McGehee (Deep End, What Maisie Knew) along with his co-writer/director partner David Siegel (they're not a couple) with their Montana Story, starring Haley Lu Richardson and Owen Teague as estranged siblings who return to their dying father's ranch in a moving drama about healing. Early reviews suggest a possible rave.

As usual, the festival will offer some talks, mostly online. One that seems relevant to LGBTQ folk is "Crossings: Navigating Visibility" discussing the limited, inconsistent, and frequently nonexistent accessibility in the American film industry. Too often colleagues are overlooked or marginalized to the point of invisibility. How can a fully accessible film industry be created? One of the panelists is Dawn Valadez, a queer, Xicana, feminista filmmaker.

Another live talk, "Homebase: A Spotlight on Bay Area Talent," will report on the Bay Area film scene's shifting landscape, with filmmakers sharing insights and resources that have strengthened their work. One of the panelists is Lex Sloan, Executive Director of the Roxie Theater. She is also an accomplished filmmaker with a passion for social justice and equity, producing the award-winning web series, Dyke Central. Sloan is committed to ensuring that queer history is preserved and shared through the power of cinema.

Finally, "Keep It Brief: Short Films on the Rise" explores how short films, once seen as just stepping stones to feature films, with the advent of streaming services, are now more accessible than ever, with audiences appreciating their vivid and concise storytelling.

The talk will delve into the current and future state of short-format cinema, with one of the panelists being Natalie Jasmine Harris, a Black queer filmmaker from Maryland, whose most recent short film, Pure, received the 2020 Directors Guild of America's Student Film Award and is now streaming on HBO Max.

There are other films of general interest to LGBTQ audiences. Bitterbrush is an illuminating observational documentary on seasonal cattlewomen Hollyn and Collie, as they herd livestock in the remote, isolated, and rugged mountains of the American West.

Sell/Buy/Date is a hybrid documentary in which Tony Award-winning performer and playwright Sarah Jones travels the country to interview real-life sex workers. The executive producer is actress Meryl Streep.

A mid-length documentary, American Justice on Trial revisits the forgotten story of the 1968 death penalty case that put racism on trial, in which Huey Newton, Blank Panther Party co-founder, was accused of killing a white policeman and wounding another at a pre-dawn car stop in Oakland. Newton's defense team redefined a "jury of one's peers" that led to a shocking verdict.

The TikTok Boom documentary explores the most popular platform for creating personalized content, but spotlights the darker issues of censorship and data-mining behind all those cute videos.

And in another documentary seemingly ripped from the headlines, Navalny investigates the question of who tried to kill the now-imprisoned Russian opposition leader with a deadly nerve poison during a flight from Siberia to Moscow in August 2020.

The international narrative Sonne, from Austria, considers three teenage girlfriends (one a Muslim), whose home video to R.E.M.'s "Losing My Religion," becomes an unexpected viral sensation in Vienna.

The opening night narrative film Stay Awake examining the opioid epidemic, follows two teenage brothers as they pace the streets searching for their painkiller-dependent mother Michelle, played by This Is Us star Chrissy Metz, who will appear at the Castro Theater.