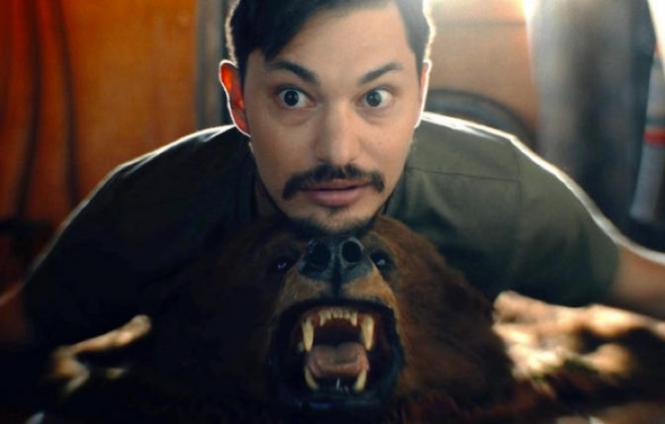 The main character, Will, is played by Villa, who studied at the Juilliard School and Interlochen Arts Academy. He is perfectly cast as a likable young Hispanic gay artist (a potter) who seems to have all of life's advantages, including the support of an understanding boyfriend.

Refreshingly, the LGBTQ community is featured prominently in the film while no big deal is made of Will's gay identity. Perhaps there is something inherently queer about the horror genre, just as narcissism is inherently inward looking and homoerotic, perhaps even feminine. At any rate, Hypochondriac further demonstrated that queers certainly do horror skillfully, particularly psychological horror.

The film takes a sudden turn when Will's bipolar mother comes back into his life after ten years of silence, it pushes him over the edge, plunging him back into the trauma of his childhood.

The film gives hints that his mother's mental condition either resulted from —or was very much exacerbated by— her marriage. His father prefers to coldly, silently call the police on her rather than address her complaints, escalating the situation when things could have been handled much better.

In similar fashion, although minus his parents' cruelty, Will refuses to discuss his growing fears and traumas with his boyfriend, even though he's encouraged to open up. Here too, there seems to be a mismatch.

Although Will and his boyfriend have a very good, accepting relationship that is infinitely healthier than his parents' sick marriage, it becomes clear that his boyfriend has no way of understanding what makes Will tick. 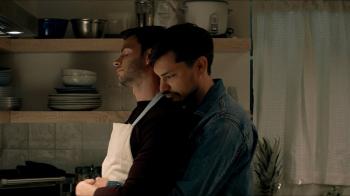 This is painfully clear in the scene of Will stretching out on the bearskin rug, marveling that he can feel the amazing power of the beast. In contrast, the boyfriend feels nothing. They just aren't on the same wavelength.

Left to face his demons alone, the fear and trauma progressively manifest throughout his body until he becomes horrifyingly, hauntingly ill. If only he had had a friend who understood what he was going through.

For example, years ago I encountered a young man who confessed that he felt he had a wolf spirit following him like the one Will has in the film.

In the film, the wolf is depicted as a person wearing an almost-humorous wolf outfit, but the actually experience as described to me by this young man was very damaging to him. The wolf might be a symbol of one's personal greed. He felt the trouble started when he saw a werewolf movie that he very much began to identify with.

But I would be remiss if I did not mention the cure: he claimed that overcoming mental detours is as simple as remembering one's north, like a compass. For him, it was praying, fasting and casting out his demons 'in Jesus' name,' in the certainty that God did not create us to be trapped in fear. He worked very hard to also heal the root of his greed, which is a sense of lack, and to replace it instead with a feeling of being supported by the universe and all of creation. You are here because you belong here. And you are supported by every molecule and atom.

The end of the film, too, is hopeful. Although the wolf is still with Will in the last scene, they have found a way to co-exist peacefully. Perhaps the answer was as simple as not going down the rabbit hole of fear of illness. Just say no and release the past, demanding to live his life on his own terms as he deserves to be able to do.

Hypochondriac is Addison Heimann's long-awaited first feature film. He confides, "Hypochondriac is the story of my mental breakdown. Not an exact retelling, but an emotional one — taking my broken heart at the time and turning into something that feels exactly how it felt to lose control. I'm thrilled to be partnering with XYZ to elevate such a personal story about my life in hopes that maybe people will see it and feel less alone in their struggle."

"Addison Heimann is one of the most exciting genre filmmakers out there and Hypochondriac is an incredible feature debut," said XYZ's Head of Domestic Distribution, James Shapiro. "It's a fact that Horror has always been queer and Addison's goal in life is to elevate and empower LGBTQ characters in the genre space and I'm beyond excited to help him do that."

Heimann's previous short films and web episodics have been screened at Outfest, the Chicago International Film Festival, Fantasia, Inside Out, Atlanta International, the Nashville Film Festival, and the New York Television Festival to name a few. His work is available online on Dust, Omeleto, Film Shortage, and Revry.

Hypochondriac debuted at SXSW on March 14. XYZ Films is distributing the film digitally and nationwide in US theaters.

Michael Nava's 'Lies With Man' brings back the mystery
Sign up!