'Compartment No. 6' - a train journey worth boarding 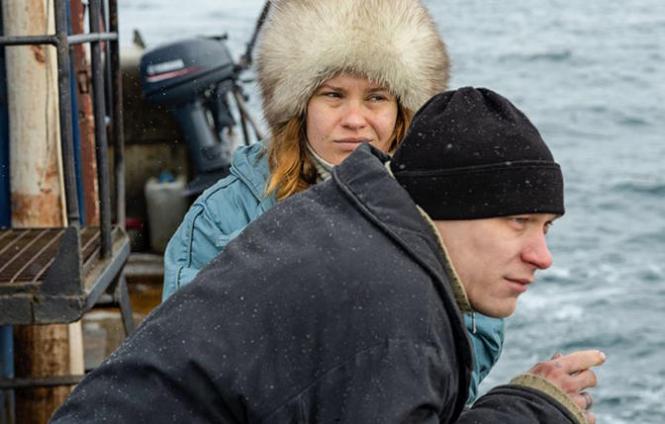 Seidi Haarla and Yuriy Borisov in 'Compartment No. 6'

In Hollywood, timing is everything. And the new film Compartment No. 6, screening in Bay Area theaters, although created by Finnish director Juho Kuosmanen (The Happiest Day in the Life of Olli Maki) has the misfortune of occurring in Russia, when now anything Russian seems unpalatable even traitorous.

However, the movie isn't about Russia per se, but boasts a universal theme of connection and acceptance in a world of chaos and anxiety, which during this current crisis, is not only timely but instructional.

Adapted from a popular 2011 Finnish novel by Rosa Liksom, Compartment is an arctic road movie set in late 1990s Russia following the collapse of the Soviet Union. It features a train showcasing two lost-soul riders, a grittier, less romantic reimagining of Before Sunrise, minus any Western clichés or conventions.

Finnish student Laura (the superb Seidi Haarla) studying Russian and archaeology, attends the party of her professor and lover Irina, the night before leaving on a long railroad trip from Moscow to the city of Murmansk (north of the Arctic Circle) to see the recently discovered Kanozero Petroglyphs, 6000-year-old ancient rock carvings. She's intoxicated by the bohemian academic sophistication of the intellectual guests, even though they and Irina gently humiliate her mousy naiveté.

She feels uncomfortable, out of place. Laura is infatuated with Irina, but ominously, the latter has canceled accompanying her, pleading work as an excuse. In freefall, Laura takes a colleague's advice that, "It is easier to understand the present if you study the past."

With her camcorder to record videos and a Walkman to listen to music, she travels alone, forced to share her dingy compartment with Ljoha (the excellent Yuriy Borisov), a boorish drunken lout on his way to Murmansk to work as a coal miner.

He thinks Laura might be a sex worker and crudely grabs her crotch. Laura flees his aggressiveness, attempting to switch berths, but the train conductor informs her all the cramped compartments are filled, with the taunt, "You think you have a choice?" She is stuck with Ljoha in their tight quarters, suggesting a bumpy ride, even inventing a boyfriend as a protective maneuver.

Slowly they open up to each other, with both characters simultaneously conveying both attraction and repulsion. At one point in frustration, Ljoha yells, "All humans should be killed," which in light of Ukraine, dumbfounds us with horror.

Both are lonely and defensive. Laura learns to surrender her guarded phony façade, showing how heartbroken and emotionally afloat she is, while the restive Ljoha reveals a tender vulnerability and generosity of spirit. Laura pines for Irina, but in phone calls it becomes apparent Irina doesn't share the same ardor and has moved on. Later Ljoha will help in her hour of need, with Laura finally understanding who are her real friends.

With Kuosmanen's knack for setting an atmospheric mood, you can smell the smoke and stale alcohol in the air, experience the clackety-clack jerky motions of the moving railroad cars, and feel the bone-chilling cold. Unpredictability reigns in this inhospitable, forbidding otherworldly landscape as they approach the Barents Sea, site of the petroglyphs. Surprisingly, the film isn't as talky as one might presume, with ambience and gestures nimbly substituting for words.

Early on, Ljoha asks Laura, "You think I'm a bad guy," to which she replies, "I only know what I've seen." But what each sees in the other will change throughout the lengthy trip, realizing they are more alike than initially suspected. Laura learns to let go of past expectations and trust her own inner voice, accepting who she is, despite her flaws.

Road trip
As with most road movies, it's the journey rather than the destination that counts, yet both characters view the world a bit differently as a result of their encounter, especially Laura, who feeling more connected to life, begins to discern her place in the world.

In the press notes, Josmanen writes, "Freedom isn't an endless number of options but rather, the ability to accept your limitations. A train ride is more like destiny. You can't decide where to go, you just have to take what it gives you." 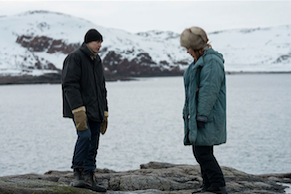 Yuriy Borisov and Seidi Haarla in 'Compartment No. 6'

In a sense when one meets a stranger one can re-invent oneself, become something one yearns to be. Yet even in subterfuge one is given an opportunity to learn something new about oneself. Even though what Laura and Ljoha have are only fleeting moments, like the petroglyphs permanently altering their environment, they leave a mark on each other.

This film is a beguiling offbeat charmer that emotionally grabs you when you least expect it. The musical soundtrack compliments the action, such as when Laura attends the Moscow party, the stereo blasts Roxy Music's "Love is the Drug," a perfect choice. One shudders to think how Hollywood would remake this movie, no doubt reconfiguring the friendship element into a moronic rom-com.

Underlying Compartment is the question; in a world seemingly connected by technology, why do we feel so isolated from each other? In this beautifully etched cross-cultural exercise, the film urges us to go beyond surfaces and assumptions we make about one another, to risk letting our guard down and be vulnerable to the moment, a message in these violent, bitter, partisan times that we ignore at our peril.