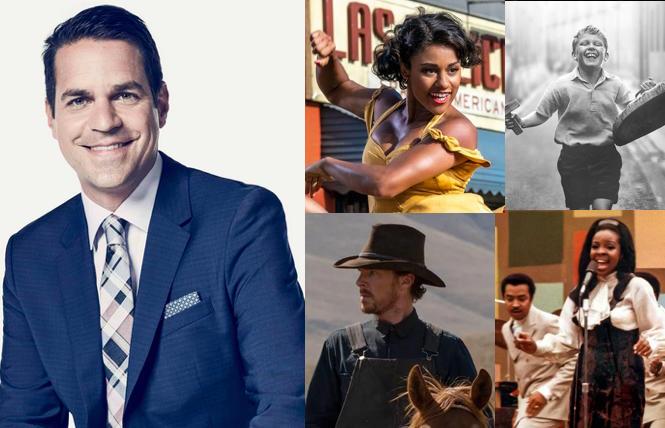 Probably few people love films as much as Dave Karger, who has developed a career promoting them, especially the ones from Hollywood's Golden Age. An all-around entertainment expert. Karger is the host of Turner Classics Movies (TCM), having been named the official host in 2018, following the death of his legendary predecessor Robert Osborne. Like Osborne, Karger is gay. In 2014, he was named one of OUT Magazine's "OUT 100," acknowledging his status as among the most influential people in the LGBTQ community.

From 2012 to 2016, Karger served as Chief Correspondent at Fandango (since taken over by VUDU), creating and hosting the original video series The Frontrunners, which received a 2013 Webby Award nomination for Best Variety Series. Prior to that accomplishment, he spent 17 years as a senior writer at Entertainment Weekly, where he wrote more than 50 cover stories on many celebrities, such as George Clooney, Elton John, Taylor Swift, and Denzel Washington, among many others.

In this Oscar season, TCM's traditional "31 Days of Oscar" celebrated the winners, with each film having won an Oscar, thus 24 hours of Academy Award-winning movies every day. Karger is very familiar with the Oscars, having co-hosted ABC's Live from the Red Carpet on Oscar night 2018. In 2012 and 2013, he was the Academy's official red-carpet greeter on Oscar night, only the third person to hold that post. Karger, 49, spoke with the Bay Area Reporter via email.

Class acts
Karger wanted to acknowledge how Osborne paved the way for him at TCM.

"Robert was the definition of a class act," wrote Karger. "I had the chance to co-host with him in 2007 and it was a wonderful experience. I definitely feel a kinship with him. We both started as print journalists, we both did stints as the official red-carpet greeter on Oscar night, we share many of the same favorite films like Laura and Dodsworth, and we both love a good suit."

Among his Oscar predictions is The Power of the Dog as Best Film. However he's reluctant to consider it a gay film, even though it's the tale of a closeted homosexual rancher in 1925 Montana.

"I think calling it a gay film limits its thematic ambition and impact. I'd say (director) Jane Campion has bigger fish she wants to fry with this project. I also feel like a movie needs to have several LGBTQ characters to qualify and I'd argue this film has only one gay character."

When asked why so few queer films are nominated for Oscars, Karger observed, "There still aren't too many LGBTQ-themed films being produced to begin with. And the Academy voting body is still an older group despite recent efforts to make it younger and more diverse. I remember well when (actor) Ernest Borgnine, who built his career on audiences' willingness to accept atypical leading-man characters, refused to even watch Brokeback Mountain when it was nominated. So, LGBTQ films have a higher hurdle to jump simply because some people won't even give them a chance."

Karger isn't sure if it's easier for queer actors to come out now.

"It's still such a complex issue. On one hand there are so many more opportunities for different performers, particularly on TV. But there's still a part of the population that is distracted by an actor's personal life."

Some commentators have wondered that if Kristen Stewart wins Best Actress for her performance as Princess Diana in Spencer, whether she would be the first openly gay person to win an acting Oscar. But Karger notes, "Again, it's complex. John Gielgud was widely known to be gay when he won (Best Supporting Actor, Arthur, 1981) even if he didn't talk about it. And Angelina Jolie (Best Supporting Actress, Girl, Interrupted, 1999), has spoken openly about her bisexuality even before she won."

As for LGBTQ actors only playing LGBTQ roles, Karger responds, "I do agree that LGBTQ actors should be given more opportunities than they have in the past. But I'm not for a blanket rule that says only gay actors should play gay roles, just as I don't think only straight actors should play straight roles. If straight actors weren't allowed to play gay roles then we would have missed out on Christopher Plummer's remarkable performance in Beginners (Best Supporting Actor, 2010). Straight actor Plummer played a man who comes out as gay at age 75 after his wife dies.

Islands in the Stream
Streaming movies did very well in this year's Oscar nominations, scoring three out of the 10 Best Picture nominees (Power of the Dog, CODA, Don't Look Up), yet Hollywood is nervous about their ascendancy as a way to view movies, fearing they will cut box office theater revenues.

In 2015, the Academy of Motion Picture Arts & Sciences awarded all 20 acting nominations to white actors for the first of two consecutive years leading to a huge backlash, #OscarsSoWhite. Have they made any progress in diversifying the awards?

"Overall, I'd say the film industry is better in general when it comes to telling non-white stories," Karger replied. "So I expect the Oscars to continue to follow suit. It won't happen every year, but the trend is certainly improving."

Up until very recently, Hollywood has been homophobic (and some might say still is), yet Karger's experience as a gay man navigating Hollywood as an actor, writer, and interviewer has been largely positive.

"For the most part it's been a non-issue or has even helped. I know of one major network TV opportunity that I was denied in part because there were other LGBTQ people on the show and the producer didn't want another. But as the only LGBTQ host at TCM, I feel like that part of me is truly appreciated and celebrated."

In reference to TCM's '31 Days of Oscar,' for LGBTQ audiences, Karger recommends All About Eve, All About My Mother (the Spanish Pedro Almodovar film), Cabaret, Whatever Happened to Baby Jane, and The Times of Harvey Milk. Other general favorites of his, showing in March include Dodsworth, Laura, Network, The Red Shoes, The Razor's Edge, and A Fish Called Wanda.

When questioned what are his five all-time favorite LGBTQ films, he chose Portrait of a Lady on Fire, Beginners, Boys Don't Cry, Brokeback Mountain and The Celluloid Closet.

Since Karger qualifies as an Oscar expert, he easily named his three most cherished Academy Award moments in history.

"Halle Berry's speech is one I'll never forget [the first and only African-American woman to win Best Actress, 2000, for Monster's Ball].And I was so thrilled when Hilary Swank won for Boys Don't Cry, [playing murdered transgender Brandon Teena]. I also remember being blown away by the late Aaliyah's performance of "Journey to the Past" in 1998 [nominated Best Original Song for Anastasia] which was the first Oscar ceremony I attended in person."

Predict the picture
Finally, we couldn't leave without asking Karger his other Oscar predictions. He believes Will Smith will win Best Actor as Richard Williams, father of tennis champion daughters Venus and Serena for King Richard. Nicole Kidman will claim Best Actress for her performance as television doyenne Lucille Ball in Being the Ricardos.

Jane Campion will be rewarded for her direction of The Power of the Dog, the first woman to be nominated twice in that category and according to Karger, will also win Best Adapted Screenplay. Also likely is British actor/director Kenneth Branagh getting another Oscar for his original screenplay in his own coming-of-age tale in 1969 war-torn Ireland, Belfast.

Finally, Karger predicts Summer of Soul, which examines the forgotten 1969 Harlem Cultural Festival that lasted for six weeks and featured such eminent black musicians as Stevie Wonder, Mahalia Jackson, Nina Simone, The 5th Dimension, Gladys Knight & the Pips, and Sly and the Family Stone, will emerge as Best Documentary.

For Karger, the biggest Oscar snubs this year were the omission of Lady Gaga as Best Actress for her campy performance as Patrizia Reggiani, who had her husband fashion designer Maurizio Gucci killed in House of Gucci, as well as Denis Villeneuve's omission as Best Director for Dune.

"As for Lady Gaga, I'm not sure what happened," he said, "aside from the fact that Best Actress was the most crowded category this year."

"I am simply in awe of great actors and actresses. What they're able to do is so miraculous to me. I'm also a sucker for sentimentality so I find myself drawn to those types of films. I've loved my entire 27-year career because I've been able to talk to so many wonderful creative people. Critic Roger Ebert famously called films 'empathy machines.' I love that phrase so much and I think that explains why we all love movies and need them."