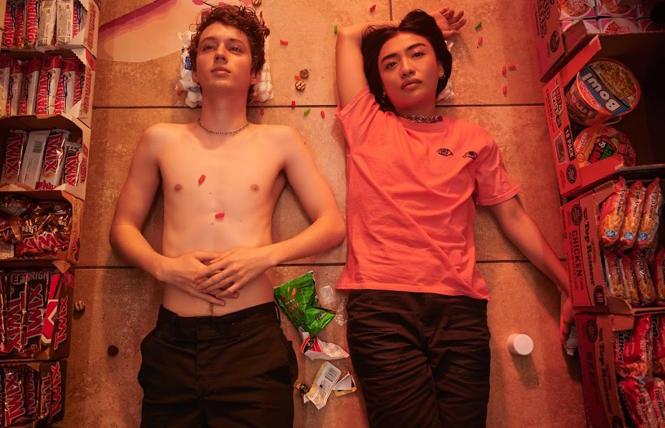 Three Months, the new film by Jared Frieder streaming on Paramount+ starting February 23, is an AIDS drama for the millennial generation. Set in Hollywood Florida in 2011, the film stars gay actor/singer Troye Sivan as Caleb, a young gay man graduating from high school who may have been exposed to HIV during a one-night stand with a foreign tourist.

As he waits for his final test result over a period of three months, Caleb hangs out with his lesbian best friend Dara (Brianne Tju) and has a summer romance with a closeted young man from India (Viveik Kalra). He also watches The Real World: San Francisco, an MTV-produced reality series from the 1990s featuring the late Pedro Zamora, an HIV-positive young man who may have been the first out gay person to appear on television and to get a national spotlight.

It's an important film for younger generations to see. Frieder's screenplay underscores the fact that AIDS is no longer the death sentence it was years ago, and that it is possible for people to live full, rich lives while living with HIV. 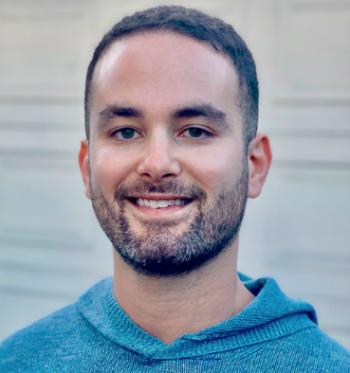 "A lot of the experiences I've had I wanted to reflect in this film," Frieder said. "But the real reason I wrote it is, this is the type of movie with a queer protagonist that I wish as a queer kid growing up in Florida that I had. It would have made me feel a little bit less alone and more understood. It's important for me to tell stories like that so I can hopefully do the same for others."

And there is indeed a lot in the film that younger generations can relate to. Caleb, whose father had died of a heart attack some years ago, lives with his grandmother (Oscar winner Ellen Burstyn) and her live-in boyfriend (Oscar winner Louis Gossett, Jr.). They accept Caleb for who he is, though his mother, an Orthodox Jew, does not.

In a scene that bristles with intensity, Caleb reaches out to his mother after he's dumped by his boyfriend. Mom, whose religious beliefs do not allow her to be tolerant of Caleb's lifestyle, backs away when he begins talking about the fact that he may have contracted HIV.

Frieder made a surprising choice when writing his screenplay. He does not let the audience know Caleb's final test result.

"For me the whole message and the point of the film is that he's going to be okay, no matter what," Frieder said. "It's one of the first things when I first started crafting the script that I knew would be a part of the story because I want to create that dialogue, that conversation. I want to get in the pool and splash around and say hey, look over here, let's talk about this thing that we're not talking about."

The auteur hopes that viewers will in fact talk about the fact that HIV is no longer a death sentence.

"We need to fight the shame and stigma and the deeply rooted homophobia around the disease," he said. "I think that it's also a movie about what it's like to wait, and I think that's never been more relevant than right now, as we're all waiting in a Covid-19 pandemic for the world to resume. Yes, we have to wait, but we should fight for the things we want while we wait and continue to live life."

Burstyn's role in the film is relatively small, but the veteran screen legend, whose acting career goes back more than fifty years, gives a strong performance as an old woman who struggles to be the mother that Caleb needs. Frieder has nothing but praise for the actress.

"Sometimes I feel like it was a dream," he said of Burstyn. "Am I going to wake up and I imagined all of this? She is one of the reasons I got into the art of making films."

Frieder named some of his favorite Burstyn films, such as Requiem for a Dream, The Last Picture Show, The Exorcist, and of course Alice Doesn't Live Here Anymore, the film for which she won her Oscar.

"She's inspired me since I was a kid," he said. "And so to be able to work with her and to listen to her and to learn from her, and to watch how she inhabits character, how she humanizes these stories and operates as an artist is something I will take with me for the rest of my days." 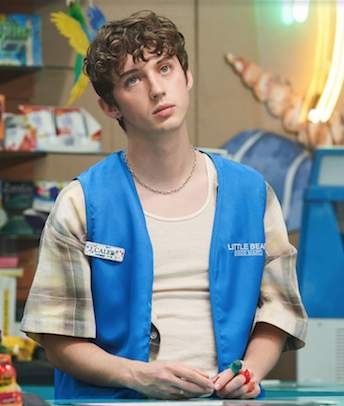 Frieder had similar praise for his star, Troye Sivan.

"He is such a talented actor, and I've always been a fan of his as a musical artist and a singer and musician," Frieder said. "I love pop music. And so to be able to see him do his first lead role as an adult, where he's literally carrying the film on his back. He's in every scene, he has to express every emotion. And he does so in such a naturalistic, grounded, authentic and honest way, but with a magnetism that makes you unable to move your eyes from him. I think that people are going to be truly astounded by his work in this film."

Frieder feels that it's important for people to be out. As a Floridian he's appalled by the state's so-called 'Don't say gay' bill, which would prohibit the word gay, or any discussion of homosexuality or gender identity, from being mentioned in schools. Homophobic Florida Governor Ron DeSantis has expressed support for the bill.

"Luckily. my parents are incredibly compassionate people who helped fight for my rights," he said. "I'm so grateful to have been in such an accepting family who celebrate my sexual identity. But I know all too well that there are so many people I grew up with who did not have that experience, and for me to be an out filmmaker who can be out and proud and show people there is nothing to be ashamed of, in fact my sexual identity is one of my favorite elements of my identity, it brings me all my joy. I'm so proud of it, and hopefully that can inspire and help other people to come out when they feel safe enough to do so."

Frieder hopes that his film will help to bring about some compassion towards LGBTQ people. "I really hope this movie gets to do that."

Look for Three Months on Paramount+.

'Flee,' a tale of escape, coming out and finding love