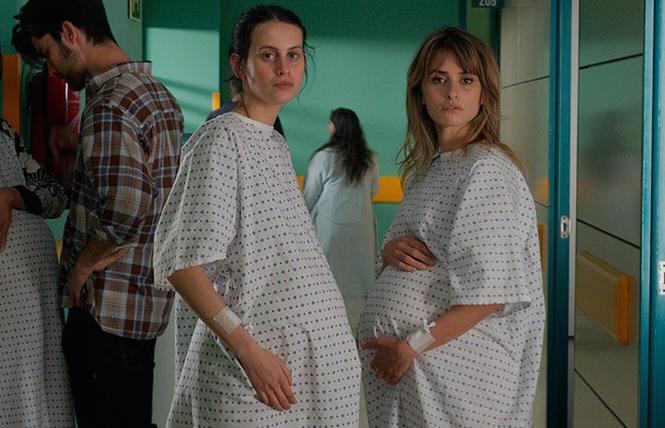 Pedro Almodovar is arguably the world's greatest gay director. He portrayed queer relationships in all their candidness and complexity for decades, long before it was acceptable to do so in mainstream cinema.

Remarkably, he was able to accomplish this feat in Spain, a conservative Catholic country. He challenged sexual taboos as well as boundary confusions of sex, gender, and identity with his early use of outlandish humor. His ability to be empathic to social outsiders (especially trans characters) always finding them redeemable, remains unmatched.

Since 2016's Julietta, Almodovar has moved away from his outrageous pop transgressive kitschy aesthetic, reducing the ridiculous elements, absurd narrative, and visual excess. In these mature films he has adopted a more naturalistic serious storytelling mode.

Still, he has never abandoned his Sirkian melodrama (with its extravagant coincidences) and subversive comic elements, complete with his bright splashy color palette (though less lurid production design and costumes) and penetrating propulsive music (care of composer Alberto Iglesias, a collaborator since 1995).

With these revisionist yet post-modern twist-type movies, Almodovar is experiencing a late career renaissance. What makes his latest film Parallel Mothers distinctive is that for the first time he is incorporating a political agenda by confronting the dark past legacy of dictator Francisco Franco, brilliantly intertwining it with current dilemmas.

While not a masterpiece, Parallel Mothers is an exceptional addition to the Almodovar canon. Unimaginably, instead of Parallel Mothers, Spain has submitted a lesser movie The Good Boss as its entry for the 2021 Best International Film Oscar.

Almost 40, Janis (Penelope Cruz) is an accomplished Madrid photographer, who has a fling with Arturo (Israel Elejalde), a forensic archaeologist. She asks him to excavate the unmarked grave of her great-grandfather, who was murdered in a town political roundup conducted by Franco nationalists at the start of the Spanish Civil War.

Janis becomes pregnant. However, Arturo is married and his wife is ill with cancer. Janis decides she will raise the child herself. She gives birth on the same day as another single mother, 17-year-old Ana (Milena Smit), her hospital roommate.

Ana is a reluctant mother as her pregnancy resulted from a gang rape. Her father threw her out of his house and she is living with her mother Teresa (Aitana Sanchex-Gijon), selfishly obsessed with her acting career, after given a plum role in a Federico Garcia Lorca play (Almodovarian irony as the gay poet was also killed by Franco fascists). Teresa opts to go on tour just when Ana needs her most. Janis and Ana become friends and promise to keep in touch after their deliveries.

They meet again by chance at a café near Janis's office where Ana works as a waitress. Janis asks Ana to be a live-in babysitter. A brief sexual relationship ensues, but the two women will develop deeper connections. To say more would spoil the delicious twists and turns of Almodovar's ingenious plot over a four-year period.

Moral dilemma
Janis is calculating and deceptive, especially after a comment made by Arturo inspires some sleuthing leading to a disconcerting fact about her baby that she keeps from Ana. This plot device provides emotional suspense, but also introduces the theme of honesty. Janis wants to find the historical truth about what occurred to her great grandfather, but she struggles with candor in her own messy personal life. 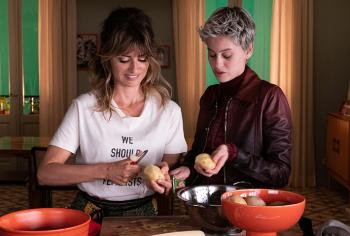 This repression of truth and unearthing secrets, both nationally and individually, as Janis hides evidence about her child, becomes the moral dilemma brilliantly connecting the political and the personal. After Franco died in 1975, Spanish citizens, so overjoyed with its new freedom, ignored the dictator's crimes. Only in the last two decades has the nation begun to reconcile that forgotten savagery of the 1930s.

Janis later lectures Ana concerning her reluctance about exposing the country's transgressions, only wanting to look at the future and not open old wounds, content to leave the past buried.

Aldomovar claims the legacy of brutal unjust crimes with its accompanying silence and shame must be faced. They mustn't be suppressed in the name of national unity or to avoid the discomfort of finding out unpalatable truths long denied or called lies, otherwise they will fester and corrupt later generations. This question of historical conscience should resonate with American audiences as our country deals with the veracity about our own racist history, especially as it's taught in schools.

Like Antonio Banderas achieved in Almodovar's Pain and Glory (2019), Cruz revels in a great role. She's incandescent, balancing Janis's buoyancy with her contradictory, even mean-spirited deceitfulness. She creates a captivating complex character displaying a wide-range of emotions, certainly worthy of an Oscar nomination.

Aldomovar is a true woman's director. When that term was applied in the Golden Age of Hollywood to George Cukor or Mitchell Leisen, it was often a derisive, code expression for homosexual. But Aldomovar truly understands women's passions, friendships, traumas, and what they must do to succeed and survive.

In Parallel Mothers, he's formulated a meditation on motherhood and the challenges of rearing children, but also women's fortitude and their desire to keep memory alive as well as to sustain families (biological and chosen) despite the costs and suffering it might entail.

Aldomovar's willingness to address grim misdeeds yet to do so with his characteristic upbeat tone, while not undercutting their shattering emotional power (especially the final riveting scene), displays an artist at the very peak of his creative genius.

Less the flamboyant provocateur and now the more elegant visually compelling stylist, with Parallel Mothers, Aldomovar can rightly claim his place at the forefront of great international filmmakers.