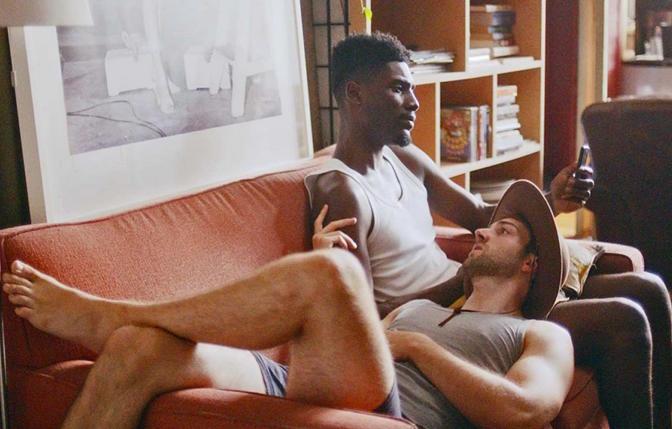 When a film opens with the tagline "Based on true events," even before the credits roll, it's an attention-grabbing move. Writer/co-director/actor Matt Fifer takes that step with his full-length feature debut Cicada (Strand/Beast of the East), with additional story by his co-star Sheldon D. Brown. If these are, in fact, "true events," then Cicada is deserving of the buzz it has received.

Set against the backdrop of the Jerry Sandusky molestation scandal from the early 2010s, Cicada manages to strike a balance between comedy, drama and borderline graphic sex for the length of its 90 or so minute runtime. It often brings to mind other intimate and personal gay flicks such as Andrew Haigh's Weekend and Hong Khao's Monsoon.

As hot (that body!) New York City-based millennial Ben (Fifer) puts it, he "paints apartments for DILFs," such as Bo (David Burtka). That is when he's not waking up nightly from a recurring childhood dream or being sexually promiscuous or dealing with long-running health issues.

Much to his surprise (and ours, considering the amount of sex he has within the first few minutes of the movie), he cruises and then falls for Sam (Brown), a somewhat closeted Black data tech guy from Bed Stuy. "Back on the dick," as his sister Amber (Jazmin Grace Grimaldi) observes, after having also dated women, Ben falls hard for Sam.

As we come to find out, most of Ben's scars are internal, while Sam, who survived being shot at close range by a guy he thought was trying to hook up with him, has an ostomy bag and a healed-over incision. Sam, whose father Francis (Michael Potts) is a pastor to whom he has not come out, also has some of his own emotional baggage to look after.

Regardless, it's a pleasure to watch the relationship develop. As with any new couple, they go through the process of getting to know each other better. They laugh, they fight, they fuck. You know what they say about make-up sex!

Throughout, Ben is also attempting to come to terms with the sexual abuse he experienced as a child. He's trying to figure out if his Long Island-based mother Debbie (Sandra Bauleo), who loves him unconditionally, will be capable of handling his long-repressed memories. Sessions with inappropriate therapist Sophie (Cobie Smulders), who drinks a beer while counseling him, lead Ben in a restorative direction.

However, there are more bumps along the way. These include Ben attempting to surprise Sam outside of his office with flowers, Sam taking Ben to his father's house for dinner, and Sam's PTSD rearing its head when a car backfires.

As debut films go, Fifer and co-director Kieran Mulcare have much to be proud of with Cicada. A welcome addition to the LGBTQ movie canon, Cicada is also a showcase for promising artists. Rating: B+