'Being the Ricardos' - Aaron loves Lucy 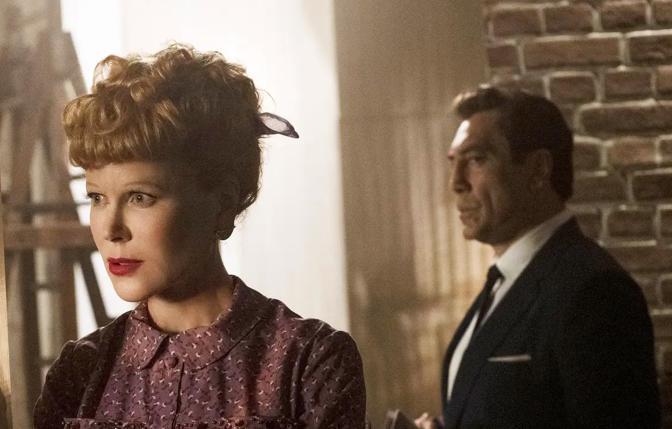 Nicole Kidman and Javier Bardem in 'Being the Ricardos'

From the moment Nicole Kidman first appears onscreen as Lucille Ball in Being the Ricardos (Amazon Studios), it's clear that writer/director Aaron Sorkin loves Lucy (although he must not have seen her in the movie version of Mame).

She's radiant as she rages against her philandering husband and creative partner Desi Arnaz (Oscar-winning Spanish actor Javier Bardem who also played Cuban, as well as gay, in Before Night Falls), before being interrupted by an even greater potential threat; tabloid gossip monger Walter Winchell's out-of-the-blue blind item, about a communist comedienne, on his radio show.

However, it's in the scenes before we see Lucy and Desi that we know we are firmly in the Sorkin zone. The chatty and rapid-fire patter that is Sorkin's trademark first lands in our ears via the older versions of I Love Lucy producer/writer Jess Oppenheimer (John Rubinstein), and writers Madelyn Pugh (Linda Lavin) and Bob Carroll, Jr. (Ronny Cox), relating their experiences of one of the scariest weeks in their careers. The tone is also set when Pugh says that Lucy and Desi were "either tearing each other's heads off or tearing each other's clothes off."

What follows is a dramatization of the tense days following Winchell's teaser, as well as a series of flashbacks to when Lucy and Desi met on the movie set of 1940's Too Many Girls.

Sorkin's knack for snappy repartee is put to good use throughout. The early I Love Lucy table read scene, for example, where the vitriolic volleys between actors Vivian Vance (Nina Arianda) and William Frawley (J.K. Simmons) are as hilarious as they are hurtful.

The interactions with the younger versions of writers Pugh (bi actor Alia Shawkat), Carroll (Jake Lacy) and Oppenheimer (Tony Hale) are almost as funny as the writers' room scenes from The Dick Van Dyke Show and 30 Rock. Additionally, the segments where we get a sense of the inner workings of Ball's creative process, as she imagines the scenes in the Ricardos' apartment, in black and white, of course, as they are being written or read aloud, are an especially nice touch.

Being the Ricardos attempts to cover a lot of ground and succeeds for the most part. In addition to addressing the insidious Red Scare and HUAC, the movie comments on prejudice, the stresses of a marriage in the public eye, as well as the competitiveness that existed between Ball and Vance, and Ball and Pugh, too. There is also a glimpse into the pressures exerted by a network (CBS) and a sponsor (Philip Morris) during the conservative 1950s (Ball's pregnancy is a good example).

Kidman (who makes good use of her husky register) rises to the occasion as Ball, as does Bardem in his portrayal of Arnaz. Equally deserving of praise are Arianda and Shawkat, who are excellent additions to the supporting cast. Rating: B-

Michael Urie: the 'Single' sensation on his new holigay film
Sign up!