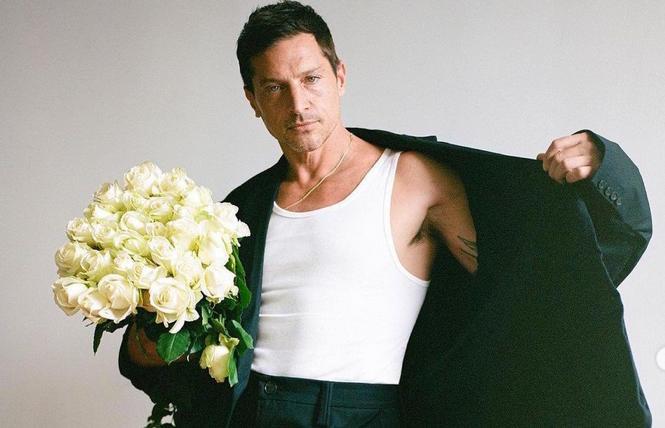 How would Simon Rex —thespian (several Scary Movies), rapper (as Dirt Nasty), comedian, former model and ex-MTV VJ— describe his character, Mikey, in Sean Baker's Red Rocket, a role for which he's just been nominated for Best Actor by the Chicago Film Critics Association and the Indie Spirits Awards? He settles for "a sociopathic, narcissistic, self-involved, unaware douchebag."

After the second, you can just sit back and admire Rex's perfect comic timing, his bonkers energy, and his no-holds-barred on-screen sexuality. He has more lines than Hamlet here, and he has to say them twice as fast, often with far less clothing.

He succeeds in gaining access to their couch by promising to pay rent. Rent? How? Who will hire a chap whose most recent job entries subsist of gangbangs and an occasional ménage a tròis? "I'm famous for fucking," he shares.

Thank the Lord for having low standards for employing drug dealers. Quickly, after making a connection, Mikey is raking in the greenbacks by selling patriotically-papered blunts while satisfying his spouse with the help of Viagra. All is going well until the day he walks into the local Donut Hole.

There he spots a lovely 17-year-old, ginger-haired, bargain-basement Lolita at the cash register. Is this love at first sight with a high-schooler, or just slimy opportunity knocking? And will our self-centered hero ever get his comeuppance in this at-times rollicking, subversive comedy, especially after causing his mother-in-law to scream, "You're drinking all of my Ensures"?

To find out more about Simon Rex, Red Rocket, his career comeback, and his hundreds of Vine offerings (remember Vine?), but not his bare-chested workout videos or extremely brief 'blue' period, I Zoomed with the star at the beginning of this month. Of course, we discussed his birthplace first. 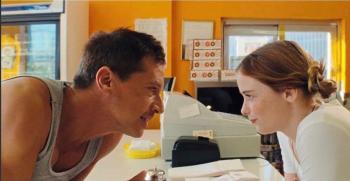 Simon Rex: Yeah, growing up [in San Francisco] was great. I grew up until I was eleven in the city, and then I moved to East Bay, and I lived in Alameda in the Berkeley area. So I lived in the Bay area until I was 17-18 years old. San Francisco, like New York, has the best and the worst of everything, which is great. You're just around so many different ethnicities. It's like a melting pot. You just learn a lot because you're not in just a one-note suburbia-kind of place, but with a lot of flavors.

Brandon Judell: How do you have such a big LGBTQ following? Even the author of Lesbianism Made Easy told me she was a fan.
I don't know. You know, that's a good question. My godfather, growing up, was gay. He was basically almost like a father figure to me. So I think I was surrounded, being from San Francisco and having my godfather who's the guy who got me my braces in the fifth grade, and took me to my graduation, and got me a suit, and he was actually Marc Jacob's lover, the clothing designer. So I grew up exposed and around that.

To me, it's just normal. I don't think I have any phobias that some people may have about the community for some lame reason. I'm just used to it. So I don't know. I'm not sure why. Maybe that's the reason. Does that make sense?

Well, I think it's a mixture of great looks and an engaging personality.
Well, I can't say that, so thank you.

The dozens of compilations of your Vine antics, now on YouTube, feature your fictional outrageously gay identical twin brother, Steve, who in one sketch wears 'I Love Dick' sunglasses and in another tells you to go buy a banana "so I can ram it up your cabana." Where did this all come from?
That's funny because I remember doing that and my mom saying, 'Honey! You should be careful. You might offend the community,' and it was the opposite. More people are coming up to me saying how much they loved it. Gay guys thought it was hilarious because the joke isn't somehow making fun of gay people.

The joke to me was that it was really funny having twin brothers, one's gay and one's straight, and the gay twin wants to fuck the straight one, so therefore he loves himself and he's just a narcissistic brother.

Brenda Deiss, Simon Rex and Bree Elrod in 'Red Rocket'  (Source:Courtesy of A24)

The character you created on Vine is not that distant from what you do with Mikey. Both seem like little boys encased in a hot man's body with a sixth grader's sense of self and humor. It's almost like an audition tape.
Well, that's the good thing about social media. It basically keeps your tool sharp if you are not working, and if you are just posting your own stuff and you are getting people to laugh. It just kind of keeps you moving and grooving.

Social media's been actually a good platform because Sean said he's followed my career since MTV, and he would watch my Vines, he would watch my Instagram videos, and my YouTube videos. So I was in the back of Sean's head for a long time so in a weird way, this did actually get me the job.

You're very free with your body. I interviewed Fred Ward a long time ago for the film Henry and June. It was about the author Henry Miller and sex life. Ward said the reason he didn't show his penis on screen was that a penis was distracting while a woman's parts weren't, which I thought was a bit prejudicial. I guess one of the reasons they hired you was that you are so free with your body. You're not uptight about sexuality at all?
Yeah, I think that America is very wound about nudity, about sex. They need to relax a little bit more. You go to Europe and other parts of the world, and people are a lot more comfortable with nudity and sex. We're just very immature about it. To me, it's like this film in a small way will help people maybe grow up a little bit. That's just how I feel. My parents are hippies. I'm from San Francisco; free love, running around. Maybe that's different from most people, but I don't really care.