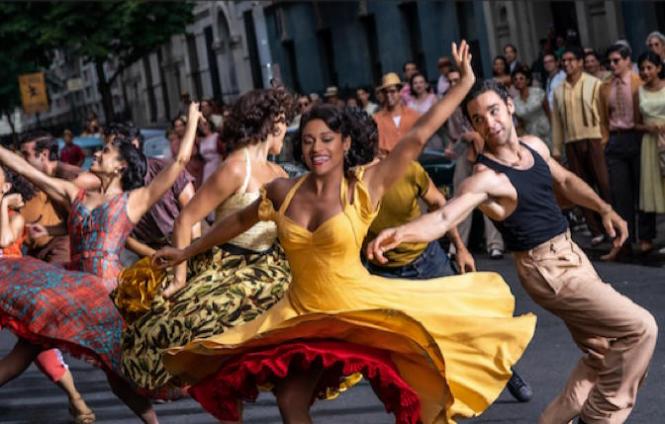 Ariana DeBose as Anita and David Alvarez as Bernardo in the "America" dance scene in Steven Spielberg's 'West Side Story.'
(Source:20th Century Studios)

2021 has been another disappointing year for movies with only small audiences returning to multiplexes to watch new films. So theater owners should get down on their knees and thank the gods for West Side Story.

It's always a daunting gamble to remake an acknowledged classic (i.e. 2018's Mary Poppins Returns as cautionary tale) especially decades after the original, but Steven Spielberg has defied the odds, reinventing and rejuvenating the 1961 ten-time Oscar winner. With some improvements in his dazzling reinterpretation, he's fully justified a remake. And if any movie should bring back in-person film-goers in droves, this might be it.

Spielberg's revival is based more on the 1957 Broadway musical than on the film, especially because certain songs are reordered according to the stage version, not the movie, changes that help to propel the plot.

However, the crucial alteration relates to the criticisms long levied against the movie having cast white actors in brown face in nearly every Puerto Rican role. Spielberg's version pays reverent homage to the masterwork, but is intent on making a contemporary movie reflecting contemporary values about race, ethnicity, and gender. All the actors playing the Sharks, male and female, are 100% Latin and young.

Screenwriter Tony Kushner (Angels in America) is also attuned to issues of poverty and gentrification, so the initial scene showcases the rapidly transitioning Upper West Side precincts in the summer of 1957, with decaying tenements being bulldozed to make way for the new upscale Lincoln Center.

This is a real street story with real street characters. Kushner provides a social context to explain the conflict between the gangs as a race war, particularly tragic since the urban renewal forces destroying both their neighborhoods should unite rather than separate them. 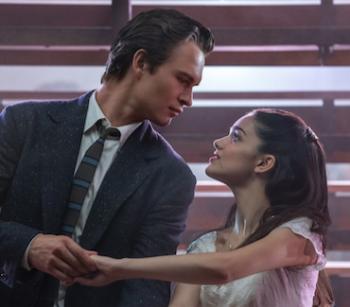 Hope and yearning
West Side Story is inspired by Shakespeare's Romeo and Juliet, with the two warring gangs, the Jets (whom police detective Lt. Shrank derides as "the last of the can't-make-it-Caucasians") headed by the wiry Riff (Mike Faist) and the Puerto Rican Sharks led by boxer Bernardo (David Alvarez). Riff's best friend Tony (Ansel Elgort) has just returned home after serving a year in prison for nearly killing a rival.

At a dance party, he meets Maria (Rachel Zegler), Bernardo's sister, and roommate/close friend to Anita (Ariana DeBose), girlfriend of Bernardo. They almost immediately fall in love, a union opposed by both gangs that will end in catastrophe.

In a departure from the original, a new character, Valentina, the Puerto Rican widow of Doc, the compassionate white pharmacy owner who gave shelter and advice to Tony, provides the same nurturing function here. In a lovely reclamation, Valentina is played by 90-year-old Rita Moreno, the 1961 Anita (for which she won an Oscar) and now also an executive producer.

In another twist, Valentina sings the musical's most famous song, "Somewhere," originally a love duet between Tony and Maria, but now a rueful song of hope and yearning for a better world, as a survivor of an interracial marriage, which barely manages to avoid sentimentality (often a Spielbergian foible). Casting Moreno could've been gimmicky, yet creates a believable bridge between the two films as well as a tenderness to counterbalance the violence.

Outsiders
The prior West Side Story was created by four gay geniuses: director/choreographer Jerome Robbins, composer Leonard Bernstein, lyricist Stephen Sondheim (who just died), and playwright/librettist Arthur Laurents. Their sense of being society's (sexual) outsiders was easily transferred to the gangs in the plot.

But through the passing decades criticism emerged concerning four white men writing about people of color. This charge still holds with the 2021 version, as Spielberg, Kushner, and choreographer Justin Peck, are all Caucasians. Only Kushner is gay, and that sensibility is reflected in the wannabe Jet character, Anybodys, initially dismissed as a freakish tomboy, but written as a non-binary, gender nonconformist who rejects being called a girl.

Kushner's screenplay is a vast improvement over the creaky Ernest Lehman script which just seemed to connect one song to the next, but here provides motives for why the characters do what they do. However, there's one major flaw —similar to the 1961 film— where audiences are asked to accept that Maria must forgive another character almost instantly for a dastardly act, which won't be spoiled here, yet it strains credulity, threatening to undermine the film. This narrative segment should've been fixed. 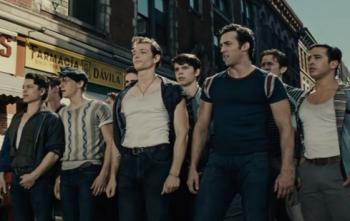 Fizzling romance, dynamic dances
It's refreshing to hear singing actors in the roles of Maria and Tony. Ghost singers replaced the voices of the first stars Natalie Wood and Richard Beymer. Zegler and Elgort are fine singers, less so as actors. Their romance, which, we're supposed to assume, is love at first sight, never sizzles and as the film progresses, fizzles emotionally. Newcomer Zegler projects the necessary starry-eyed innocence but little else, while uninspiring Elgort is passable but can't convey Tony's pathos, though he possesses handsome movie star looks.

Faist is exceedingly good suggesting a world-weary hotheadedness encased within an appealing empathic sweetness. Alvarez is quite adept bringing the necessary brawniness, although his role doesn't have as much depth. He's probably the best dancer of the major cast.

The film is visually resplendent with luminous, breathtaking lighting and colors, not to mention gorgeous costumes. The choreography is expressive, hypnotic, and athletic. "America" is astonishing as it nods to Robbins, but provides its own dynamism in the form of a reckless tribal exhilaration, especially in the gang sequences that embody the frenetic energy of New York City.

The songs remain memorable. The movie is far from perfect, yet the plusses far exceed the minuses. Its warning that racism, xenophobia, and poverty threaten society's cohesiveness sadly seems as timely today as sixty years ago, as does its remedy that love transcends prejudice, division, and intolerance.

'West Side Story' on film turns 50

Best Side Story: an interview with Rita Moreno
Sign up!