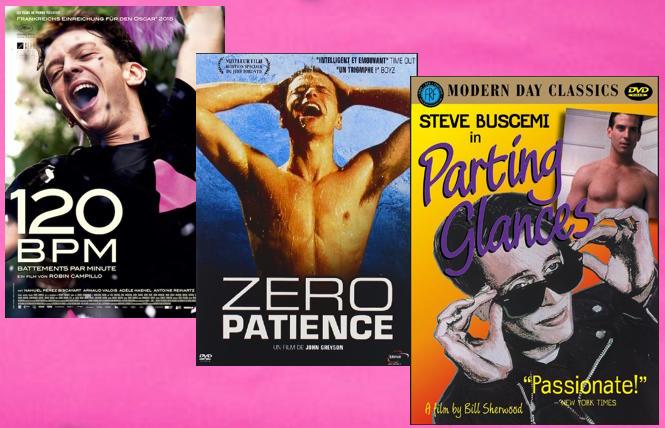 While one could point to different functions of AIDS films (i.e. educative), one could also say collectively they combatted the idea of AIDS as a disease of the "other" whether that other was an intravenous drug user, a hemophiliac, a Haitian, or had a "deviant" sexual orientation.

In the public mind there were guilty villains (i.e. promiscuous gay men) or innocent victims like Ryan White or Elizabeth Glaser more worthy of public sympathy. AIDS movies insisted that all those afflicted with HIV —regardless of how they contracted the disease— deserved compassion as all were attempting to cope courageously with the terrifying emotions associated with a probable terminal illness.
Films humanized PWAs and universalized their experiences by raising awareness of how they lived, what they thought and felt, and how others could respond to their needs, as they tried to make sense and cope with an unending horror.

AIDS films declared that people with AIDS are not the other, they are us; their suffering should be our suffering. They ultimately challenged deleterious understandings of the disease so audiences no longer could or would want to keep the disease at arm's length.

To paraphrase a monologue from Arthur Miller's Death of a Salesman: "They're human beings and a terrible thing is happening to them. Attention must be paid."

Certain films dealt with difficult even taboo issues raised by the pandemic. It's My Party (1996) chronicles a two-day farewell party with invited friends, hosted by Nick (Eric Roberts), a gay architect, dying of an opportunistic infection that will destroy his brain within weeks. He decides at the party's end he will commit suicide by taking barbiturates. A friend has invited Nick's former lover Brandon (Gregory Harrison), who abandoned him when he tested HIV-positive, believing he still cares and a reconciliation might be possible.

A family feeling pervades, with death portrayed as affirming life, made bearable through the love we share with each other. Sad and subdued, avoiding melodrama, It's My Party confronts the thorny suicide issue, which became more common as the pandemic progressed and medical treatments became less tenable. However, it was rarely discussed publicly, but Party bravely depicted it as a viable acceptable choice to deal with the often merciless painful drawn-out death that was AIDS.

Another forbidden subject was assisted suicide in the era before Dr. Jack Kevorkian brought prominence to the subject. The French film BPM: Beats Per Minute (2017) centers on the AIDS activism of ACT UP Paris in 1990s France, beginning with the politics involved but shifting to individual stories of members, especially with rapidly deteriorating Jeremie and newcomer Nathan, HIV-negative, falling in love with increasingly ill veteran Sean, HIV-positive.

Engrossing, we watch the hectic and desperate group dynamics from the inside as strategies and conflicting goals are debated and watch how it affected members personally, often in a climate of despair so that euthanasia became a feasible alternative.

As mentioned in last week's article, many films unwittingly were trapped in society's blame game with the inference that gay men were responsible for incurring the disease because of their promiscuous sexual behaviors which recklessly transmitted the HIV virus. Zero Patience (1993) is an audacious Canadian musical, easily the most innovative AIDS film ever created It refutes the Patient Zero theory (long since discredited) advocated by Randy Shilts in his book And the Band Played On, that flight attendant Gaetan Dugas was the first gay man to spread AIDS to North America.

The bizarre plot, which has the 19th-century gay Victorian explorer/adventurer Sir Richard Burton, at age 170, as a central character, defies description, as do some of the raucous songs like "Pop-A-Boner" and "Butthole Duet." This sassy scatological satire, uproariously funny, attacks moralism and those who put blame on anyone for the spread of a virus no one even knew about. Non-sentimental, inventive, fantastical, and thought-provoking, like a gay Monty Python farce, Zero must be seen to be believed.

Most AIDS films focused on gay casualties, but a few gave perspectives from the other categories of AIDS sufferers. Dallas Buyer's Club (2013) is the story of Ron Woodruff (Matthew McConaughey), a straight cowboy who had sex with an intravenous drug-using prostitute and consequently was diagnosed with AIDS in the mid-1980s. Refusing to accept his death sentence of thirty days, he eventually connected with a Mexican doctor who suggested alternative drugs to treat the disease not approved for use in the U.S.

The initially homophobic (but later compassionate) Woodruff began selling these drugs to other PWAs, assisted by Rayon (Jared Leto), a transgender woman with HIV. The film was nominated for six Oscars with McConaughey (superb despite giving one of the worst acceptance speeches in Academy history) and Leto winning for their intense performances. Leto was criticized for playing transgender and if the film were made today, a trans actor would likely act the role.

But the film conveys well the stigma of being a PWA, their desperation to try any treatment regardless of the risks, and their rage at the medical-industrial complex. Dallas celebrates a faulty unsung hero who went to court to fight for his life and indirectly helped change FDA policy on access to experimental drugs for all life-threatening diseases. As sub-plots Tongues Untied (1989) dealt with African-American PWAs and Boys On the Side (1995) featured a straight woman (perennial straight ally Mary Louise Parker) who contracted the virus from a heterosexual male bartender.

Faced with a death sentence, how did PWAs and queer people in general cope with the sense of doom that characterized that first AIDS era (1981-1996)? Two unlikely comedies coming from vastly different vantage points gave similar answers. Jeffrey (1995) written by gay writer Paul Rudnick and based on his stage play, presents waiter/actor Jeffrey (Steven Weber), who has sworn off sex because of his fear of catching AIDS. He meets the charming, hunky HIV-positive Steve (Michael T. Weiss) at his gym. He must decide whether to pursue a relationship with someone likely to die.

The Living End (1992) written/directed by Gregg Araki and considered the epitome of '90s new queer cinema, portrays two wounded gay men, one a drifter/criminal, the other a jaded film critic, both HIV-positive, who fall in love and embark on a no-holds-barred road trip that includes murder and theft with the motto, "Fuck everything."

Liberated to do whatever they want as they expect to die soon anyway, the film is jam-packed with black humor (i.e. Choose Death bumper sticker). It resembles a furious gay punk Thelma and Louise, giving full vent to the outrage and alienation experienced by gay men at that time.

The film, while not for all tastes, is willing to offend everyone, even featuring a pair of killer lesbians (a shibboleth after the bruising Basic Instinct controversy). Many critics found the film pretentious, but it counterbalances the weepiness of many AIDS films and attacks any passive waiting-to-die responses to the epidemic. And like Jeffrey, it suggested that humor and love will get us through these dark times.

Theo and Hugo exit together and start getting to know each other when Hugo reveals he is HIV-positive and may have infected Theo. They try to find a hospital so that Theo can take prophylactic medicine to prevent him from seroconverting. Nail-bitingly thrilling as their time to act is limited, Paris conveys genuine intimacy between the two leads, showing that despite protease inhibitors, the terror of AIDS (still no cure or vaccine) today remains real and can't be wished away.

Finally, there is one film that manages to avoid all the pitfalls of blame, squeamishness about sexuality, AIDS as a gay disease, and perpetuating stigmas associated with being gay. Parting Glances (1986), concerns a gay couple, Michael (Richard Ganoung) and Robert (John Bolger), with the latter being transferred to Africa by his (closeted) employer. They have 24 hours left to process their union and decide whether to stay together before he leaves. Friends gather at a party to say farewell. Michael's ex-boyfriend, Nick (Steve Buscemi, in a star-making performance), whom he still loves, has AIDS but doesn't let the disease define him.

The party scene has never been equaled with flippant, witty but realistic dialogue, epitomizing New York gay urbanites in the 1980s, poking fun at every queer stereotype imaginable.

Writer/director Bill Sherwood was the gay Preston Sturges, a brilliant talent felled by AIDS in 1990 alongside Arthur Bressan; an incalculable loss for LGBTQ filmography. Revolutionary in its understatement, the Michael/Robert coupling may be the most honest believable gay relationship ever committed to film.

AIDS may not be the sole focus, but it pervades every frame and is never maudlin, just presented as a matter-of-fact scenario, a terrible reality that had to be faced, but it didn't have to defeat the queer community.

The film recognizes that AIDS will permanently alter the LGBTQ community in ways that now seem prophetic. With the exception of cable TV's Angels in America, Parting Glances (available on YouTube) is the greatest narrative AIDS film.