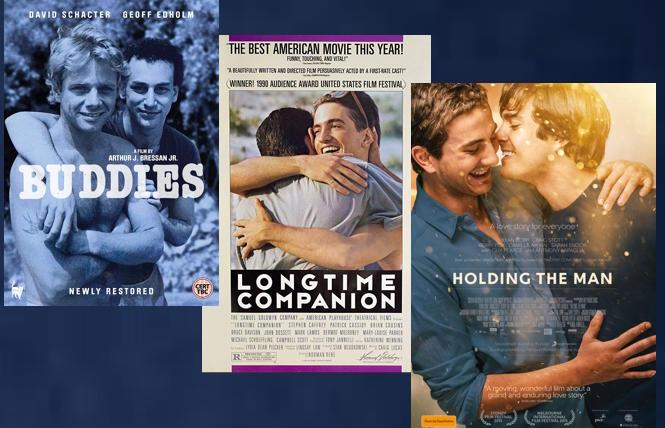 This year is the 40th anniversary of the start of the AIDS pandemic. It is worth reflecting on how cinema has portrayed the disease and those afflicted with it. It is quite extraordinary that it took Hollywood almost thirteen years before it made its first movie to recognize AIDS, Philadelphia (1993).

For many, it was too little too late. Jonathan Demme's film was primarily a less threatening courtroom drama concerning lawyer Andrew (splendidly played by Tom Hanks in an Oscar-winning performance) fired from his firm on fabricated charges because they found out he had AIDS and sues for punitive damages. What LGBTQ viewers found unbelievable was that Andrew's attorney (Denzel Washington) was homophobic. There were plenty of queer-affirming lawyers in 1993 who could have represented Andrew. 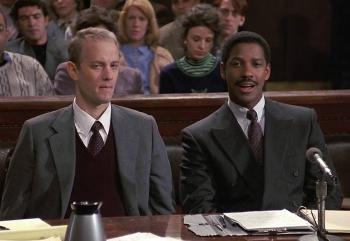 Recently, a 20-something friend mentioned that he had streamed the movie and thought Miguel (a wasted Antonio Banderas) was Andrew's roommate, when in fact he was his lover, an easy mistake since there was virtually no sign of affection between them.

The film projected an overly sanitized portrait of gay men, showing no sex or sexualized language. At the time the film was considered groundbreaking and undoubtedly it did raise awareness and tolerance among some straight viewers. But like a significant number of other films, homosexuality and disease were conflated, urging us to care about homosexuals because they were dying, a cliché by 1993.

Philadelphia seemed like a PSA announcement to appeal to and not offend in the slightest the broadest audience imaginable. Andrew's family seemed to step out of a Norman Rockwell painting, completely supportive of him. Ultimately the film was rife with outdated stereotypes, lacking honesty and originality. Most of Philadelphia's themes and messages had already been broadcast in far superior indie movies.

Looking back at these films, by 2021 standards they are problematic in that they often dealt only with white upper-middle-class men with AIDS, and strongly suggested AIDS was a disease affecting only gay men. 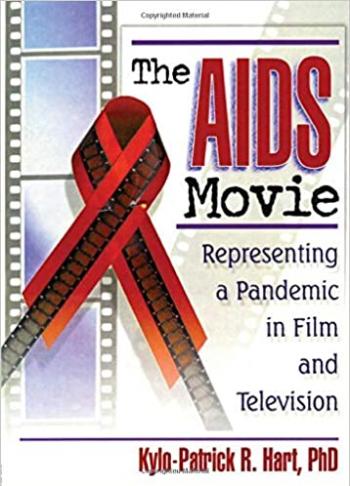 In his essential book, The AIDS Movie: Representing a Pandemic in Film and Television, Professor Kylo-Patrick Hart, critiques their innocent victims/guilty villains typology, depicting PWAs as the menacing threat, the representation of us versus them (victim blaming but also gay PWAs as sacrificial others).

Despite these shortfalls, there were some films that managed to mitigate these land mines and reveal what life was like for PWAs and queer people in general when AIDS was invariably fatal, forcing audiences to deal with the two major denials of our culture, death and homosexuality.

There are numerous excellent films that mentioned AIDS as subplot, such as The Hours, Love Valour Compassion, Rent, Art School Confidential, Bohemian Rhapsody, and Philomena. to name a few. However, in this article we will just include movies where AIDS was the central primary concern.

Buddies (1985) was the first and still one of the bests films to deal with AIDS, even preceding TV's An Early Frost. Written and directed by gay filmmaker Arthur Bressan, this arthouse picture just played a handful of theaters in New York, Los Angeles, and San Francisco for a few weeks, including the Castro Theatre, and then disappeared until its 2K restoration screened there again at Frameline 41 in 2018. 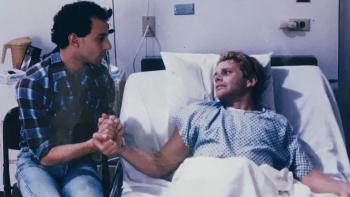 Gay 25-year-old David (David Schachter) volunteers as a buddy to visit 32-year-old politically active Robert (Geoff Edholm), who is dying alone of AIDS in a hospital bed, abandoned by family and friends. They draw closer as they share personal memories.

Though very low-budget, the film is still powerful and touching in its simplicity as it conveys the fear and uncertainty surrounding the disease at that time, such that David initially wears protective gear resembling an astronaut's space suit when he first meets Robert.

One of the standard plots in AIDS film was the PWA returning to his family to reveal not only that he had the disease but was also gay. The first television movie on AIDS, An Early Frost (1985), was devoted to this theme, but a recent 2018 film, 1985, a minor masterpiece, reimagines that scenario with Adrian returning to his religious parents in Fort Worth, Texas at Christmas to deliver the double whammy news, but can't bring himself to do it. 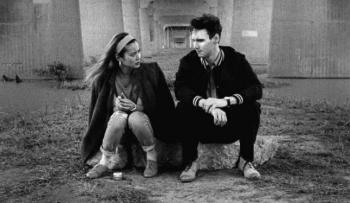 As opposed to An Early Frost, where the main character, a successful lawyer tells his family the truth and they respond with anger and bewilderment, Adrian (a bravura performance by Corey Michael Smith) by withholding, underlines the disease's devastating impact in terms of fear, bigotry, and denial, especially upsetting since his younger brother is likely gay.

When his mother (the magnificent Virginia Madsen) towards the end of the film takes him to the airport and says, "You don't have to tell me until you're ready, but I'll try to be ready when you are," and Adrian still can't confide in her, the moment is heartbreakingly sad as the audience intuits this is probably his farewell, since his lover is already dying.

The film reveals the pain of not being truly known by those you love, even as you face death, making us realize the unfathomable courage it took desperate PWAs, having no other options, to disclose their hidden lives to their families.

Longtime Companion (1989) was probably the most anticipated gay movie ever released. An independently made film distributed by MGM, it became the first AIDS-themed wide-release picture to play in mainstream theaters, so for most LGBTQ Americans it would be their first opportunity to see on screen how the disease had affected their lives.

The film chronicled the early years of AIDS year by year as it impacted a group of gay men who were friends with each other and one straight woman who becomes a supporter/caregiver to them. So the audience experiences the character's frustrations and difficulties, having to make critical decisions based on the limited knowledge available to them in that time period. Flawed, in that Longtime focuses only on upper middle class white men in NYC and resorts to using melodramatic techniques resulting in a bonafide tearjerker. 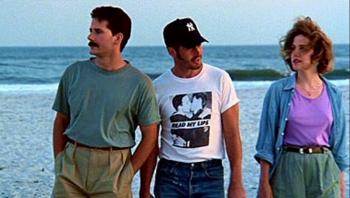 Also the film unwittingly adopts an And Then There Were None suspense as we wonder who the grim reaper will claim next. Yet the scene where Bruce Davison (in an Oscar-nominated performance) helps his dying partner in constant pain "to just let go" will break your heart.

The ending imagining what life will be like once an AIDS cure is found, gave hope that the nightmare would someday end. The film became the cinematic equivalent of the AIDS Memorial Quilt as a vehicle of grief to mourn these catastrophic losses, showing that friendship and loyalty coupled with heartfelt compassion without resorting to self-pity, helped people cope with this unbearable tragedy.

This theme of relationships affected by AIDS is explored in Holding the Man (2015), an Australian drama about two students Timothy Conigrave and John, who meet at a Catholic prep school in 1976 Melbourne and fall in love. They attend university and become involved in the Gay Rights Activism club, swept into the freefall that was gay liberation in the late 1970s, each sleeping with other guys. They separate and reunited years later, they both test HIV-positive. 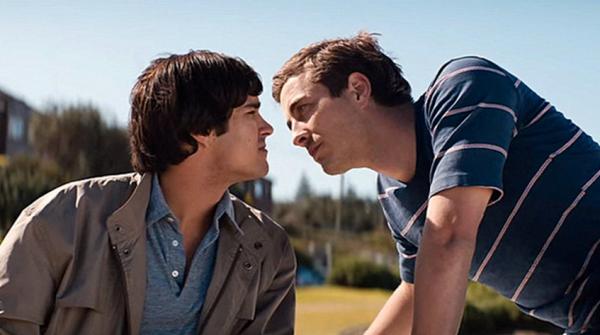 Timothy cares for a dying John despite opposition from John's family. Timothy will later finish his memoir about their relationship just ten days before his own death from AIDS. The book was described in a Daily Telegraph review as "a Romeo and Juliet for the AIDS era." The film shows the connection on how the '70s sexual revolution inadvertently became the breeding ground for an epidemic, but showcases the incredible bravery and perseverance gay couples had to face when both were infected with AIDS, refusing to let imminent death tear them apart.

More of the best AIDS films in part 2, next week.