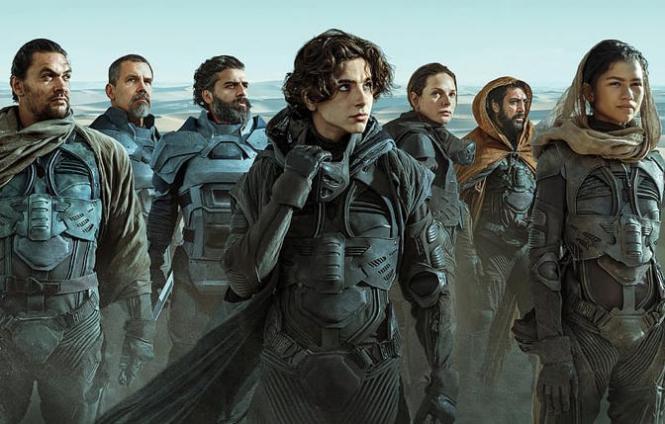 The cast of the new 'Dune' film adaptation

Attending the morning screening of Dune at the New York Film Festival, I was hoping for an LGBTQ romantic comedy about the Pines on Fire Island. What I got was Star Bores.

Clearly, there is nothing overtly queer about this adaptation of Frank Herbert's classic 1965 sci-fi novel. Even a barechested Timothy Chalamet in bed sets off no sparks. As Paul Atreides, he portrays the son of Duke Leto (Oscar Isaac) of House Atreides, ruler of the ocean planet Caladan, who's assigned by the Emperor Shadda to serve as fief ruler of the planet Arrakis." It's times like these when you really appreciate Wikipedia.

So why is everyone's excited about controlling the planet of Arrakis and subjugating its native inhabitants? Well, it's home to a valuable "spice" that endows its users with "a longer life span, greater vitality, and heightened awareness," plus you need to ingest it for interstellar space travel.

Paul's dad immediately orders his ready-for-battle troops to land in Arrakis the following day. Paul, meanwhile, is dreaming nightly of an attractive young woman (Zendaya) with an air hose up one nostril who lives on the spice planet. Against his father's wishes, he joins up on the expedition. However, before that he has to put his hand into the box of pain, and if I try to relate any more plot, I'll die from brain freeze.

Clearly, I have not read any of the Dune books, which might make some difference in my ability to embrace this enterprise. Proof: As I was going down an escalator with a cherubic woman of a certain age, height, and weight, I asked her what she thought of the film. She, having read everything Herbert had ever written, was in an orgasmic trance, avowing this film was everything a Dune adaptation could and should be.

I, however, am a member of the ilk who believes a film should not force you to turn on your Kindle for comprehension. Prime examples of features that succeeded on their own merits: The Life of Pi, The Lord of the Rings, Bastard Out of Carolina, and arguably the Harry Potters, but who hasn't read them?

Now, you might counter you've checked out Dune's RottenTomatoes rating and saw a 90% positive response. Please note: if a film is only half bad, there are no half-bad tomatoes on that site for critics to choose. Accordingly, these scribes will be charitable and avoid the giving of a rotten tomato. I know. I've been one of them in the past.

Indeed, maybe I'm wrong about Dune's dreary screenplay with its undeveloped characterizations and tedious wordings; the mixed acting chops; the poorly choreographed battle scenes that make you make you appreciate Game of Thrones all the more; plus the uninspired direction, and who knows, you just might have a good time.

Time writer Stephanie Zacharek swore she did, even though she wrote in her final paragraph: "Dune is sluggish in places —my eyes glazed over during one or two or maybe three of the battle scenes— but Villeneuve's conviction counts for a lot." Can someone explain that to me?

IndieWire's always astute David Ehlich, while applauding Chalamet's performance and some of the visuals within "these interminable 155 minutes," notes, "It's hard to overstate how little actually happens in this Dune, which flows like an overture that's stretched for the duration of an entire opera." 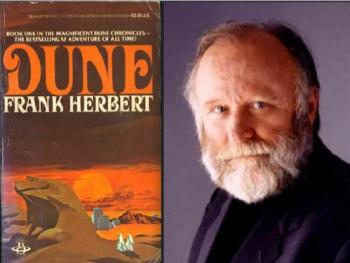 Herbert's 'dislike' of his gay son
Judgments aside, I was wondering whether there were any LGBTQ moments in the original texts or ones that I overlooked in the film. Googling "Dune homosexuality" supplied me with the following:

In the film, the villainous Baron Vladimir Harkonnen (Stellan Skarsgård) is dastardly. Think a hefty Rudy Giuliani. But in the text, Travis Johnson of Flicks.com recalls that the Baron "is a predatory homosexual given to pederasty and incest, an unrepentant rapist and murderer. Prior adaptations have leaned into his sexuality to differing degrees, with [David] Lynch's [1984 take] in particular embracing the archetype of the depraved gay sadist."

On Reddit, u/trickp7 in a post titled "Struggling with anti-gay themes," recalled numerous homophobic passages within the Dune series, including: "The homosexual, latent or otherwise, who maintains that condition for reasons which could be purely psychological, tends to indulge in pain-causing behavior — seeking it for himself and inflicting it upon others."

Now as I researched on, utilizing both trustworthy and possibly reliable sources, it appears Frank Herbert had a gay-activist son, Bruce Calvin Herbert, who died from AIDS-related pneumonia.

In a related Reddit post, maximdhiver, who labels himself a historian, quotes from Dreamer of the Dune: The Biography of Frank Herbert, written by another son, Brian. The following occurred when Herbert's wife was on her deathbed: "Bruce had wanted to come ... but Dad was delaying in giving him a time that would be convenient. My brother wondered, but did not say so to Dad, if this had anything to do with his homosexuality, which our father had never accepted."

A few posts later, mwisconsin shares: 'I met Bruce in 1989, while I was working for my father-in-law's TV station in Cedar Rapids, Iowa. I didn't know who he was. It was a month in when, in casual conversation, he revealed to me who is father was. . . . I can tell you that Bruce told me he didn't speak with his father because his father didn't like that he was gay."

Roberta Johnson in her review of the biography for Booklist cites that when his sons misbehaved, Frank hooked the lads up to a lie detector machine and that "Bruce struggled with drugs and homosexuality." The bio, according to a Booklist review, also recounts in detail Frank's "obsessive dental hygiene habits."

Then last year, when the Los Angeles Review of Books published Jordan S. Carroll's "Race Consciousness: Fascism and Frank Herbert's Dune," an article detailing how the alt-right is trying to co-opt the book series, the paper's readers went on a rant. Bob Arctor wrote in: "Herbert was a dick about his son being gay."

Someone writing in as "Nicol" added: "Why do you Dune cultists always minimize this man's horrific relationship to his son due to his son's gayness, something he hated so much he would be having his characters rant about homosexuality being linked to sadistic violence in his books? Oh wait its because you like reading the homophobic rants isn't it. . . . As if [Frank] Herbert wouldn't have thrown his whole weight behind Trump for the sake to teach these wimpy lib commies and the 'gay agenda' a lesson" (sic). Bravo, Nicol!

Happily, in part one of the Dune saga that's now being released, no homophobia is apparent, but then I went to pee twice so I might have missed it.

Cinematic visionlost in the dunes 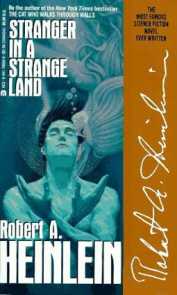 How queer is science fiction?