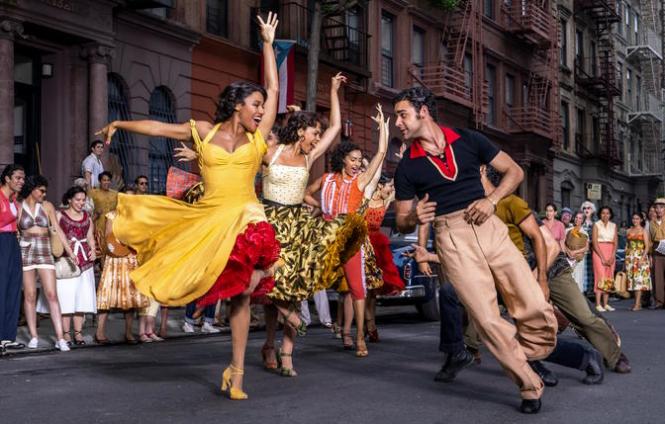 In early June, when California lifted many COVID restrictions, things began to look up for movie theaters, which reopened after being shuttered for 16 months. People gradually returned to multiplexes and with movies like F9 and A Quiet Place Part II, box office was starting to rebound, though a long way from reaching pre-pandemic levels.

Then the Delta variant struck and with breakthrough infections occurring among the vaccinated, a reemergence of pre-pandemic freedoms was put on hold with indoor mask mandates reinstated. What impact such curtailments will have on the film-going public remains to be seen.

However, studios this fall are releasing movies that were supposed to open last year in the hope audiences will be tempted to see these anticipated features in-person despite any health risks. Will people be willing to sit for two hours wearing masks? Will it be financially worthwhile for theaters to show movies when social distancing limits seating? 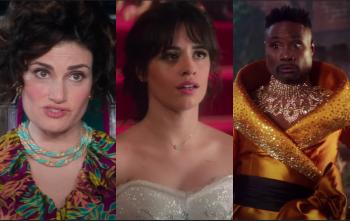 AMC is reopening, having upgraded their air filters and will operate at 40% capacity, will disinfect theaters in-between show times, and will ensure a six-foot distance between groups.

However, allowing viewers to remove masks while eating and drinking increases the possibility of viral transmission. Also, not knowing what surfaces people have touched, or their travel history, brings up many uncontrollable variables, not to mention the chance of sitting near un-vaccinated attendees.

Will audiences —now used to streaming pictures at home— decide it isn't worth the cost and possible exposure to watch on the big screen, especially since the time between a film playing in a theater and then sent to a streaming platform or put on Blu-ray/DVD has been considerably shortened?

The latter especially impacts LGBTQ-related movies, which are mostly independent or foreign, and if they play in theaters at all, do so for a very limited period. Some studios are co-releasing films simultaneously in theaters and on streaming services, raising the question of how such a policy affects box office revenue. Theaters are in precarious positions and the next few months will probably determine whether streaming will now become the permanent dominant viable option for watching movies.

Worth (Sept. 3/Netflix): Michael Keaton plays lawyer Kenneth Feinberg in this biopic, as he struggles with bureaucracy and politics to provide financial compensation for the victims/families of 9/11, with help from Amy Ryan and Stanley Tucci, just in time for the 20th anniversary of this colossal tragedy. 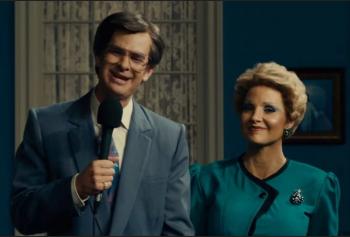 Andrew Garfield and Jessica Chastain in 'Eyes of Tammy Faye'

Blood Brothers (Sept. 9/Netflix): Documentary on the friendship between Muhammad Ali and Malcolm X including their eventual falling out, fictionalized in last year's One Night in Miami.

Language Lessons (Sept. 10): Mark Duplais wrote and stars as gay Adam, who after a life crisis begins taking Spanish lessons online, from a straight Costa Rican woman and they bond. It played at Frameline this year.

Everybody's Talking About Jamie (Sept. 17/Amazon Prime): The adventures of an aspiring adolescent drag queen (Mark Harwood), tutored by Richard E. Grant (Can You Ever Forgive Me?) as a veteran drag performer. This film played at Frameline in June.

Dear Evan Hansen (Sept. 24): The hit Broadway musical, which made a star of Tony Award-winning Ben Platt, reprising the title character high school student suffering from social anxiety, who begins self-discovery and healing following a classmate's suicide. The trailer has suggested to some that Platt at 27 is too old for the role. Julianne Moore plays Platt's mother, while Amy Adams acts the classmate's mother.

The Most Beautiful Boy in the World (Sept. 24): A Swedish documentary on actor Bjorn Andresen, a 15-year-old teenager discovered by gay director Luchino Visconti in 1971 to play the gorgeous adolescent Tadzio in the now classic gay film Death in Venice. The movie made him an international star but largely had a negative impact on his career, as the now straight 66-year-old Andresen relives memories about that experience, attempting to get his life back on track.

October
The Addams Family 2 (Oct. 1): The sequel to 2019's animated The Addams Family, with Oscar Isaac as Gomez, Charlize Theron as Morticia, and Bette Midler as Grandmama, based on the campy 1960s television comedy.

Many Saints of Newark (Oct. 1/HBO Max): The film prequel to the landmark HBO series The Sopranos with the late James Gandolfini's son Michael playing the young Tony Soprano revealing how he became the mobster later played by his father. 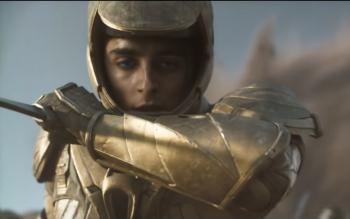 Diana: The Musical (Oct. 1/Netflix): This is a live recording of the 2019 stage musical on the life of the late Princess of Wales, mother of Princes William and Harry, two months ahead of its Broadway debut.

Halloween Kills (Oct. 15): A sequel to the rebooted 2018 Halloween, which followed directly from the 1978 John Carpenter horror classic, with Jamie Lee Curtis repeating her role as Laurie Strode leading a vigilante mob against the impossible to kill monster Michael Myers.

Last Duel (Oct. 15): A historical drama in 14th-century France, directed by Ridley Scott, about a woman raped by her husband's best friend, who is challenged by him to the last legally sanctioned duel in French history, with an all-star cast: Matt Damon, Ben Affleck, Adam Driver, and Jodie Comer.

The Velvet Underground (Oct.15/Theaters/Apple TV +): This is a documentary history of the revered 1960s/1970s rock band who with their avant-garde, underground, alternative music laid the groundwork for the later development of punk rock and new wave music. It features in-depth interviews with key players and never-before-seen performances. Their original manager was Andy Warhol, who convinced his protege German-born Nico to sing on their debut album, which made stars of Lou Reed, John Cale, and Sterling Morrison. The film is directed by gay auteur Todd Haynes, who made the 1998 gay fictionalized musical drama Velvet Goldmine, partially influenced by the band, especially Lou Reed.

French Dispatch (Oct. 22): The travails in an outpost of an American newspaper set in a fictionalized 20th-century French city that brings to life a collection of stories printed in "The French Dispatch," showcasing an all-star cast including Bill Murray, Tilda Swinton, Timothee Chalamet, Saoirse Ronan, and Francis McDormand, directed by Wes Anderson. 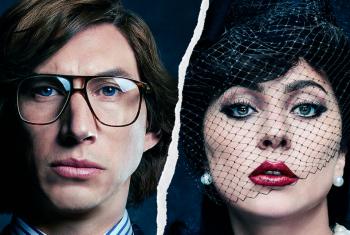 Adam Driver and Lady Gaga in 'House of Gucci'

Belfast (Nov. 12): A semi-autobiographical film, written and directed by Kenneth Branagh, about a working-class family during the tumult of the late 1960s in the Northern Ireland capitol, including Dame Judi Dench as Granny.

House of Gucci (Nov. 24/Paramount+): The turbulent marriage and divorce of the famed fashion designer (Adam Driver) and his ex-wife Patrizia (Lady Gaga), who later helped engineer his assassination. Directed by Ridley Scott with appearances by Al Pacino and Jeremy Irons.

Soggy Bottom (Nov. 26): If nothing but for the title, this drama, written and directed by Paul Thomas Anderson, follows a high school student becoming an actor in the 1970s, starring Bradley Cooper.

December
Benedetta (Dec. 3): A French/Dutch biographical drama, co-written and directed by Paul Verhoeven, concerning a novice nun in a 17th Italian convent who has a lesbian love affair with another nun.

West Side Story (Dec. 10): Probably the most anticipated film of the year, a musical remake of the 1961 classic of two teenagers from rival street gangs falling in love in 1950's New York City. A modern interpretation loosely based on Shakespeare's Romeo and Juliet, is directed by Steven Spielberg. The story reportedly is more similar to the 1957 stage musical than the 1961 film. Rita Moreno, who won an Oscar as Anita, has a small role as Valentina and is also an executive producer. 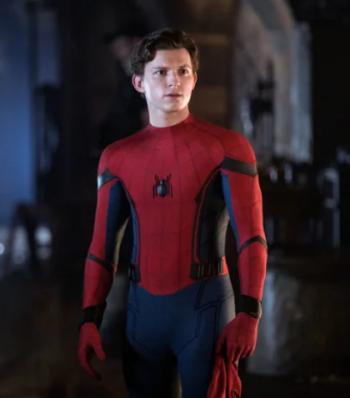 The Matrix 4: Resurrections (Dec. 22/HBO Max): The fourth installment, directed by Lana Wachowski, in the sci-fi action thriller with Keanu Reeves replicating his Neo role. The plot is unknown, but gay actors Neil Patrick Harris and Jonathan Groff are part of the cast.

Cyrano (Dec. 24): American-British musical drama, directed by Joe Wright (Atonement), based on the 2018 stage musical, itself indebted to the 1897 Edmond Rostand French play Cyrano de Bergerac, starring Peter Dinklage (Game of Thrones), under the guise of another man, trying to woo Haley Bennett as Roxanne, his secret love interest.