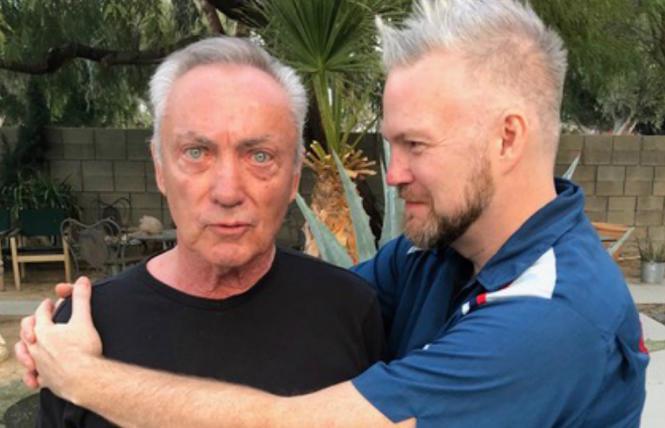 Udo Kier and Todd Stephens on the set of 'Swan Song'

Longtime fans of gay screenwriter and director Todd Stephens know a couple of things for sure about him. The first is that he has scope. He handles drama, as in the case of his feature-length screenplay debut Edge of Seventeen (directed by David Moreton), with aplomb. Stephens is also equally at adept with over-the-top comedy as he demonstrated in Another Gay Movie, his second movie as writer/director.

The other thing they know is that Stephens' hometown of Sandusky, Ohio, always figures prominently in his work. Stephen's extraordinary new movie, Swan Song (Magnolia Pictures), makes the most of his comedy and drama skills, as well as his affection for Sandusky. Stephens was generous enough to take a break from editing his last project to answer a few questions about Swan Song.

Gregg Shapiro: Your marvelous new movie Swan Song stars Udo Kier as the late Pat Pitsenbarger, the "true icon" who inspired the movie. Please say something about Mr. Pat's inspiration and influence on you.
Todd Stephens: When I was a kid growing up in this small town, Sandusky, Ohio, I would see this amazingly flamboyant guy walking around downtown in the '70s. He was different than everybody else. The town was pretty conservative, and Pat really stuck out. I always felt like I didn't fit in and so I was really fascinated with this guy who was a bit mysterious. I didn't know his story.

But when I turned 17, I got up the nerve to go to our small-town gay bar which was called The Universal Fruit and Nut Company, just like it is in the move. It's also the same bar from Edge of Seventeen. When I first went in there, I saw something sparkling on the dance floor. I looked and there was this guy that I had seen as a kid wearing a matching sequined pantsuit and being fabulous. It all connected. It was then I knew that I was home. That he was one of my tribe [laughs]. 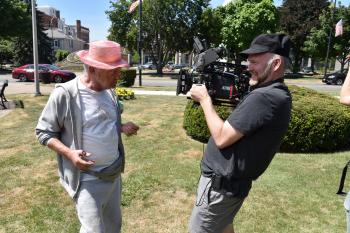 Udo Kier and Todd Stephens on the set of 'Swan Song'

The leader of the tribe, no doubt. Udo Kier, who is fantastic in the movie, will surely be recognizable to viewers from his long history of horror movies, as well as his work in movies directed by Gus Van Sant, Lars von Trier and Rainer Werner Fassbinder, to name a few. What made him right for the role of Pat?
Part of it was that I made the decision for this particular movie that I wanted to cast all queer actors for the queer parts. I don't really believe in a litmus test with that, in general, but I just felt with this particular role that I wanted someone who had lived the life that Pat had lived and had lost people to AIDS. They didn't really have to act it, could just kind of be it. That was part of it.

Also, it was a hard role to cast with someone that could be so flamboyant but in a real way; wouldn't be like a put-on. To be honest, I'm kind of sick of people acting gay [laughs]. Udo was one of the only people that had the charisma that could capture the real Mr. Pat. Even though the real Mr. Pat was not German, didn't have a German accent or anything like that. He had similar blue giant blue eyes. I considered other actors, as well, but when my casting director mentioned Udo, as soon as she said it, I knew he was the one.

One of the things that stood out for me about Swan Song is that Jennifer Coolidge gave what could be described as her most restrained performance. Please say something about that and about working with Jennifer.
I love that you say that, and I agree. I really feel like it shows a whole different side of her.

Yes, there's range there.
Yes, she really got to show her range. It was interesting because she read the script and she loved it, but she wanted to play another character. The character of Sue in the thrift store. She thought that was more her. I think she was reluctant to play the heavy, because she hasn't done that before. But I encouraged her to try something different. That's why I'm really proud to hear you say that. She's still funny, but there's a depth and a sadness the character that she brought, that I knew was in there, and I was excited to get it out.

I'm glad you mentioned Sue. She is played by Stephanie McVay who has appeared in all of your movies, from your first screenplay, Edge of Seventeen, to Swan Song. Please say something about your lengthy work history with Stephanie and why you keep returning to her.
[Laughs] we just have so much fun when we work together. There's something so real about Stephanie. I first cast her as my mother for my character in my autobiographical story Edge of Seventeen. She has this realness and a warmth about her. She always inspires me to write characters for her. I feel like every single movie I ever make, or anything I ever do, I want Stephanie to be a part of it. 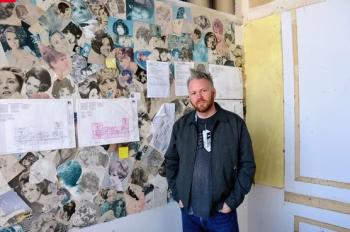 That's so great! Linda Evans plays a pivotal part in the movie. Without giving away too much, please say something about what made her the ideal actress to play Rita Parker Sloan?
Like you said, it's a small part, but the whole story revolves around the character. I knew that it needed to be somebody that had a real presence. Originally, we were going to have like a local actor do it, but I find that Linda's presence in the film really elevates the whole movie. She's another person that's always been a hero of mine.

I think about the Dynasty era with Rock Hudson. How there was a big controversy at the time, that right as Rock Hudson announced that he had AIDS the Dynasty episode where she kissed him aired. Linda was amazing back then, and a real ally. She educated people that that's not how you get AIDS. She stood up for her friend. I think that that adds to it.

The film really touched her. She's been retired for like 25 years. It was such an honor that she came...she doesn't have to work [laughs]. She doesn't need the money. Obviously, she didn't do it for the money, she did it because she loved the script. I think she's such a huge part of the movie even though her actual screen time is short.

Swan Song is set in your native Sandusky, Ohio, as was Edge of Seventeen, and your directorial debut Gypsy 83. Would it be fair to say that Sandusky itself is a character as much as a setting?
Absolutely! I really wanted Sandusky to be a character in the film. My hometown is in the Rust Belt. It's fallen on hard times in recent years but is currently having a real comeback and is coming back to life. That actually helped inspire the story of the lead character that kind of starts off lost and hopeless and is also coming back to life. The story is all about rebirth and embracing life, again, and rediscovering your joy of life.

As Udo comes back to life in the film, I wanted to show how my hometown was coming back to life. It was interesting that when we first made Edge of Seventeen, we decided to keep it a secret that it was a gay story. I remember doing like a "select all" and changing the name Rod to Rhonda in the script to make a fake script that we showed people. Because we thought that people back in 1997, when we shot it, wouldn't help us. You need a lot of help from a small town when you're making a film there on a low budget. People did ultimately find out when we were shooting and there was a lot of controversy about it.

Fast forward to when we shot Swan Song, more than 20 years later. When we first start went back there to stop pre-production, they were doing their third annual Gay Pride Festival. It blew my mind how far my hometown had come on that issue. This time around everybody knew what the film was about. Many people remembered the real Mr. Pat and adored him. It's like everybody in town became part of the film and pitched in to help out. It was kind of a case study of this small town in Ohio, how things have changed in 20 years. It gave me a lot of hope.

I'd like to ask you about Stevie Nicks, whose inspiration can be found in the title of Edge of Seventeen as well as in Gypsy 83. Have you met her, and is she aware of her influence?
I have never met her. I still, to this day, have no idea if she knows about those films. If I were her, I'd probably be pissed that I stole her song title to make a movie out of it. On the other hand, I would hope that if she saw it she was touched by the homage. It's still a lifelong question. Does Stevie know I exist [laughs]?

I understand that you are editing your next movie. Is that right?
The fact that you brought up Stevie Nicks was interesting. I'm actually doing a director's cut of Gypsy 83. A huge amount of material got cut out of that film, so I was never super happy with how the edit turned out. I'm kind of finally making it right. Maybe I'll be able to show that version to Stevie.

Swan Song: remembrance of things past