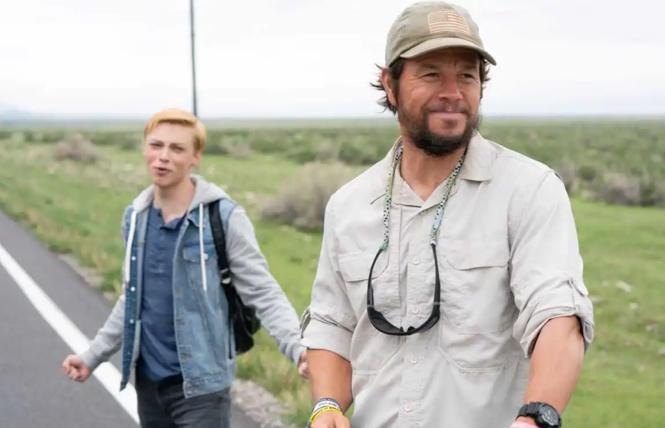 In many ways, the new film Joe Bell is Hollywood do-goodism at its worst, especially when even in the trailer and poster one sees the now dreaded phrase, 'Based on a true story.'

The theme is anti-gay bullying, certainly a worthy cause, but similar to movies like The Help —which opposes racism as seen through the eyes of a white Savior-figure— in Joe Bell we're to view homophobia through the angst of a guilt-ridden parent. It's a shallow lopsided perspective that winds up becoming an elongated PSA embedded within an irritating sentimentality that unintentionally softens rather than strengthens its underlying anti-hate message. Joe Bell is a movie that isn't sure who or what it's really about.

Joe Bell (Mark Wahlberg) is an Oregon man whose son Jadin (Reid Miller) was bullied in high school because he's gay. In the opening scenes, the two are "traveling" together as they walk cross-country while pushing a cart of clothes and belongings to New York (the place where Jadin feels he will be more supported and can escape his oppressive hometown).

Bell preaches to whomever they encounter about tolerance and accepting everyone for who they are, passing out anti-hate cards, whether it be presentations at high school auditoriums, consciousness raising at community centers, strangers at a diner, or denizens at a gay bar.

About halfway into the movie, the real reason for Bell's journey becomes clear, but any queer viewer who isn't comatose, will figure out the deception long before the big reveal in flashbacks, which won't be spoiled here.
Bell is hot-tempered and guilt-ridden because when Jadin came out to him and confessed he was being bullied, he basically ignored and didn't understand the seriousness of the situation, advising him to use the boxing lessons he had forced on Jadin to defend himself.

Bell is vaguely supportive of Jadin but clearly uncomfortable when he attends football games to watch his son perform as the only male on a cheerleading squad. Somehow other scenes of father/son singing Lady Gaga's "Born this Way" or practicing cheers together ring hollow.

Bell's inability to face his own role in Jadin's misery while directing all that anger inward becomes the source of his march for redemption that because of its outcome (which again won't be spoiled here) became a national media story in 2013. His wife (the fabulous but underused Connie Britton) supports his journey but they have marital problems, especially with Bell now ignoring their younger son Joseph. 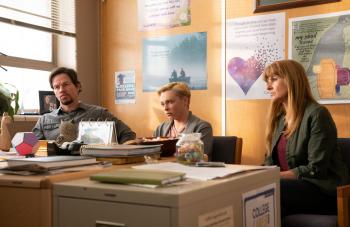 Rather than the two big revelations, the real shocker of Joe Bell comes in the credits when we see the screenplay was written by Larry McMurtry and Diana Ossana, Oscar winners for their magnificent Brokeback Mountain script. Joe Bell is a sad follow-up to that landmark effort, because here none of the characters are fully developed, especially the one bearing the film's title.

We never understand why Bell becomes a fervent activist to proclaim his empathetic message the way he does. Is his walk designed to assuage his guilt or to resolve it? Is it benefitting himself or Jadin? Is it about change or finding a purpose for his own rage-filled life.

Nor do we see many of Bell's actual encounters with other people, so we never learn what impact his efforts had on them. Was he mostly preaching to the choir rather than the homophobic parents who should be the targets of his sermon?

Miller is heartbreakingly raw as Jadin, who is defined by his victimization and the online harassment he received ("just do us all a favor. Off yourself") rather than the way he lived his life. We see snippets of a budding secretive relationship with a closeted football player but we rarely get to hear his struggles from his vantage point, only how his father failed him.

The film emotionally manipulates us into feeling sorry for Jadin, but it's an unearned empathy because the film reveals so little about Jadin the person for whom we care as opposed to Jadin the raison d'etre for his father.

And then there's Mark Wahlberg. Joe Bell may be less Bell's atonement than Wahlberg's. His career began by following his brother Donnie's footsteps as a pop-hip hop singer, followed by modeling underwear for Calvin Klein. But before that success, Wahlberg was arrested several times for race-related attacks, and jailed for 45 days for assault (demoted from the initial charge of attempted murder).

So Joe Bell has all the earmarks of a redemptive plea asking forgiveness for those youthful hurtful actions. Wahlberg is fine, even heartfelt, as Bell in a role contrary to his usual uber-masculine portrayals. However, It's difficult to recommend the film even to teenagers, queer or straight, because there is so little of their perspective enshrined here. In the latter half of the movie, Jadin serves little more than a postscript.

And yet, Joe Bell reminds us that despite all the progress made in LGBTQ equality and laws on the books, in 2021 there are still many places where it's dangerous to be openly gay and bullying is a fact of life for far too many adolescents.

Despite its mostly self-inflicted wounds, Joe Bell in its virtuosity has its heart in the right place, so perhaps it might fortuitously speak to a parent in distress and consequently make a difference in some anguished teenager's life.
https://www.joebellthemovie.com/