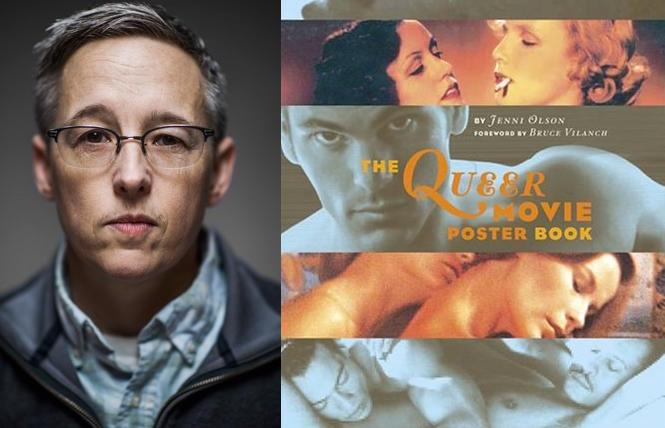 On June 18 filmmaker and film curator Jenni Olson will be honored with the prestigious Teddy Award, the Berlinale's queer film award, during the 71st Berlinale's Summer Special Festival. The awards ceremony will be live-streamed at 7pm Berlin time, which is 10am PT.

Olson shares the award with past luminaries such as Udo Kier, Tilda Swinton, Joe Dallesandro, Rosa von Praunheim, and John Hurt, among many others. The award comes to the Berkeley resident after a lifetime of working as a queer filmmaker, film historian and preservationist. She has also worked as a director of marketing for LGBTQ film distributor Wolfe Video, and was a co-director of the San Francisco International LGBTQ Film Festival, now more commonly known as Frameline.

Olson has also published many pieces of film criticism for a variety of publications and was once a contributor to Bay Area Reporter. Currently she is a film columnist for Logo's NewNowNext.

"It feels like an incredible honor," Olson said of her award. "It's particularly validating to be recognized by such a prestigious international film festival, and especially with the Teddy which is the most important LGBT film award in the world. The Frameline Award is pretty prestigious as well, but yeah, it's an incredible honor and I'm very excited about it."

It was Vito Russo's groundbreaking 1981 book The Celluloid Closet: Homosexuality in the Movies, which she read in 1986 while a student at the University of Minnesota, that moved Olson to pursue a career in queer film. She was particularly moved by Russo's message of how important it is for LGBTQ people to see images of themselves on screen. 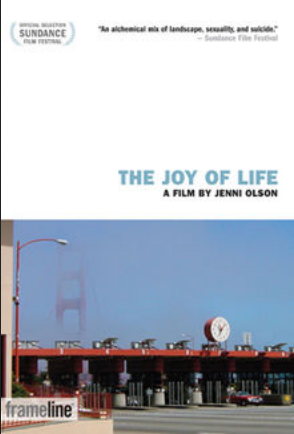 Jenni Olson's 'The Joy of Life'

"It really changed my life," she said. "It was the thing that made me come out. I started a gay film series on campus as a result of reading Vito's book."

A few years later she began attending Frameline to look for films she could show in Minneapolis. This led her to applying for a job to work at Frameline.

"At the time I thought, wow, this is basically the best job in the world in my little tiny profession of gay film," she recalls.

Olson is very excited to say that The Criterion Channel, a streaming service that specializes in foreign, independent and classic films, has launched a retrospective of her work.

"It's such a prestigious platform," she said. "It's just amazing that so many people are seeing my films. As a maker of 16mm urban landscape essay films, they're very queer, and I'm very much speaking from the perspective of a butch dyke, my work is very much about San Francisco and the Bay Area, and they're all shot here. I started shooting in 1997, and I have a reservoir of footage from shooting over the years that I draw on. I have a lot of amazing footage of the history of the Bay Area."

Olson's work has also included putting together a compilation of trailers from LGBTQ films. She said that she was fascinated by the marketing of LGBTQ films, which she refers to as an art form unto itself. Many of the trailers, she says, are lurid, sensational, campy and highly entertaining to watch. Titles she named included the original screen version of The Boys in the Band (1970) and early lesbian melodramas such as The Children's Hour (1961) and The Killing of Sister George (1968). Olson toured the compilation to various LGBTQ film festivals, both domestically and internationally.

"This was long before YouTube and the ability to see things digitally," she said.
In the past year the Harvard Film Archive has acquired Olson's entire collection of films, which includes her trailers, her feature films and her collection of homophobic "educational" films from decades past.

Olson addressed why it's important for LGBT people to see themselves on screen.
"The messages that we get are that we're still living in a homophobic, transphobic, biphobic world," she said. "It's important to see images of ourselves on screen to know that we're not alone, that there's a community out there of other people that we can connect and engage with, and that we have a culture and a history as a people."

She added that she considers herself quite fortunate that her own films have been screened at mainstream festivals such as the Berlin Film Festival, Sundance, and the Museum of Modern Art. But it's having her work shown at LGBTQ film festivals which means the most to her.

"When I come to Frameline and stand on the stage of the Castro Theatre and show my film to that audience, I feel like that's why I made the film," she said. "I made it for this audience, and this audience understands my work in such a much deeper way, and it's who I want to see it and who I want to talk to about it."

Olson's Teddy award is especially joyful to her as she is receiving it during Pride month.

"As hard as this past year has been, I feel keenly aware that I'm extremely blessed to get to do the work that I do," she said. "Being honored during Pride month for simply having followed my passion for LGBTQ film is just one more example of how blessed I truly am."