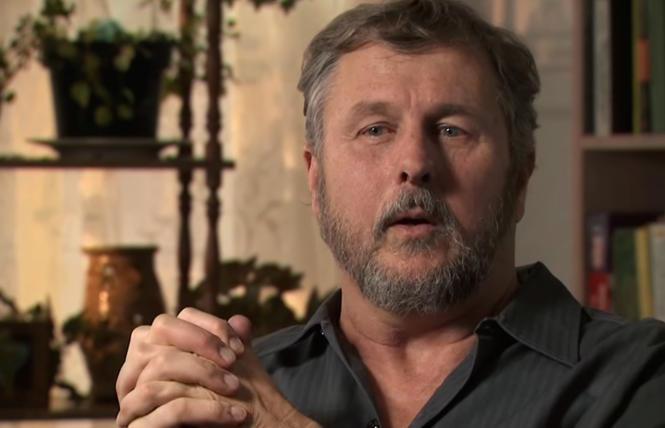 Ed Wolf in the 2011 documentary 'We Were Here,' which airs June 25 on Documentary Plus

June is such an exciting month on TV. Everybody remember that LGBTQ people exist. Ad campaigns include us. Networks have cute little Pride spots with rainbow flags (we'll pay closer attention when you have a rainbow flag and a trans flag side by side). There is LGBTQ programming everywhere.

Like Cinderella at the ball, we are seen, until June 30, at midnight, when it all returns to cisgender hetero-normativity, and we are shunted into the background again. Pay attention post-Pride to who still pays attention to you. 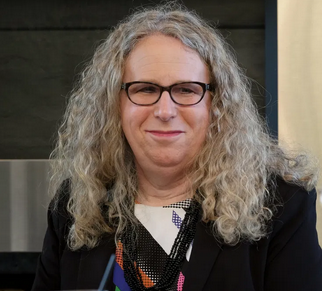 The Senate confirmed her by a vote of 52-48. Along with the Democrats, Levine was backed by moderate Republicans Susan Collins (R-ME) and Lisa Murkowski (R-AK). Gotta love that "bipartisanship" we keep hearing about.

Levine is the number-two person at the Department of Health and Human Services, where she serves directly under Secretary Xavier Becerra. Nightline excerpted a portion of a long interview where Levine spoke with out gay host LZ Granderson for his new podcast Life Out Loud.

Granderson said, "In many ways, those six lasting words of the late activist and politician Harvey Milk, act as a north star for the LGBTQ community. We know those who began the ongoing journey toward full equality were aware they likely would not be around to enjoy it."

Levine said, "Trans youth are vulnerable and they are at risk of bullying, harassment and discrimination."

"There are people who have no lived experience about trans individuals, about gender-identity issues," Levine said. "People fear what they don't understand and what is beyond their experience."

Granderson asked, "What would you tell your younger self?"

Levine said, quite poignantly, "Things will be okay. And to live your life without fear."

You can watch the entire interview with Granderson, which also includes Dr. Anthony Fauci talking about the HIV/AIDS pandemic at ABCnews.go.com. It's well worth watching. Levine really is a superb role model.

The View
Just hours before Nightline highlighted Levine, Caitlyn Jenner was making us cringe on The View. We don't do the "good LGBTQ, bad LGBTQ," like straight media loves to do, but OMG, how is this woman running for governor?

Sunny Hostin took her to church. Whoopi Goldberg snorted when Jenner claimed they were longtime friends. The interview was a car-crashian spectacular, which you can watch in its entirety on ABC.com should you want to, but one of the telling moments came when Joy Behar asked if Jenner where she stood on the issue of the Big Lie.

Jenner responded, "I am not going to get into that. That election is over with. I think that Donald Trump did do some good things. What I liked about Donald Trump was that he was a disrupter."

Behar interrupted, "But did he win? Did he win the election?"

Jenner also demurred on a question about trans athletes in student sports. She has said she opposes transgender girls playing on girls' teams. (How come no one ever talks about trans boys on boys teams, which is actually far more frequent.)

On The View, Jenner said it was "a very small issue in the state of California. We have so many bigger issues in this state like immigration." You don't want to know what she said about that or why her campaign is being advised by Trumpers who were involved in the insurrection.

More Pride
The roster of Pride programming continues through the end of the month. Here are some highlights, so set your DVR.

Transamerica (June 17, NBC News) Transamerica, hosted by Joe Fryer, will premiere on June 17 at 8 p.m. The special will examine state laws discriminating against trans Americans and showcase stories of trans lawmakers creating change in their communities.

Hit So Hard (June 18, Documentary Plus) Directed by P. David Ebersole, Hit So Hard tells the story of Hole's drummer Patty Schemel, one of the few openly lesbian musicians in the 1990s. The documentary, available in North America on June 18, follows her struggles with fame and addiction.

Food Fetish: Pride Edition (June 18, Here TV) A special Pride episode of Food Fetish will premiere on June 18. The episode will feature celebrity chef Susan Feniger and focus on some of the best female chefs and restauranteurs in Los Angeles.

Prayers for Bobby (June 20, Lifetime) A 2009 television film based on a true story, Prayers for Bobby follows Mary Griffith (Sigourney Weaver), a profoundly religious mother and wife who questions her faith after her gay son Bobby (Ryan Kelley) takes his own life. After his death, Mary draws on strength and comfort from the gay community and becomes an advocate for gay rights.

We Were Here (June 25, Documentary Plus) We Were Here is a 2011 award-winning documentary film about the HIV/AIDS crisis in San Francisco. The film, produced and directed by David Weissman with editor and co-director Bill Weber, premiered at the Sundance Film Festival in January 2011, with its international festival premiere following at the Berlin International Film Festival in February 2011. The theatrical premiere took place at the Castro Theatre in San Francisco on February 25, 2011.

We Were Here explores the profound personal and community issues, as well as the broader political and social impact, raised by the AIDS epidemic.

The film focuses on 5 different interviews of people that had a protagonist role during the epidemic. Ed Wolf, a counselor to many gay men; Paul Boneberg, a political activist; Daniel Goldstein, an HIV+ artist who lost 2 partners to AIDS; Guy Clark, a dancer who ran a corner flower stand near the Castro, supplying flowers to many funerals; and Eileen Glutzer, a nurse who helped administer clinical trials for antiretroviral drugs.

In addition, Showtime will feature more than 50 hours of programming.

Hulu is honoring Pride Month with new content and collections in the evergreen LGBTQ+ Hub including Changing the Game, Season 2 of Love, Victor, new series Rurangi and film The Obituary of Tunde Johnson. Additionally, the two new 2021 collections, "Trans Stories" and "Multicultural Stories," will be prominently featured in the Pride Hub throughout June.

So for Pride and beyond, you know you really must stay tuned.