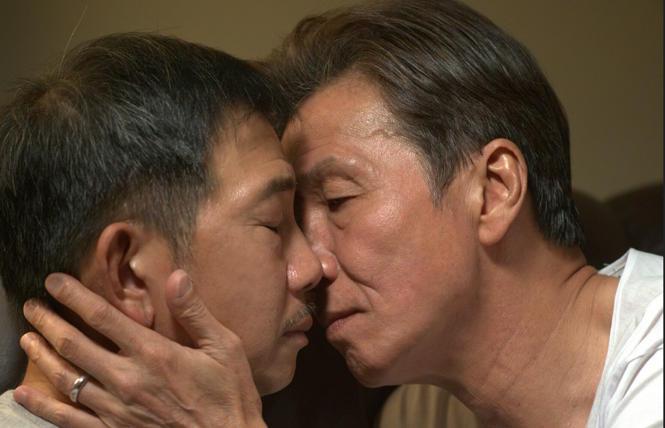 Anyone the least bit familiar with 21st-century international gay cinema will recognize the name Ray Yeung. He's the Hong Kong-based filmmaker behind the movies Cut Sleeve Boys (2006) and Front Cover (2015). While his previous two full-length features dealt with a younger age demographic, his new movie, Twilight's Kiss/Suk Suk (Strand Releasing) introduces us to men in the twilight of their gay years.

Fastidious Hong Kong taxi driver Pak (Tai-Bo) is married to the long-suffering Ching (Patra Au), to whom he is not especially kind. Pak and Ching have a married son Lok (Gordon Wong Kwak Fai), the father of their granddaughter Lei Lei (Chi Sin Pun). They also have a daughter named Fong (Hiu Yee Wong), who becomes engaged to Zheung (Yixin Hu) because she is pregnant. Unbeknownst to Ching (or is it?), Pak leads a double life. Loving father to his children and granddaughter at home, he cruises public bathrooms and parks for sex with men.

On one such cruising expedition, Pak meets retiree Hoi (Ben Yuen). Their initial encounter is a bit awkward. Pak is all about getting down to business, but Hoi would rather begin as friends. Like Pak, Hoi is also leading a double life. 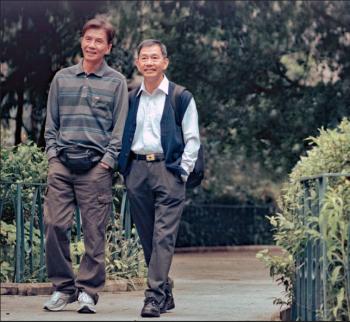 A single father, Hoi lives with his religiously conservative son Wan (Lo Chun Yip) and Wan's wife and young daughter. Even though he's closeted at home, Hoi not only frequents gay bathhouses, he also attends meetings of a gay group at the local community center. It is through the scenes at the meetings that viewers not only get a feel for what it is to be gay in Hong Kong, but also what it means to be an aging gay man.

After establishing a friendship, Pak and Hoi pay their first visit to the bathhouse where Hoi has gotten them a room. From there, in the midst of complicated circumstances, the men embark on a romantic relationship. As with the elder lesbian couple in Filippo Meneghetti's outstanding Two of Us, the relationship is treated with the utmost respect.

Regardless of their feelings for each other, there are challenges to be faced. Hoi's level of outness presents issues for the pair. Both men's home lives become increasingly difficult. Hoi's son's religious insistence eventually wears him down. This creates yet another conflict because Pak is not in any way a religious man. Meanwhile, Pak gives his taxi to his new son-in-law so that he may make a living to support Fong.

More than anything else, Twilight's Kiss is recommended for its sensitive and realistic depiction of older gay men, particularly those in the closet. This really comes through when Pak invites Hoi to attend his daughter's wedding banquet and the men invent a story for how it is they know each other. The only complaint about the movie is that the open-ended conclusion, which finds Pak sitting alone in a church, makes the movie feel rushed and a little confusing.

In Cantonese with English subtitles. Rating: B