Together Together: Trans actress Patti Harrison shines in lead role 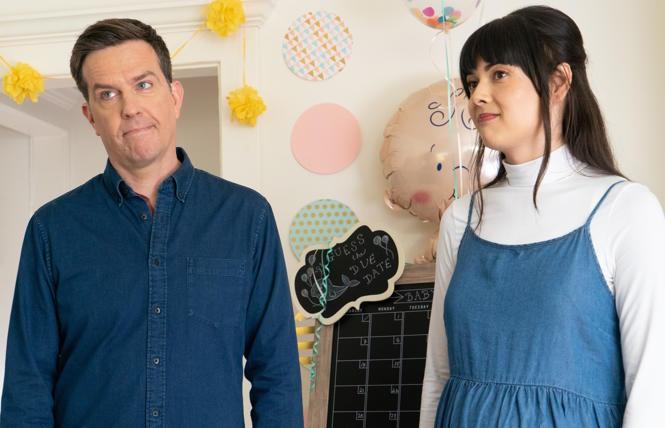 Ed Helms and Patti Harrison in 'Together Together'.

For some time now transgender actors have been campaigning Hollywood to start casting them in trans roles, as most trans roles have been played non-trans actors. Now, along comes a film that turns the trans actors' issue on its head, a film in which a trans actress plays a cisgender pregnant woman.

Though Ed Helms is top billed, its transgender comedian Patti Harrison who walks away with the top acting honors in Together Together, Nikole Beckwith's charming new comedy/drama about the relationship between a prospective single dad and his surrogate. Helms is quite good as a lonely guy who wants to be a dad more than anything in the world, but it's Harrison who takes center stage as the film progresses.

The film opens with what at first appears to be a job interview, but it's actually Matt (Helms) interviewing a possible surrogate mom. Anna (Harrison) makes it clear that she's not going to let him cross her boundaries, a point she drives home with even greater clarity when Matt shows up at her front door after she's carrying the baby. A young man named Bryce (Evan Jonigkeit) is leaving her apartment, and Matt wants to know if Anna and Bryce had sex. Anna informs Matt that this is none of his business and that she intends to do whatever she pleases. Still, she accepts Matt's dinner invitation.

As the pregnancy progresses a platonic friendship develops between the two. Matt, who's been unlucky in love, obviously wants to be close to Anna. She, however, is planning to move out of state to go to school after the pregnancy and tells Matt that it's probably best if they're not friends. But as the birth date draws closer, it becomes apparent that they care for each other more than either is willing to admit.

Together Together is a lovely film about loneliness and reaching out, a story about two people who might have fallen in love under different circumstances. Helms and Harrison play off each other beautifully, with each of them conveying a simultaneous desire to reach out and a fear of doing so. They get able support from a wonderful supporting cast.

Lesbian actress Tig Notaro is wasted in an undeveloped role as the therapist whom Matt and Anna see in order to figure out the whys and wherefores of their complicated friendship, while Sufe Bradshaw is amusing as a seen-it-all done-it-all hospital technician.

Beckwith's otherwise insightful screenplay does leave one unanswered question: is Matt gay or straight? When Anna asks Matt about past relationships, he mentions one that "didn't work out," but he avoids saying whether or not his ex is male or female. At no time during the film is Matt's sexuality established, leaving it to the viewer to decide which side of the fence Matt is on.

The film was shot in San Francisco and includes a scene filmed at the intersection of 21st Street and Sanchez, as well as another scene shot by the J Church Muni station in Dolores Park, though for the most part, the film is shot indoors and doesn't take advantage of the city's stunning vistas.

Together Together is ultimately a reflective story, funny in parts but also quite serious at times. It's a low budget film that won't win any major awards, but it deserves to be seen. It's a sweet and lovely film that explores the possibilities of platonic love. Hopefully the film will launch Harrison on a career as a leading lady of cinema.