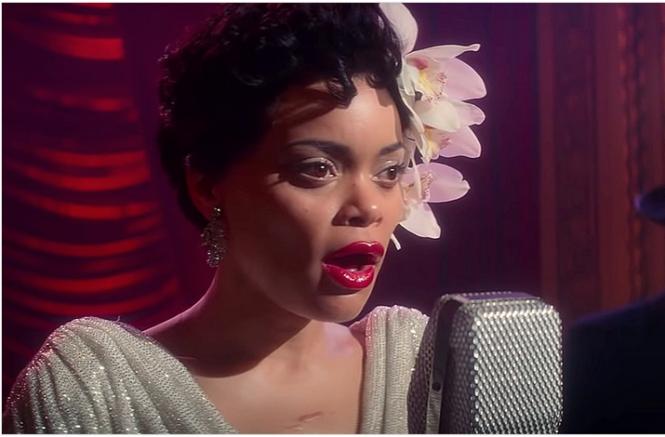 The queer, Black classic that everyone in the LGBTQ community deserves is here. We rarely get a serious insight into an actual queer black life, lived on its own terms against all odds, to become the shining (and imperfect) standard by which all others are judged, on every level.

The United States v. Billie Holiday, as a film, is an indictment, instructional guide and spiritual love letter rolled into one. Director Lee Daniels has once again created a masterpiece that is factual and will enhance and extend his legacy, creating stars out of hard-working, multi-talented and multitasking actors and actresses of color. Daniels has garnered performances from them that win awards and create legendary careers that contribute to and critique American pop culture.

The real Miss Billie Holiday is the female representative of what it means to be an artist, immortal star and activist. Like her mentor, Louis Armstrong, she is a self-taught and -directed artist whose influence has forever changed musical technique, timing and interpretation.

She is also the polar opposite in persona of Armstrong, as he presented himself as the gruff-voiced, happy-go-lucky, joy-filled, sweating, smiling light of American artists as ambassador and entertainer.

Billie, however, was the dark, seductive underbelly of everything that was taboo and tumultuous in jazz. She literally was artist as fetish; a still, doll-like figure, swathed in shimmering white gowns, performing intoxicated on at least two substances, eternally singing about the wrong man ... after the wrong man. She was the flower beneath the flower, with arched eyebrow and mocking aura. Armstrong was and is adored, while Holiday is pitied, but worshiped.

The film reveals another side of Holiday's tortured life. She was envied and despised by the most powerful men in the highest places of racist, sexist white America, including J. Edgar Hoover, then-director of the FBI and Harry Anslinger, the first commissioner of the US Treasury Dept.'s Federal Bureau of Narcotics.

Holiday's bravery in singing the anti-lynching screed, "Strange Fruit," is a political and artistic call to arms that helped spark the Civil Rights Movement and fear among the status quo. The fact that a foul-mouthed, drug-addicted, ex-prostitute, adulterous queer black woman repeatedly dared to speak truth to power in song made her a legend in her own time. 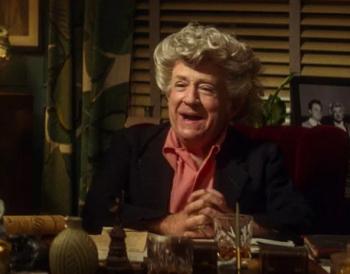 In the film, five queer characters are introduced as integral to its story line within the first five minutes, and remain throughout, signifying and authentic. The heterosexual cisgendered men surrounding, leeching from, framing and betraying her, are all immediately obvious to both the audience and Holiday.

Wearily for her, they are part and parcel to her life, or as it is known with the black gay quarters of the jazz world, "the life," and she circumnavigates it and them as well as possible, all while trying to kick her habit, while being hounded into her untimely and inevitable death at the age of 44. The final image of her shackled ankle to her hospital bed is one of film's most heartbreaking.

There are not enough accolades and awards to give to this soon-to-be-classic film, which will be seen for countless generations to come. All of the film's roles were well suited for the actors who portrayed them, who provided sterling performances. Everyone behind the camera ought to be commended and appreciated for their technique and execution of craft and skill.

Of course, the film's jewel is its star, Miss Andra Day, as the raspy, world-weary and determined icon, whose evening gloves and eyes masked steel and scars, in more than one sense.

Trevante Rhodes, as the gorgeous undercover narcotics agent, Jimmy Fletcher, who loves, admires, pities and eternally regrets his hands-on part of her downfall, brings multilayered humanity to a character whom he could have easily portrayed far less sympathetically. 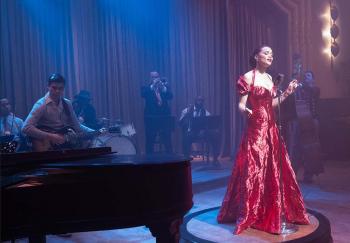 Andra Day sings in a scene from 'The United States v. Billie Holiday'

Garrett Hedlund, as her ever-present nemesis, Mr. Anslinger, casts a malignant shadow over Holiday's every moment of glory, love and fame, menacing even tuxedo-clad, front row at her first sold-out Carnegie Hall concert.

Natasha Lane is brilliant but all too brief, glamorous and slightly disheveled, in her role as Holiday's lover and confidante, legendary actress Tallulah Bankhead.

Leslie Jordan pops up as the impish and clueless, racist columnist Reginald Lord Devinne, as he learns "what it means to be a 'colored' woman."

Finally, a minor performer who stood out in a major way in the film is actor Miss Lawrence as Miss Freddie, Billie's fashionisto stylist and steadfast friend. In one of the film's major flaws, Freddie was not allowed to perform a duet with Holiday, however, he is one of the film's most observant and critical characters.

Hulu is the service to watch for creating films that continue to carry the torch that reveals the human condition, through the lives of communities and people from co-cultures that impact art, politics and life as we know it and want to live it.

The LGBTQ community should be collectively grateful to Miss Holiday for having the nerve and the style to sing "Strange Fruit," called The Song of the 20th Century by Time magazine.