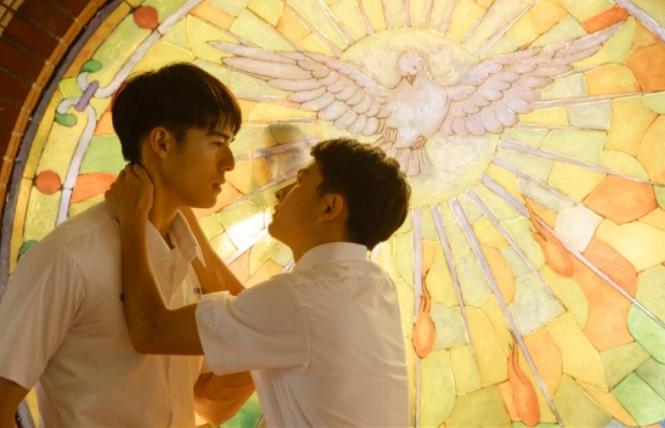 Edward Chen and Tseng Jing-Hua in 'Your Name Engraved Herein'

Breathtaking change in LGBTQ equality is occurring all over the globe. On May 17, 2019 Taiwan became the first Asian nation to legalize same-sex marriage. But as writer/director Patrick Liu wants to make clear, reforms had their roots over three decades prior, after martial law was lifted in that country in 1987.

His 2019 film, Your Name Engraved Herein, which just started streaming on Netflix this month, argues that once Taiwan switched over to a multi-party democratic system, freedom of speech and press also were embedded, so people began expressing who they were and wanted to be, despite remaining a culturally conservative society.

Liu's film begins in 1987; though homosexuality is still ostracized socially, a sense of individuality is burgeoning. Despite taking decades to blossom, it is this questioning of authority and defiance against a stifling tradition that will eventually permit marriage equality.

The film opens with a bloodied and bruised A-han (Edward Chen) talking to priest Fr. Oliver (Fabio Grangeen) about his fight with fellow student Wang, called Birdy (Tseng Jing-Hua) at the Catholic boarding school they both attend. Flashbacks reveal they had met at a swimming pool training session and both are involved in the school marching band, headed by Fr. Oliver.

Birdy is a thrill-seeking free spirit, a James Dean-like rebel, modeling himself on the unstable Vietnam veteran, played by Matthew Modine, in the 1984 movie Birdy. Birdy comes to the aid of an effeminate, presumably gay student when a bunch of his classmates physically attack him and attempt to set his genitals on fire with a cigarette lighter, raising suspicions about his own sexual proclivities. 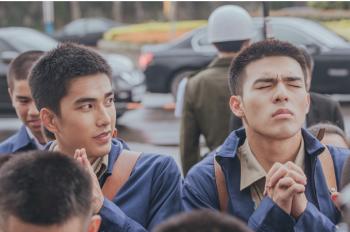 Tseng Jing-Hua and Edward Chen in 'Your Name Engraved Herein'

The quiet, soft-spoken A-han is starting to recognize he is gay and is attracted to the impulsive but seemingly self-assured Birdy. Fr. Oliver, an émigré to Taiwan under mysterious circumstances, becomes his confidante, acting more like a therapist than a priest, as A-han tries to reconcile his faith with his emerging sexuality, even in vain later romancing a female friend.

The film's epigraph is a passage from the Song of Solomon, 8:7: "Many waters cannot quench love, neither can the floods drown it," reiterating the theme love is love, no matter what form it takes.

Meanwhile, their relationship is complicated the next semester when the school goes co-ed and Birdy starts dating a female agitator student, nicknamed Ban-Ban (Mimi Shao), which leads to A-han's jealousy, sense of betrayal, and dissension with Birdy.

But despite his rebelliousness, Birdy cannot accept himself as gay, even after two of the best scenes in the movie, a shower episode where they become nominally intimate and kiss each other, and a brief vacation to a secluded seaside cove where the couple go skinny-dipping and lie naked on the beach talking about their dreams. Both encounters lead Birdy to withdraw from A-han and intensify his relationship with Ban-Ban.

The penultimate tear-inducing incident in this middle section of the movie is a pleading A-han phoning Birdy, singing a song (with the aid of vocalist Crowd Lu), "Your Name Engraved Herein" (whose music video has been viewed over two million times on YouTube), written for him, confessing his love. 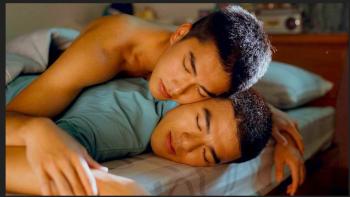 Tseng Jing-Hua and Edward Chen in 'Your Name Engraved Herein'

The final lengthy epilogue takes place almost 30 years later at a school marching band reunion and in Montreal at the funeral of Fr. Oliver. Temporarily reunited as mature adults, A-han and Birdy reflect on their younger selves.

Your Name is one of those films that is good, but with a little more effort in the screenplay and editing, could have been great. The movie feels disjointed in the way the flashbacks are presented, distorting time elements; at intervals one isn't sure if Birdy is supporting or rejecting A-Han.

Much is initially made about the lifting of martial law, but the politics is very soon sidelined —and towards the end forgotten— by the romance of the couple, so it begins to feel myopic, even suffocating. Because there are such cataclysmic changes occurring in Taiwanese society, we crave more dialogue between the political and personal, as well as to learn more about the couple's family and their fellow classmates.

Instead, with the exception of Fr. Oliver, all the other characters become caricatures, like the bullying head student, the military dictator-like headmaster intent on keeping the sexes separate, and A-han's despotic father.

There is only one para-school incident where A-han and Birdy are accidentally swept into a Taipei street demonstration, with a re-creation of real life gay activist Chi Chia-wei, wearing an outfit made out of condoms, shown protesting gay discrimination by carrying a sign inscribed 'Homosexuality Is Not A Disease,' and is promptly arrested by police.

For a film trying to link political change with a reversal of traditional beliefs about sexuality, few connections are shown, and there are scant big emotional payoffs. Also, Your Name, at slightly over two hours, is too long by at least 15 minutes and editing could have sped up the slow pacing of the first portion of the film, to its advantage.

Released before the May 2019 legislation, Your Name is the highest-grossing queer film in Taiwanese history (about $3.2 million), a milestone which alone reveals how attitudes have changed since 1987. Let's hope that with Your Name Engraved Herein, Taiwan may be entering an exciting new era of openly queer cinema.