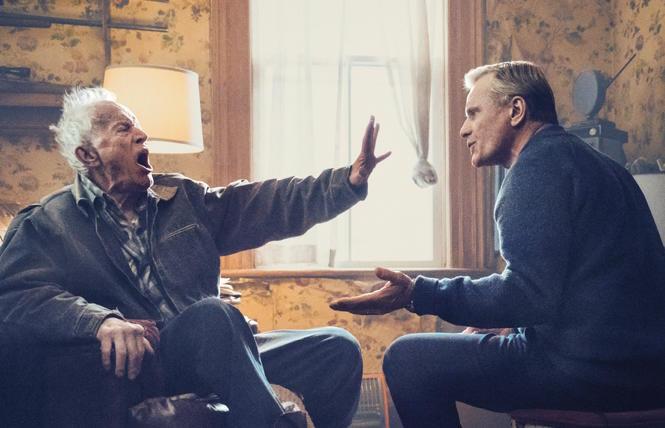 2020 will be remembered for the COVID pandemic and the election of Joe Biden, but for movies it might be designated the Year of Dementia. There have been numerous feature films and documentaries addressing this serious subject, including The Artist's Wife (Bruce Dern/Lena Olin), The Roads Not Taken (Javier Bardem), Dick Johnson Is Dead (Netflix doc about a daughter reenacting imaginative scenarios of her dementia-suffering psychiatrist father's impending death), the BBC's Elizabeth Is Missing (with Glenda Jackson's bravura silver screen return after a 30-year absence), the Australian Relic, and The Father, starring Anthony Hopkins with a virtual lock-in nomination for a Best Actor Oscar.

With Falling, the inevitable LGBTQ-related spin on this issue has arrived, written and directed in his debut by Viggo Mortensen, thrice Oscar-nominated actor, but forever earmarked as Aragorn, the King of Gondor, in The Lord of the Rings. A contemporary polymath, dabbling in poetry, experimental music, and abstract painting, Mortensen has dedicated Falling to his brothers. This is a personal endeavor where he seems to be wrestling with his own family dynamics, in this deeply problematic film, that regardless how well-intentioned, comes close to being a complex mess.

Occurring right after the 2008 election, Mortensen plays John Petersen, an airline pilot, who helps his father Willis (Lance Hendriksen) in the early stages of dementia. Willis can no longer live alone at his upstate New York farm, so he must relocate to Los Angeles, where John lives with his Asian-American husband Eric (Terry Chen) and adopted daughter Monica (Gabby Velis). Willis is a raging sexist, racist, misogynistic, homophobic jerk (i.e. "California is for c---suckers and flag-burners").

Flashbacks relate the stormy childhood relationship between father and son, fittingly introduced when Willis on bringing his newborn baby back home from the hospital, whispers to John, "I'm sorry I brought you into this world, to die." Willis is dysfunctional from the start, eventually divorcing two wives, since deceased, but still alive in his deteriorating mind. 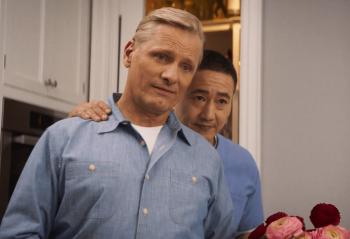 The only positive memory happens when four-year-old John, during a lake outing, accidentally shoots his first duck, thrilling Willis in a joint common endeavor, though teen-ager John will later renounce hunting. Willis is both unwilling and unable to adjust to Californian life. He publicly throws out obnoxious slurs whether he's in a museum, restaurant, or at the family dining table.

The viewer is never sure whether Willis's horrific behavior is caused by dementia or more likely —based on his hallucinating memories— just exacerbating long-entrenched dysfunctional attitudes. The real mystery is why John tolerates these emotional attacks. There is eventually a confrontation between John and Willis in the movie's denouement, with ambiguous results and a lingering sense of a retreating John.

Family matters
Probably the best scene is a family reunion dinner with his sister Sarah (Laura Linney in a nine-minute cameo) where they endure Willis's unrelenting bigoted insults and sneers, but her son rebukes him, screaming how hateful he is. It's the cathartic moment for which the audience has been waiting. Like John, Sarah accepts Willis's abuse and the as-usual outstanding Linney registers a wide range of emotions on her face: rage, shame, incredulity, apology, and resignation.

The chief deficiency of Falling is the script. John is a recovering alcoholic (again no hints about how or why) who won't take Willis's bait and seems almost saint-like in absorbing Willis's verbal blows. This seems to be John's maladaptive coping mechanism, but it is almost unbearable to watch.

Willis 'accepts' John's gayness and his partnership with Terry, even though he is offending them at every opportunity, especially Terry's ancestry. We learn virtually nothing about Terry or his relationship with John. 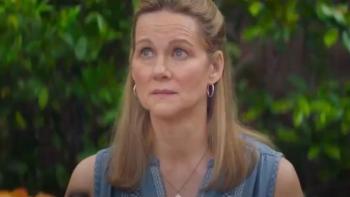 Mortensen identifies as straight, yet has chosen to make John gay. Reportedly, Mortensen couldn't find funding for the movie unless he agreed to star in it, but as excellent an actor as he is, I doubt LGBTQ audiences will find his portrayal entirely plausible. Chen, whose orientation is unknown, despite having few clues to develop his role, seems more convincing.

Hendriksen, best known for the Alien films, gives an over-the-top performance, as if his Id has been unleashed and he can verbalize every appalling thought or barb he ever wanted to say. The difficulty is that Willis is not a character, but a caricature, so Hendriksen's acting evolves into a histrionic free-for-all. The only humanity Willis exhibits is a caring connection with Monica, but again we are given no tip-offs or background as to why that is the case.

Timing is everything in Hollywood and Falling has the misfortune of being released in the same period as the other gay dementia film, the magnificent British Supernova, starring Colin Firth and Stanley Tucci, written and directed by actor Harry Macqueen (reviewed in the Bay Area Reporter). The movie features a gay couple traveling across England one last time to visit family and friends before Tucci's early onset dementia permanently disables him or he opts for suicide.

This restrained, tender movie, probably one of the year's LGBTQ cinematic highlights, underscoring two career best performances from Firth and Tucci (both straight, yet best friends for two decades), is much more credible in its depiction of an LGBTQ marriage than Falling, which borders on being clichéd and unrelatable. It is unimaginable that any queer person today would allow his husband/wife/child to be so humiliated with the senseless toxic vulgarity Willis hurls at John's family.

Falling's only redeeming quality is a visual elegant poetry (the changing seasons, horses, wildlife as well as its lyrical score composed by Mortensen) in the upstate New York farm episodes where Willis seems most content. He relates far better to nature than he does to people.

While it's obvious Mortensen is supportive of the LGBTQ community and the film has all the hallmarks of a passion project with the estrangement theme emitting a few resonant sparks, Falling fails to justify why the audience should care about and uncomfortably endure this draining melodrama of a wretched mean-spirited human being and his enabling codependent accomplice.