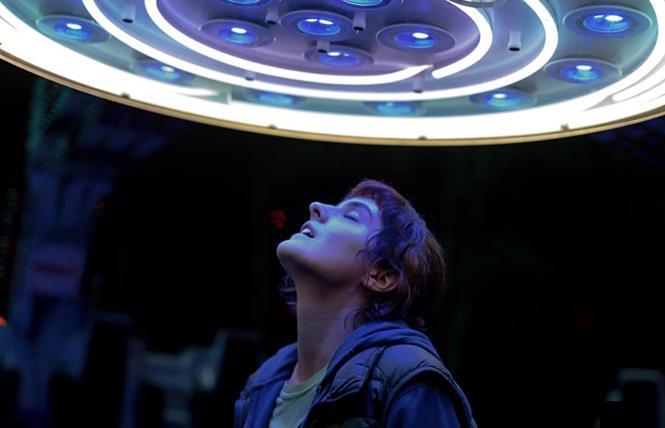 In the not-LGBT but sort of 'queer' category, director-writer Zoé Wittock's Jumbo, Jeanne (Noémie Merlant) starts her first day working at a small amusement park set near a French town's waterfall. This is convenient, since she's been visiting the park since childhood, tinkers with small light sculptures made from bicycle wheels and spare parts. She also has a sort of fetish for the rides, particularly the Move It, a swirling light-blinking machine which she nicknames Jumbo. She has no interest in the mild flirtations from Marc (Bastien Bouillon), her new male boss, despite her free-spirited divorced mother (Emmanuelle Bercot) goading her into dating. One night, as she performs her custodial duties, Jumbo comes to life, of sorts, like a bolted-down Transformer. It "talks" with her via red light/green light Yes/No questions and gives her late-night rides. Her "coming out" does not go well, and until the ending, events take a dark then uplifting, if not odd turn.

Dennis: The Man Who Legalized Cannabis, tells the story of vaunted pot activist Dennis Peron, who died in 2018. Before marijuana dispensaries became legal and commonplace, Peron fought for legalization for medical use, making San Francisco the first city to legalize pot for medical use in 1991, and the statewide Prop 215 in 1996, which passed. In 19 minutes, director Brandon Moore blends new interviews, historic footage, news video excerpts and photos to tell the story of the first Cannabis Buyers Club, with mention of Mary Jan Rathbun, aka 'Brownie Mary,' all in context with gay men amid the AIDS epidemic, who united with people enduring glaucoma, cancer, arthritis and other ailments. The title is a bit of a misnomer, as the film is more about the overall movement and not a biographical profile of Peron.

The Passing On documents a San Antonio, Texas Black-owned funeral parlor owner and his staff in director Nathan Clarke's matter-of-fact style. It solemnly explores the reality of mortality, and how the dwindling community of Black morticians sustain their businesses.

"I have to separate my emotions from everything else, because I'm here to do a job," says Texan chief embalmer James Bryant, who buried even rodents as a child, and was recently honored as Embalmer of the Year. "I don't see how I can help a family through grief if I'm grieving," says Bryant. The film also focuses on Bryant's life as a recovering addict who deals with PTSD from his harrowing time in the Vietnam War.

Bryant's young intern, Clarence Pierre, is conflicted about his commitment to a career in mortuary science due to the judgment he feels from the Black community as a gay, Christian man. He also represents a younger generation not tied tied to traditions.

With historical photos, Bryant recalls how Black people had to create their own funeral parlors due to discriminatory racism and segregation. Tony Hendricks speaks of the process of dressing and make-up, and how schools had never taught how to treat a deceased Black person's body, down to specific chemical variances. A few shots of deceased people may be disturbing to viewers, but overall, this profoundly humane film includes humor and pathos in showing realistic perspectives on the inevitable.