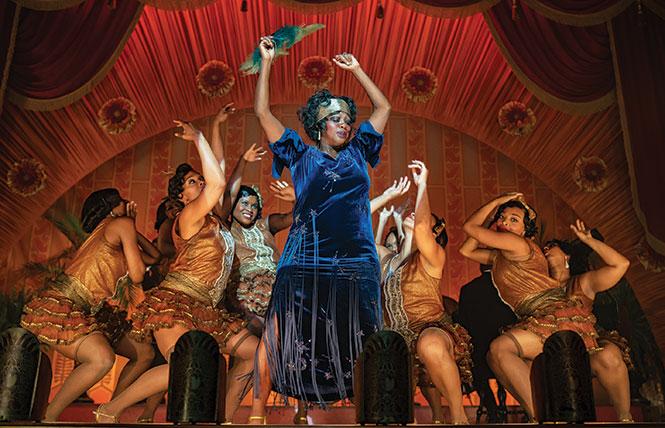 The first few moments of Ma Rainey's Black Bottom are electrifying. It's 1927 in rural Georgia. Hundreds of people, all of them Black, are lined up at the entrance to a huge tent. Inside, Ma Rainey, the Mother of the Blues, is singing her heart out. She works the crowd into a frenzy as she gyrates on stage, unashamedly flaunting her sexuality. Ma Rainey knows how to command an audience, and for Viola Davis Rainey is the role of a lifetime.

Davis burns a hole through the screen in the film, which is now streaming on Netflix. Ma Rainey (1886-1939) was an early African American blues singer, one of the first to achieve stardom and to record.

The bulk of the film is set in a Chicago recording studio, where, according to the film, Rainey didn't take any guff from anyone. She tells both her white manager and the white owner of the studio exactly what she will and won't put up with. At her insistence, her nephew Sylvester (Dusan Brown) is going to do a spoken intro to one of her songs, even though the young man has a terrible lisp. As she demands, young Sylvester does the intro over and over until he gets it right, or she'll refuse to sing. Ma always gets her way.

It may be 1927, yet Rainey makes no attempt to hide the fact that Dussie Mae (Taylour Paige), her young female companion, is her girlfriend. Ma puts her arms around Dussie Mae, bites her earlobe, and whispers into her ear. Ma Rainey is a woman decades ahead of her time, a woman who fought hard to get to where she is and doesn't give a hang what anybody thinks. Davis plays this wonderful role for all it's worth.

But Ma Rainey's Black Bottom really belongs to the late Chadwick Boseman in his final role. Boseman plays Levee, a trumpeter in Ma Rainey's band. Levee has his eye on Dussie Mae, and the bisexual young woman is interested. Levee is ambitious. His attempts to rearrange Ma's songs are quickly shot down. He has hopes of recording his own songs, but that doesn't happen either. Levee has big dreams, dreams which aren't going to come true. 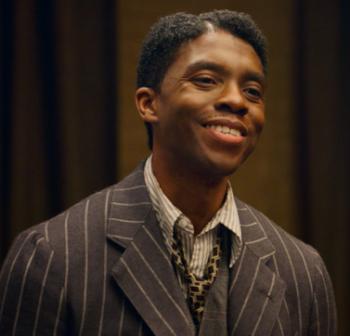 Ma Rainey's Black Bottom is the perfect swan song for this wonderful actor, sadly lost to cancer this past summer. Boseman's performance is extraordinary. He imbues Levee with an intensity that is mesmerizing. In one unforgettable scene, he recalls a childhood experience of watching his mother get raped by a group of white men.

The men also cut him, leaving him permanently scarred. Levee recounts this horrific story with a combination of sadness and anger that's heartbreaking. The scene underscores the tragedy of Boseman's passing and makes one wonder how many more great performances he might have given had he lived.

"Our last week of filming was incredibly intense," said director George C. Wolfe in a statement. "Especially for Chadwick Boseman. His character Levee had a series of scenes which were physically demanding as they were emotionally raw. The work was Herculean, the stakes incredibly high, and day after day, take after take, Chadwick more than delivered. His work was brilliant."

Wolfe noted that he and Boseman had talked about doing a play together, or perhaps another film.

"We are all still reeling from the loss," he said. "What a great actor and a gracious human being. Or to paraphrase Ma Rainey, 'The world was made better by his song.'"

Ma Rainey's Black Bottom gets its title from one of Ma's songs. The film was co-produced by Denzel Washington and is based on the award-winning play by August Wilson. Production values are superb. The sets and costumes beautifully evoke the film's 1920s setting, while Tobias A. Schliessler's cinematography and Wolfe's assured direction keeps the film from feeling stage-bound. Though Ma Rainey is set primarily in one building, the film's camera work is fluid and keeps the story moving at a nice pace.

This is by far one of the year's finest films. It should be honored come awards time, with well-deserved Oscars hopefully going to both leads. RIP Mr. Boseman.