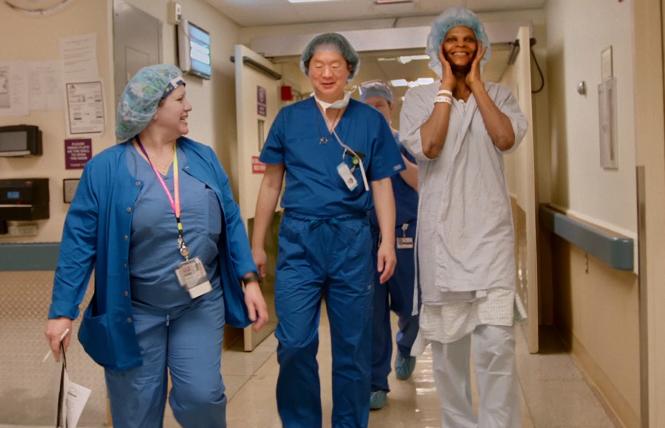 Mahogany, right, with Dr. Jess Ting, center, in a scene from "Born to Be." Photo: Courtesy Kino Lorber

In the past few years there has been a quiet revolution in medical treatment and surgery for transgender patients, aided by the Affordable Care Act, giving people an opportunity to have health care services hitherto unavailable to them.

The leader in this emerging field has been Mount Sinai Hospital in New York City with its Center for Transgender Medicine and Surgery, or CTMS, founded in 2016. A new documentary, "Born to Be," screening virtually at the Roxie Theater, profiles CTMS; its lead practitioner, straight surgeon Dr. Jess Ting; and features the journey of five patients as they undergo gender affirmation surgery.

CTMS is the first comprehensive center of its kind with its multidisciplinary, integrated system of care for transgender and nonbinary people. Over 1,200 surgeries have been performed, including revolutionary improved facial feminization, vaginoplasty, and phalloplasty procedures devised by Ting, such that over 6,000 patients have received treatment. So among others, the film follows Mahogany, a former male fashion model from South Africa, as she has the downward sloping masculine curve of her forehead reduced and Jordan having a functioning penis created out of a skin graft from their forearm so they can have sexual relations with their spouse, Alister.

The film's director, Tania Cypriano, answered questions from the Bay Area Reporter in an email interview. She declined to share her age or how she identifies.

Through a friend Cypriano was introduced to the film's producer, Michelle Hayashi. Hayashi had just heard about the high rate of suicide attempts among transgender people and wanted to do something to help the community. She knew CTMS was starting and introduced Cypriano to Ting, who had been announced as the lead surgeon. As for Ting's patients profiled, seven were followed closely, with five chosen for the film.

"Even though it's impossible to have a full representation, I tried to make sure patients came from a diverse background, not only in terms of ethnicity, gender or age, but also with regard to financial background [and] as far as having support from a family or loved one, or none," Cypriano wrote.

Originally, Ting was just going to help obtain access to the hospital and the documentary was going to be only about the patients.

"But as soon as cinematographer Jeffrey Johnson and I started filming, we were both quite moved by his interactions with patients and knew he should be part of the story we were telling, Cypriano wrote. "It took a while to convince him, but I explained that if our goal was to help the trans community, we would help best if we made a film that could educate the larger society and promote change. By following Dr. Ting, we had a window to speak to more people because of who he is."

The title of the film is derived from the 1979 French disco song, "Born to Be Alive" (sung in the film by Mahogany).

The filmmakers are aware that not all transgender people need or want surgery, but they focus on those who decide to transition surgically.

"I hope that the film speaks to TGs who decide not to transition surgically in the same way that I hope it speaks to cis audiences," Cypriano wrote. "Not everybody is the same, and for those who decide to transition surgically, we need to understand who they are and why they make those choices. Ultimately, 'Born to Be' is about empathy and how it has the power to transform lives."

One of the profiled patients, Garnet Rubio, pursued a modeling career in New York and, despite having the full support of her family plus successful surgery, attempted suicide.

"It was a difficult choice to include Garnet's suicide attempt in the film, but it was one that made sense in order to convey an important message, especially for TGs looking into surgery as part of their transition," Cypriano wrote. "Surgeries can be life-saving and extremely helpful to people who have gender dysphoria. But gender affirmation surgeries do not cure depression or trauma. So when people have experiences that hurt them or take them to a place they thought they would be free from after their surgery, it's very difficult. And even though the film didn't have time to explore more, that's why mental health and support is not only important before but also after surgeries."

The documentary makes clear that there aren't enough doctors specializing in transgender care.

"There was, and still is, quite a bit of discrimination against the field of transgender surgery," Cypriano explained. "And the reason for the lack of doctors is mainly because gender reassignment surgeries are not taught in medical schools and there is no specialty program that can help prepare doctors for them. However, during the period we were filming, we learned about Mount Sinai's first transgender surgery fellowship program in the country and met Bella Avanessian, the first fellow to join the surgical team at the hospital. Since then, two more doctors have studied in the program so now they have four plastic surgeon doctors working with gender affirmation surgeries instead of only one."

"First, changing people's perceptions about these surgeries," Cypriano wrote. "And then, for those who may be interested to go into this field, to know that now there are programs available to study not only in NY but other places in the country as well. Our film has started to be shown in medical schools and this is one of the things I'm most excited about in terms of the film's distribution."

But perhaps executive producer J. Winkelreid, in the press notes, personally embodies the message of "Born To Be."

"I first met Dr. Jess Ting in his office: depressed, dysphoric, and desperate. A few weeks after my operation I went to see Dr. Ting for my follow-up appointment," Winkelreid writes. "He took my bandages off and I was speechless. I knew right away that my life was forever changed, and even better yet — beginning. Drawing upon my personal life experiences as a nonbinary person, I was able to inform and shape the filmmaking process. This documentary answers questions people are afraid to ask and opens a dialogue about the transgender population. 'Born to Be' provides a full inside look into what it means to transition surgically in today's society. It's here to educate, inspire, and change lives for the better."

To stream via Roxie's virtual cinema, go to https://www.roxie.com/