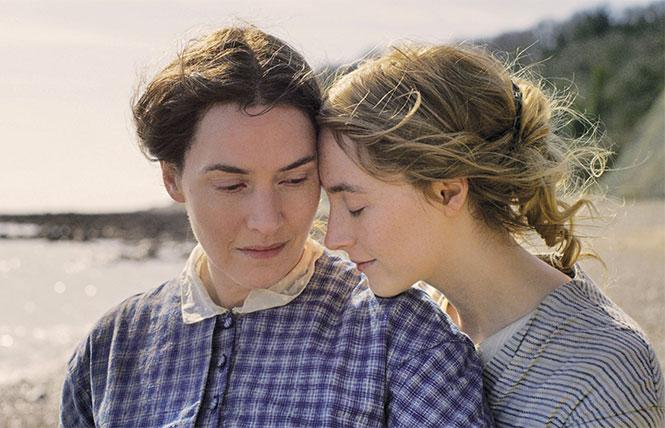 Following on that triumph, writer/director Francis Lee's sophomore effort, Ammonite, has arrived in local theaters and streaming sites after recently headlining the Mill Valley Film Festival. It wouldn't be a stretch to call the movie a lesbian sequel to GOC. Like most follow-ups it's not as great as the original, but definitely worth watching, primarily for the incandescent, almost inevitable Academy-Award-nominated performances, from its two superstar leads, Kate Winslet and Saoirse Ronan.

Like GOC, we return to a harsh wild punishing landscape, this time the rugged Southern English coastline near the village of Lyme Regis, the home of self-taught paleontologist Mary Anning (1799-1847), played by Winslet. Years earlier Anning discovered some famous marine fossils, but now survives searching for stones she polishes to sell to tourists in a curio shop run by her ailing mother Molly (the incredible Gemma Jones). Ammonites are the extinct spiral-shaped mollusk ancestors of octopuses and squid, providing the specimens collected by Anning.

Though fiercely denied by Anning's descendants, the film is loosely based on her alleged romantic tete a tete with Charlotte Murchison (Ronan). Murchison's husband, Roderick (James McArdle) is a wealthy geologist with the Royal Geographical Society, who has seen Anning's prized artifacts displayed at the British Museum (sold to cover her living expenses, though credit for her discoveries was often attributed to her jealous male peers). Tracking her down, Murchison wants to study her field methodology, paying her for the privilege. Charlotte, accompanying him, is suffering from melancholia after a miscarriage.

Deciding the sea air might be therapeutic, he hires Anning to watch her while he leaves to continue his scientific exploits in continental Europe. Anning cannot refuse the employment but resents Charlotte's interference in her work, though she'll later become a noted paleontologist in her own right after assisting Anning. The film depicts how they overcome their differences and begin a passionate relationship, despite the moral strictures of Victorian England.

Anning provides Winslet with her best role and superlative acting since her Oscar-winning performance in The Reader (2007). And make no mistake, Ammonite is Winslet's movie, proving how sometimes great artistry can elevate middling material.

As in GOC, the dialogue is sparse and with no narration, Winslet relies on virtuoso body language to convey her character's stern sense of control in a meticulously managed lonely daily routine. She shines in registering Anning's dour resignation at her unfair personal and professional predicaments, especially tending to her sick, disparaging mother.

As counterpoint, Ronan conveys Charlotte initially as pale and fragile in her depression plus starved of affection and attention from her dandy-like, self-absorbed husband. Slowly she becomes more confident and adamant, as her feelings for the emotionally withdrawn Anning grows. Her youthful spirited optimism is juxtaposed to Anning's grim, haggard ascetic disposition. 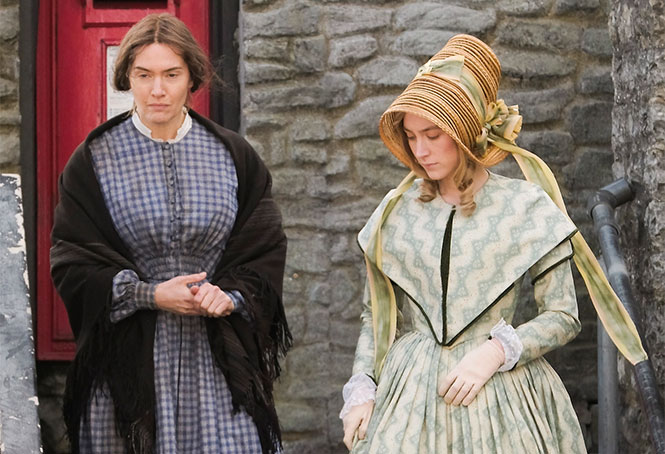 Tactile style
With the invaluable assistance of cinematographer Stephane Fontaine, Lee's sensorial almost tactile style possesses the viewer so thoroughly you shiver as the cold ocean waves crash onto the shore, feel the grittiness of the icy mud, hear the scratchy noise of sand being removed from beach rocks, almost cough up the dusty interior of Anning's grimy home, and wince at Anning's rough nicotine-stained fingers as she cuts up vegetables for dinner. Lee is a genius at conveying a sense of place, which becomes its own character, using it as an analogy for the protagonist's disposition.

Unfortunately, Ammonite follows on the heels of last year's French lesbian masterpiece, Portrait of a Lady on Fire, another 19th-century period drama set on a stark Brittany coastline, detailing an illicit affair between an angry, work-obsessed female painter and a Countess's daughter unhappily betrothed to a wealthy Milanese nobleman. Like Ammonite, it's also concerned with the erasure of women's intellectual achievements.

The superior Portrait was written and directed by lesbians and is able to show an emotional honesty in character motivation and plot, lacking in Ammonite. We never understand the pain underlying Anning or why she's so driven by her work. The film implies some past liaison with a rich older friend, poignantly etched by Fiona Shaw, but no actual details are forthcoming. We are given only vague hints and visual metaphors (too many) to account for narrative gaps, so there is an opaqueness and inscrutability haunting this sporadically sluggish film, that only roars to life during the combustible sex scenes.

Similar to GOC, Ammonite is all about the search for connection, by overcoming social, sexual, and generational boundaries. While Ammonite doesn't rise to fulfill all its ambitions and hindered by an ambiguous ending contrary to GOC's exhilarating fairy tale-like conclusion, viewers will find ample satisfaction, both in two breathtaking lead actors and in the film's postscript announcing 163 years after her death, Anning's scientific contributions were formally recognized by the Royal Society.

Over the moors: 'God's Own Country'