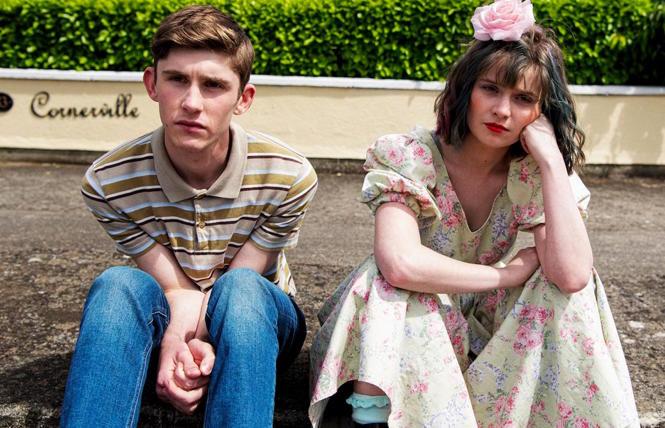 Gay filmmaker David Freyne (The Cured) gets personal with his Ireland-set queer rom-com Dating Amber (Samuel Goldwyn Films). A retro time capsule, Dating Amber is set in 1995, a couple of years after the decriminalization of "same-sex sexual activity" in that church-oriented country.

Unfortunately, in the town where Eddie (Fionn O'Shea) and Amber (Lola Petticrew) live, which is centered around a military base, being queer is still considered cause for ridicule and abuse. This is especially true at the Catholic school they attend, where lead bully Kev (Ian O'Reilly) is relentless.

Eddie's life is complicated by the fact that his father Ian (Barry Ward) is commandant on the base. As his (unathletic) eldest son, Eddie is expected to follow in his father's footsteps. Truth be told, he's not interested, but goes through the rigorous training nevertheless.

He also has a crush on his math teacher Mr. Sweeney (Peter Campion), something which Amber has observed. But Eddie is intent on maintaining a hetero façade, even though an attempt he makes with easy Tracey (Emma Willis) doesn't go well for him.

Amber, who regularly makes use of stones to get Eddie's attention, makes Eddie an irresistible offer. In order to distract their classmates, the two queer teens will become each other's beards.

This setup provides for unlimited comedy and O'Shea and Petticrew make for a natural comedy duo. Petticrew, in particular, is adept at delivering some of the sharper lines written by Freyne.

Skipping school one day, Amber and Eddie head to Dublin for what winds up being a life-changing experience involving a gay bar, a drag queen and young woman named Sarah (Lauryn Canny) who fancies Amber. A return trip to Dublin to attend a queer rave has consequences for Eddie and Amber when they get back home.

In spite of the unfortunate turn of events, there is something positive that comes of it. Amber comes out to Jill, who is surprisingly accepting. Eddie's mother Hannah (Sharon Horgan), meanwhile, has figured some things out about her son and is also unexpectedly favorable.

But there's more drama yet to come, especially after another male classmate (who is also at the rave) witnesses Eddie kissing a guy. This results in some bad behavior on Eddie's part and seriously threatens his relationship with Amber as well as his rep at school.

Seeing no way out of an increasingly awful situation, Eddie, who passed his military exam, prepares to leave for training camp. Without spoiling it, it's safe to say that there is a big, teary conclusion that does its part in restoring our faith in the power of love and friendship. Rating: B+