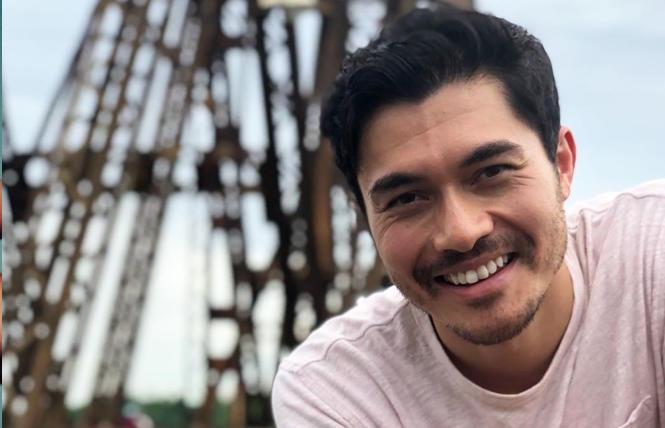 In a relatively short period of time, actor and straight ally Henry Golding's star has ascended, making him one of the most recognizable names and faces on film. Beginning with the double whammy of 2018's Crazy Rich Asians and A Simple Favor, and continuing with 2019's Last Christmas and The Gentlemen, Golding is a hot commodity.

In addition to these high-profile movies, Golding also ventured into the world of independent features with Monsoon (Strand Releasing), written and directed by gay filmmaker Hong Khaou (2014's Lilting). In Monsoon, Golding plays Kit, a gay man who left Vietnam for the UK with his parents when he was a young boy. He returns, 30 years, later to scatter their ashes. While there, he meets Lewis (Parker Sawyers, who played young Barack Obama in 2016's Southside With You), an American expat with whom he begins a relationship. Golding was kind enough to answer a few questions in advance of the November 2020 release of Monsoon.

Gregg Shapiro: What was appealing to you about the character of Kit in Hong Khaou's Monsoon that made you want to portray him?
Henry Golding: I think for me, it almost mirrors my personal journey in a sense. I grew up in an expat community in Malaysia until I was about eight. Then I moved from Malaysia to Surrey in the UK, just South of London. I grew up, pretty much, for the rest of primary school, secondary school, up until I was about 21 and made the decision on my own to move back to Malaysia in a search of trying to kind of get into broadcasting.

My experience of landing in Malaysia was just being kind of dumbfounded with how alien I felt. Thinking that because I'm half-Malaysian, I'm going to feel right at home, it's going to feel great. But it's often [laughs] a very sharp slap in the face of, "Yeah, you're definitely not used to this type of culture and culture shock. When I was reading (the screenplay for) Monsoon, it really resonated with me.

With Kit, it has much more of a personal trajectory, in a sense, that his parents never told him so much about Vietnamese. He has so many questions bubbling under him that needed answering that his parents, before they died, couldn't answer. So, he went with a mission of trying to figure out a little bit of his past. At the same time, he wasn't really expecting the experience that he got. 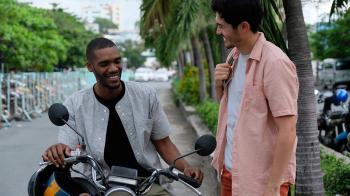 Had you seen any of Hong's previous films, such as Lilting, starring Ben Whishaw?
Yes, I did. I watched it pretty much immediately after I read Monsoon. I loved it! I think that was one of the things that drew me to working with Hong; his subtlety and beauty in being. That's what he wanted from Kit. These moments of self-reflection, these moments of inner turmoil and these questions just whirling around like a vortex in his head. There's this look on his face when he just kind of phases out. All this Vietnamese traffic! He'll be in the middle of the street somewhere, but he has just a moment to himself. He's had this sort of safety bunker within himself, growing up, and you see glimpses of that. To see him through the movie and his journey and have him come out of his shell; I think it's such a beautiful thing.

Like Lilting, Monsoon addresses loss, grief and family. For fans who know you well from comedies such as Crazy Rich Asians, Last Christmas and A Simple Favor, how do you hope they'll respond to you in such a serious role?
Hopefully they find that they enjoy it. I finished Crazy Rich Asians and I just got back from A Simple Favor, which we filmed in Canada, so I was in the middle of a point in my career where I had just gotten started. I had nothing that the world had seen. I think at that stage, I had always loved the idea of being involved with a much more personalized experience with filming a movie. That's what an independent (film) allows you.

So, the collaboration between myself, (co-producer) Tracy (O'Riordan) and Hong, it taught me so much. But yes, I think people are going to be surprised. Hopefully they see the range that I have as an actor. I've got Snake Eyes coming out next year. We have a little glimpse into this world before (I'm in) another studio film. I think I've had a taste of the nectar, to be honest with you. It was such a lovely experience to be so involved in a movie like that. It's difficult because you have people to answer to when there's a big budget and a lot of opinions to appease. But when you're making a movie for yourselves it's beautiful. 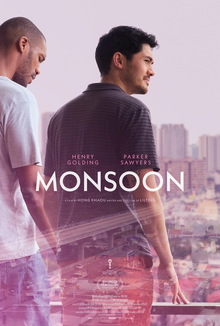 Monsoon doesn't shy away from the subject of Kit being a gay man, and includes intimate scenes with Kit and Lewis, as well a scene with a guy that Kit picks up while he's in Hanoi. Can you please say something about the challenges and rewards of playing a gay character?
For me, it was wonderful. Hong has a way of telling these stories. His sexuality wasn't the driving fact or driving attribute to Kit's personality or this story. It really centered around his personal struggle of identity. I think he's so secure in his sexuality, that it takes a backseat in a way.

Right; it's secondary.
Exactly! I've had a lot of messages from people who have watched the film, especially young, gay Asian men who have never seen that type of movie, where it's not even taken into account. It's so normalized, which it should be. It's so strange seeing what you perceive normality to be on the big screen, but be amazed by it. It just shows that there are communities out there that are starved of normality in representation. For me, I think approaching it respectfully, approaching with the collaborative spirit that I, Parker Sawyers and Hong had on the set; there was real love on that set. There was so much trust, so there was never a question of 'Should be doing this?' It just felt so natural, in a way.

It comes across that way. Kit returns to Vietnam after 30 years to scatter his parents' ashes, even though, as you mentioned, his parents left the country and never expressed any interest in ever returning. Do you think Kit was doing the right thing?
I think we rejigged the script a little bit to a point where he realizes this, and I think you see glimpses of this in the finished film. Kit had an understanding that he was bringing them home. But Vietnam was never their home for the past 35 years. Their home was where his family was. That was in the UK. We often do that as immigrants. Home is a distant memory. Home is really where the heart is. I think he comes to that realization; 'I never needed to bring them back, but I needed to come back.' 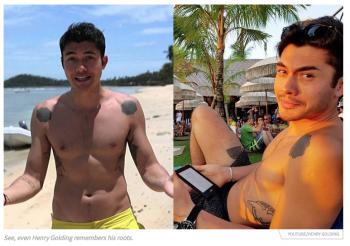 Henry Golding shows off his tattoos.

While in Saigon, Kit meets up with Lee (David Tran), an old childhood friend. Do you have a childhood friend that you haven't seen for many years with whom you hope to someday reunite?
Yes, from my time in Malaysia, when I was growing up with an expat kind of community. My dad worked on helicopters on the oil rigs and stuff like that. We had a very close community and all around the same sort of age. One of my best friends, his name was Mark. I think they were a South African family. I haven't seen him since we left when I was like eight, nine years. They moved to the UK, as well, I think. Often, we have these best friends that we grew up with as a kid and we lose contact. Sometimes it's how life is. It goes in chapters, doesn't it? It doesn't mean they're closed. It's not the end of the chapter; it's kind of open-ended.

Just another chapter. Your tattoos, including the one on your thigh, the one on your tricep and the ones on your shoulders, are visible in the movie. Do you have a favorite one of all of them?
I think the most personal for me are my shoulder tattoos. I'm from a tribe in Sarawak, Malaysian Borneo, called the Iban tribe. It is the strongest identifier for our tribe. It is given to a young man who's come of age after that they go out into the world. It's almost to help you travel through life with safety and to bring you home from these journeys. Iban men around the whole world, back in the day, if you came across people in the jungles and they had these identifying tattoos on them, it would be easily recognizable. Otherwise, there could be trouble.