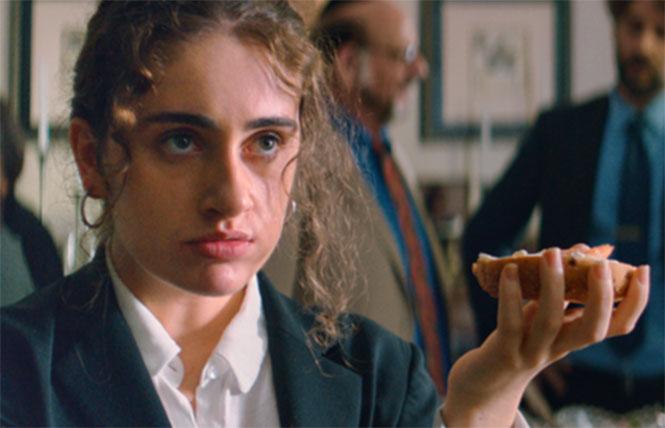 Frameline 44's tagline/theme is Engage. Act. Grow, with new Executive Director James Woolley noting, "The need to be inspired and to share one another's stories of LGBTQ+ lives around the globe, is even more palpable in these isolating times."

To its credit, Frameline in its special June Pride Showcase, did a superb job of adapting to our changed sheltered world of virtual streaming, where they reproduced the Castro Theater as closely as one could hope to experience, with the staff member introducing the film in the empty Theater itself, with a pipe organ excerpt, sponsors ad, and trailer.

Under demanding circumstances, Frameline has scheduled an exciting array of American and international films, (including a special spotlight on Taiwan) that will temporarily brighten your mood during these tense days and make queer cinema from Sept.17 through 27 essential home viewing. More than half the movies already premiered at LA's OutFest (August 20-30) so we can make several enthusiastic recommendations.

There may be a mini LGBTQ+ Jewish movie renaissance featuring two outstanding entries. Shiva Baby may be one of the best bisexual films ever made, in a category which previously has had few winners. Based on her 2018 short, writer-director Emma Seligman (Grand Jury prize at OutFest for Best Screenplay) creates a flawed but fascinatingly confused character in Danielle (Rachel Sennott in a star-making performance), attending a Jewish funeral of someone she doesn't even remember, to satisfy her parents (Polly Draper's mother is stupendous) who are hoping she might find a suitable husband.

She encounters her ex-girlfriend law student Maya and Max, the man with whom she is currently having sex for pay and now discovers is married with a new baby. Adrift as a post-grad in gender studies, she must fend off annoying questions from family and friends about her life's plans, maintain secrets, try to live up to unreasonable expectations, while figuring out who she is and what she wants.

Danielle is a mess professionally and personally, yet the hilarious Shiva Baby is heart-wrenchingly hopeful and insightful about the slippery transition to young adulthood today with just a hint of a finely-drawn faith component as a way of making sense out of the ensuing chaos. An absolute winner and unmissable at all costs. 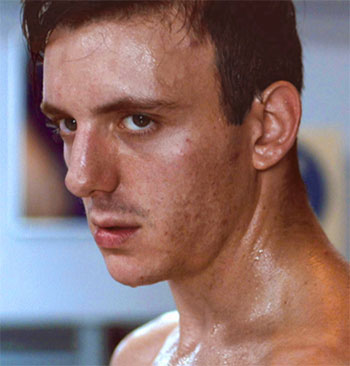 Spirituality is at the center of Eric Steele's Minyan (Grand Jury prize at OutFest for Best U.S. Narrative Feature), a period piece based on an award-winning short story by David Bezmozgis, that brilliantly recreates 1986/87 Brighton Beach Brooklyn revolving around 17-year-old David (a stunning Samuel H. Levine in a breakout role) son of Russian immigrant parents and a yeshiva student, as he sorts out his sexuality (with a gay bartender) and attachment to Judaism's culture and tradition.

Ron Rifkin radiates as his beloved elderly recently widowed grandfather, as they live together and befriend a closeted elderly holocaust surviving male couple in their building. Throw in AIDS, James Baldwin, Russian vodka, and a conservative synagogue with David attempting to comb through his competing identities and you have a potent evocative mix of a bygone era and the minefield that is intersectionality. Magnificent in every way. Skip it at your own peril. 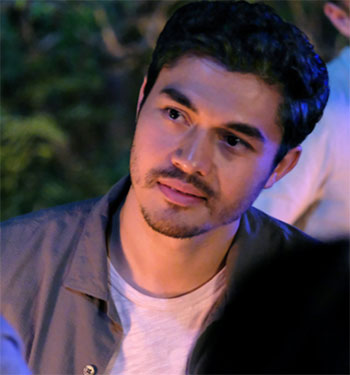 For those viewers who fell in love with 2014's Lilting about a gay man and mother-in-law mourning his dead lover, by the august Cambodian born, British film director/screenwriter Hong Khaou, will have reason to rejoice in his sophomore effort, Monsoon.

Kit (the straight Henry Golding from Crazy Rich Asians) is returning to his Saigon birthplace to scatter the ashes of his deceased parents in a nation where his connections are at best tenuous, as he interacts with distant family members, striving to figure out his relationship to his birth country.

Complicating matters is his Grindr hookup —perhaps evolving into something more— with ex-pat Lewis (Parker Sawyers) struggling with the Vietnam War past of his veteran father, highlighting how that catastrophe altered everyone's life in the film.

Monsoon is a subtle wink and nod commentary on the rootlessness of being an immigrant. Khaou is the master of melancholy and manages to convey so much emotion underneath the surface of his characters, with just enough dialogue to advance the plot and no more. A glorious standout with thrilling rewards for audiences. 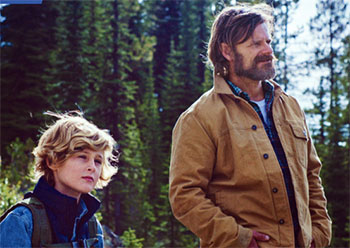 The Western is not dead and in a contemporary modern trans twist is given renewed life and significance in director/screenwriter Ann Kerrigan's suspenseful Cowboys, as troubled ex-con father Troy (a superlative Steve Zahn) and his trans son Joe (the remarkable Sasha Knight, who won the OutFest Grand Jury prize for Best Performance in a U.S. Narrative) head for Canada, as they try to escape from a trans resistant mother (Jillian Bell) and police detective (fabulous Ann Dowd, The Handmaid's Tale) chasing the fugitives while trying to piece together the family dynamics.

Gorgeous isolated Montana cinematography accents the challenges of being estranged 21st-century parents when all the rules have changed. Visceral entertainment that enables you to fall in love with all the characters even when they do stupid things. Monumentally good on a small-scale and riveting storytelling, Cowboys is an unexpected gem. 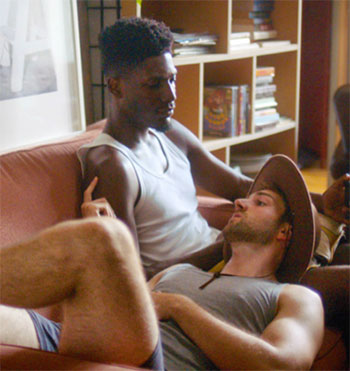 Writer/director Matthew Fifer transports us back to summer 2013 New York in Cicada, as bisexual millennial Ben (Fifer) begins an interracial male relationship with Sam (Sheldon D. Brown) while reports of the trial of pedophile Penn State football coach Jerry Sandusky filters through the narrative, triggering PTSD symptoms in Ben, who must confront his own history of being sexually abused.

Told with unvarnished honesty and compassion, Cicada doesn't sugarcoat the heavy emotional costs of surviving childhood trauma. By no means lighthearted, this introspective film still manages to be sexy and funny while remaining truthful about the challenges of interconnecting with others while carrying hefty oppressive personal baggage. Cicada hits you in the gut, but you won't mind the punch.

An unraveling male mid-life crisis about an Irish dockworker stumbling after his father's death and the possibility of losing his job, is beautifully rendered in Peter Mackie Burns' Rialto, based on the 2011 play Trade by Mark O'Halloran, who is also the screenwriter.

The married-with-kids 46-year-old Colm (Tom Vaughan-Lawlor) stumbles onto 19-year-old Jay (Tom Glynn-Carney, Dunkirk) in a shopping mall bathroom with Jay offering him sex for money. This arrangement unleashes repressed desires in Colm and he doesn't know how to deal with them appropriately, resorting to drinking binges and fights with his family.

Colm and Jay, feeling the pressure of fathering a newborn with his 19-year-old girlfriend, begin to open up to each other, with no labels applied to either man's sexuality. Viewers will cringe at the first person Colm reveals his secrets. Vaughan-Lawlor gives a truly great performance alternating between being overwhelmed and exhausted by his burdens (note the authentic body language) and groping to find some release from his trapped existence.

You will need subtitles, as there is a great deal of Irish slang foreign to Americans, but there are rewards aplenty for your patience, in this adroit cathartic dissection of toxic masculinity. 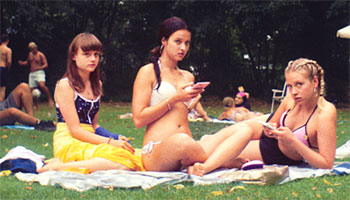 Coming out/coming of age becomes the raison d'etre for sheltered shy 14-year-old Nora (Lena Urzendowsky) during a sweltering Berlin summer in the German film Cocoon. Hanging out with her sister and her friends because her mother is preoccupied with work and her social life, lonely Nora finds solace in her caterpillar collection.

But temperatures get even hotter when butch free spirit classmate Romy (Jella Haase) enlivens Nora's boredom as well as the picture's languid pace. Nora experiences her first period in perhaps cinema's most horrifying scene of that female rite of passage.

The cocoon metaphor is a bit heavy-handed, but both Nora and Romy are vibrant well-etched characters and you care about their potential union. Honestly this worn out genre has been done better and more innovatively elsewhere (such as Temblores (Tremors) and To the Stars from last year's Frameline), but Cocoon has its occasional charms and will appeal to questioning teenagers.

There is an ongoing French explosion of sublime lesbian films with Two of Us, the latest exemplar, reminding viewers about the devestations and unintended consequences of being closeted. From the world's and their families' perspective, Mado (Martine Chevallier) and Nina (Barbara Sukowa) are friendly neighbors, but in truth they have been clandestine passionate lovers for years.

They are considering moving to Italy when a crisis with Mado separates them, forcing the independent yet desperate Nina to reunite with Mado despite the opposition of her family, becoming a test of their love.

Sukowa is marvelous, alternating between guilt and anger over being forced to lie about her relationship and employ sneaky tactics to spend time with Mado. An engrossing, almost seductive story that has you rooting for the increasingly disintegrating Nina. A triumph and a thoroughbred champion in the sparse sweepstakes of movies about elderly LGBTQ people.

Look for Part II of Brian's feature coverage next week.