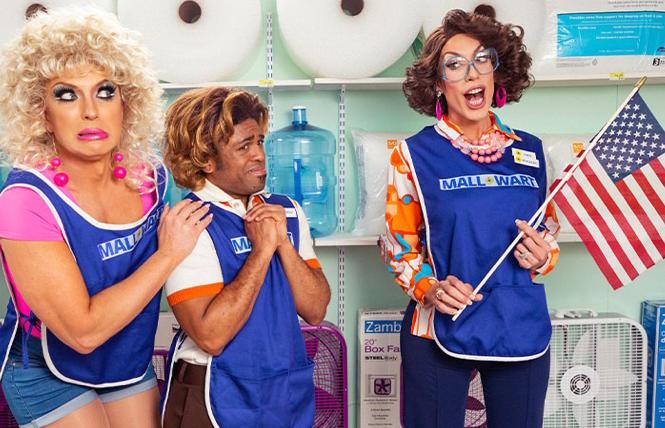 If this is one of the benefits of socially-distant event-themed arts experience, huzzah. Now to convince our friends with comfy cars to join in.

Running six days a week September 17 through October 18, Fort Mason Flix will feature an oversized 40' x 20' high definition LED screen. The powerhouse screen is up to 90 times brighter than a standard movie theater projector. The unique theater-going experience, allows visitors to enjoy their favorite movie in day light as well as after sunset.

"Where better to host a drive-in than on the San Francisco Bay?" says Nick Kinsey, director, external affairs of Fort Mason, adding that the Flix events are "a chance for us to once again transport and inspire people through art."

Fort Mason Flix will offer online ticket sales, contact-less check-in and concessions, a limited capacity, safe physical distance between vehicles, regular cleaning of restrooms and PPE for all staff. Visitors will be required to wear masks at concessions, when using the restrooms and during any time they are not in their vehicle. 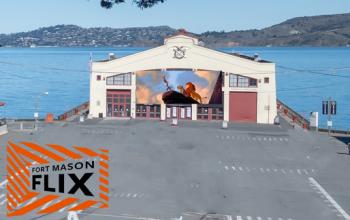 For Frameline, Sh*t and Champagne, the film adaptation of the hit comedy show at Oasis, will please car-comfy fans. The drag parody premieres at the Concord Solamno Drive-In.

Drollinger stars as the titular Champagne Horowitz Jones Dickerson White, a charismatic stripper who finds herself in danger after her fiancé and half-sister are both murdered. When the cops refuse to investigate, Champagne takes matters into her own perfectly manicured hands to find answers.

Prepare for laughs galore in this action-packed parody. Sounds fun! The live show sure was.

I have to admit a nostalgic longing for drive-in theaters. As kids, my brother and sister and I played on a swing set under a big outdoor screen, The MidWay, in our semi-rural Ohio, while our parents actually watched the movies. More often, we slept in pajamas in the back of our station wagon.

By high school, gulping 'beverages' and smoking, uh, 'substances' in the back of a pick-up truck with pals through a five-film Planet of the Apes marathon added to the adventure of drive-in cinemas.

Make your own fun, rent a car if you don't have one, then "go on out to the lobby, to get yourself a treat."

UPDATE Sept. 9: Within 72 hours of learning about the new pop-up drive-in theater coming Fort Mason Center for Arts & Culture (FMCAC), Bay residents scooped up every ticket, selling out all available showings through the end of September, FMCAC announced today.

"While we thought we might have a hit with Fort Mason Flix, we didn't imagine it would be an instant blockbuster," says Nick Kinsey, director, external affairs, FMCAC. "We are honored to invite San Franciscans to take a break from 2020 and responsibly enjoy their favorite classic films at Fort Mason Center for Arts & Culture. Stay tuned as we roll out more titles and dates."