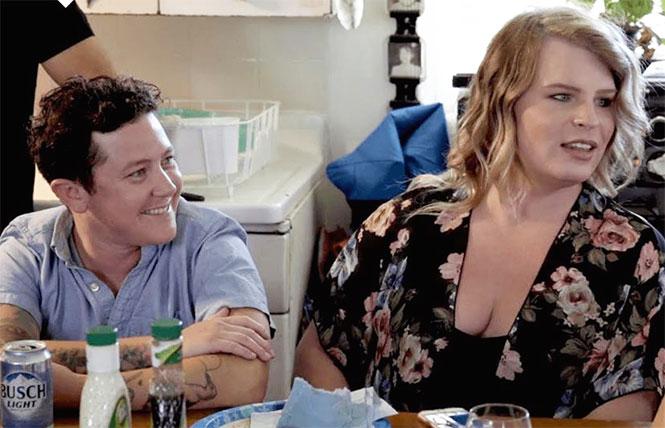 Seeing as how Jack & Yaya is first-time co-directors Jen Bagley and Mary Hewey's full-length documentary debut, some things can be forgiven (i.e. the endless Superbowl scene). Nevertheless, Bagley and Hewey get more right than wrong in their rendering of this touching true story.

Neighbors and inseparable friends since childhood, Boston-based schoolteacher and visual artist Jack and waitress and performer Yaya first met when they were three and two, respectively. Back when they still went by their dead names, Jacqueline and Christopher. Back when they were just beginning to realize who they were before they even knew how to become those people.

Yaya (aka Christina) still lives in South Jersey, in the house she moved into with her family, when she was young. It's the house next door to where Jack's father Tony (and his girlfriend) live; the house in which Jack grew up.

When we first meet Jack, who lives with his dog Plinko, he is still in the process of transitioning. He has had top surgery and is taking testosterone. Jack and Plinko drive from Boston to Jersey for the July Fourth holiday in his beat-up Honda Civic. It's a significant journey because not only will Jack be reunited with Yaya (who relies on him), but he will also be able to spend time with his loving and supportive father.

Leading up to this point, we've mostly heard from Jack and Yaya. They tell meaningful and emotional stories about their relatives. They speak openly about their individual difficulties. The more eloquent Jacks is better at conveying the traumas and triumphs of his transition.

Jack and Yaya's coming out experiences, to each other and then to their families, contain the kind of powerful and valuable information so necessary now, especially as the trans community becomes increasingly visible, and also at risk. Being that they are millennials, they also had the advantage of coming out in a more enlightened time (Jack's story about his grandmother's response to Rosie O'Donnell coming out is one example).

Yaya's own coming out may or may not have been complicated by her having a gay older brother, John. John admits to having a hard time when Yaya made the decision to transition. This is particularly fascinating because John and Yaya both performed in drag (known as Such Dalight and Yaya Dalight, respectively). Additionally, Yaya had to deal with her mother's terminal cancer diagnosis along with her mother's request that she hold off on transitioning until after she was dead.

Still, the struggles we see firsthand are not diminished by public awareness. The issues that Yaya has in New Jersey with legally changing her name to Christina as compared to the ease with which Jack was able to change his shines a spotlight on how far we still have to go as a society.

In the final analysis, Jack & Yaya is a celebration of a lifelong friendship, about which Jack and Yaya put it best. Jack says they were good friends when they were younger because of who they actually are, while Yaya describes them as "old souls who knew each and had met again." Rating: B