If you saw Gillian Robespierre's fantastic 2014 feature film Obvious Child, you know what Karen Maine is capable of as a screenwriter. The movie tackled a difficult subject (unplanned pregnancy) with humor and grace, no doubt leading to many heated and heartfelt conversations. 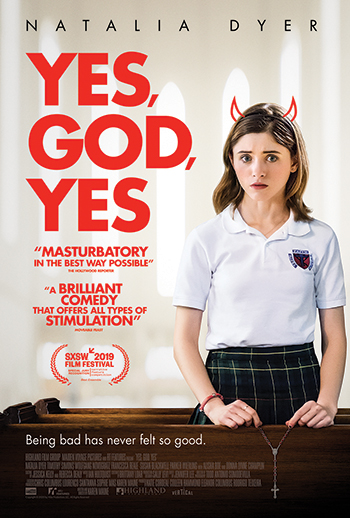 Nevertheless, Alice has found ways to pleasure herself at home, even with audience member God watching. While rewinding to the sex scene between Jack and Rose in Titanic, for example. Or the AOL word game chat room that leads to a series of sexually graphic IMs from a fellow player.

Back at school, Alice is the subject of rumor about a particular sex act (which never occurred) at a weekend party. Eager to clear her name, Alice attends a four-day school sponsored religious retreat led by Fr. Murphy. Nina (Alisha Boe from 13 Reasons Why), assigned to be her group leader confiscates her watch, but Alice manages to keep her cellphone. Fortunately for her, the phone's vibrate function will come in handy later. 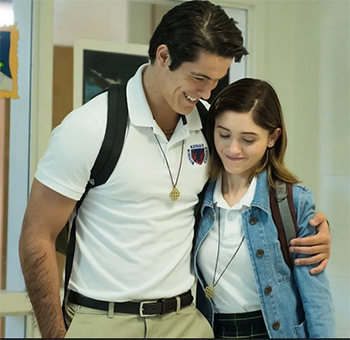 Even at the retreat, Alice is still plagued by gossip and innuendo. Thankfully, Alice's dreamy group activity leader, football team star Chris (gorgeous Wolfgang Novogratz from The Half of It), is unaware. When Nina busts Alice for having a cellphone, Fr. Murphy punishes her by giving her dining hall clean-up duty. But it's not all bad, because the penance also gives Alice access to the priest's office and computer where she once again logs into a chat room, setting off a series of events with serious consequences.

Fed up with the situation at the retreat, Alice sneaks away. Walking along a highway, she comes across a roadside lesbian bar where she meets OWL (Older, Wiser Lesbian) Gina (Susan Blackwell), who is not only the proprietor, but also an ex-Catholic who imparts her wisdom to Alice. Gina safely returns the teen to the retreat site, and as her final act of kindness, suggests that Alice look into schools on the East and West coasts, where she might find other like-minded people. 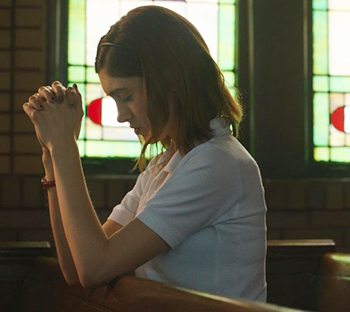 Alice survives her last day at the retreat, while others get their comeuppance. She even gets an apology from BFF Laura (Francesca Reale) for the way she mistreated Alice.

Yes, God, Yes is one of the funniest and smartest comedies of 2020. It goes a long way in establishing Dyer as a talented young actress and Maine as a writer/director worth following. For the record, you'll never watch Titanic in the same way again. Rating: A-