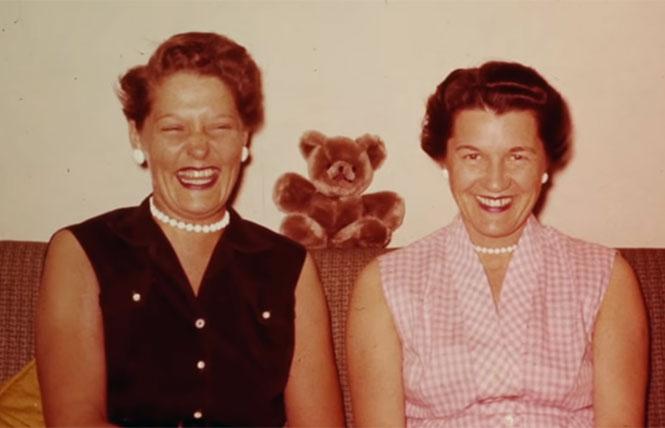 Terry Donahue and Pat Henschel in 'A Secret Love'

It is a jarring disquieting scene. A love poem has been recited and then we hear that the names of the author and the recipient have been torn from the bottom of the pages containing them. This precaution occurred because it involved two women in the 1940s and had authorities discovered the clandestine letters, they could have been used as evidence to arrest them, as homosexuality was illegal.

This unsettling revelation is one of the reasons why the documentary A Secret Love, about a 72-year love affair between Terry Donahue and Pat Henschel, is so gripping and heartfelt. Produced by Ryan Murphy, its SXSW Festival launch canceled due to the pandemic, it has just premiered on Netflix.

Directed by Terry's grand-nephew Chris Bolan in his debut, while seemingly a family affair, A Secret Love doesn't shy from tense squabbles and disturbing history, showcasing the steadfast devotion and fidelity of these two women's relationship, paralleling the entire arc of LGBTQ history from outcasts, criminals and sinners to marriage equality. 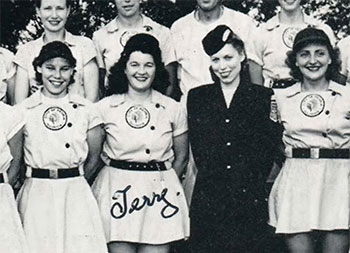 The story begins in 1947 when the two women met at a hockey rink in Moose Jaw, Saskatchewan and sensed an immediate attraction. They both grew up in farms in northwestern Canada and Pat experienced a turbulent family life, realizing early on her parents would never accept her sexuality. Terry, a softball celebrity, had been recruited at age 19 by the All-American Girls Professional Baseball League in the U.S. during World War II, eventually playing four seasons as catcher for the Peoria Redwings.

This saga was the inspiration for the 1992 Penny Marshall hit film, A League of Their Own. Terry suggests there were quite a few lesbians who played on teams, a fact not mentioned in the movie, but will figure more prominently in the upcoming Amazon Prime comedy series remake.

Both women intuited they would have more freedom if they relocated to the U.S., so they moved to Chicago, living together as partners, but keeping their relationship a secret. The title of the film derives from a 1950s Doris Day Academy Award-winning song, with the refrain, "At last my heart's an open door. And my secret love is no secret anymore."

Although bars were a common meeting place for lesbians at that time, the couple stayed away from them, as police raids were frequent. Being apprehended meant their names would be listed in newspapers, ending their careers and being deported back to Canada. They worked for the same interior design company, eventually buying a home together.

They socialized with other gay and lesbian couples, having their own home parties — still friendly with charming elderly male partners, Jack Xagas and John Byrd, all these years later. They informed straight acquaintances they were cousins, a legacy of shame that lingered for decades. 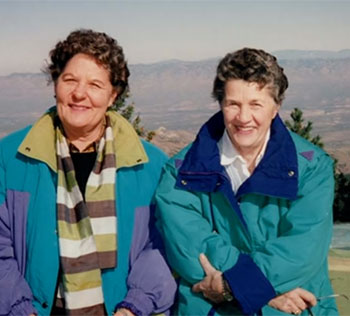 Terry Donahue and Pat Henschel in 'A Secret Love'

Terry's family, with whom they remained close, were told they were roommates, a necessity due to Chicago's high cost of living. Terry's niece, Diana adored her and Pat became 'Aunt Pat.'

Despite possible benefits for them, Terry resists the idea of marriage even though it became legal in Illinois in 2013.

Secret Love is most adept at showing how even when you have an understanding biological family, there can still be conflicts. As the documentary opens, Terry and Pat, now in their 80s, are deciding whether to sell their home and enter an assisted living facility.

Terry is afflicted with worsening Parkinson's Disease, limiting her mobility. She's also alarmingly and rapidly lost a great deal of weight. The quasi-curmudgeonly protective Pat isn't keen with sharing the genial Terry (whom she daily requests a morning kiss) with anyone, doesn't want to move, and has no desire to return to Terry's family in Edmonton.

She fears surrendering her independence and being the only same-sex couple in a care institution. Diana challenges Pat's lie that they cannot afford to move, insisting action is necessary. How these issues of relocating and marriage are resolved becomes the remaining focus of the film.

To his credit, Bolan is unafraid to show the unpleasant sides of all the participants. Despite their being family he remains truthful about their disagreements. Through its use of archival footage, home movies, nostalgic photos, newspaper clippings, and letters, the film gives an intimate, poignant account of the aging process and the bittersweet prospect of losing one's cherished partner.

Triumphantly, the movie documents that love conquers all, even if it takes 70 years to materialize. To those who believe same-sex relationships are inferior or dissimilar to straight ones, they need only watch Secret Love to be otherwise convinced.