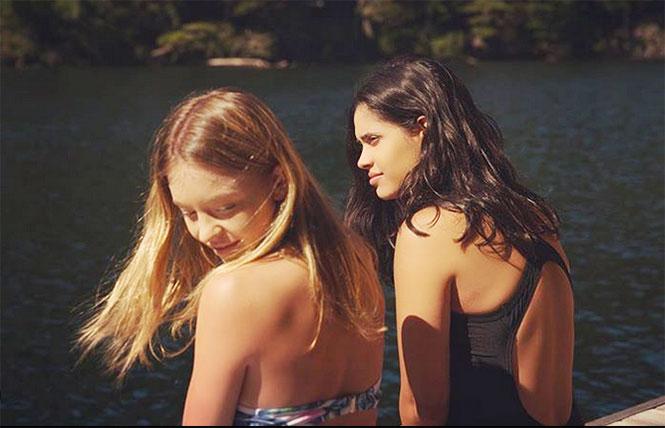 As writer-director Lara Jean Gallagher's Clementine (Oscilloscope) opens, Karen (Otmara Marrero) is reeling from her recent bad break-up with renowned visual artist D. (Sonya Walger). She re-watches a video on her phone of D. watching her sleep. She stalks D. Parking in front of D.'s house, Karen waits for her to leaves and then tries unlocking the front door with her key. But the locks have been changed.

Undeterred, Karen drives to D.'s lake house. She breaks a window to get inside only to later discover the hidden key in the fake rock on the deck. After bandaging the hand she cut on the broken window glass, Karen settles in for a few days. She rifles through drawers discovering a bag of weed and a gun (yes, the gun will reappear in the second act!).

The next day Karen encounters Lana (Sydney Sweeney). First, she sees Lana sunning on the dock, then again later when she is looking for her lost dog.

Over the course of the next few days, they become better acquainted. Karen helps her find her dog. Lana leaves a Thank You note with her phone number. 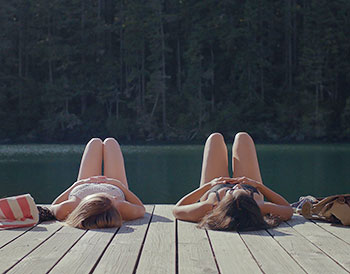 Lana, who says she's 19, comes over and they continue to get to know each other better. They talk about art, get high, listen to records. They get silly and play games. Lana keeps the roach as a "souvenir." The next morning, Karen wakes up to find Lana making breakfast in the kitchen. Apparently, she stayed the night, but nothing happened between them.

Neither of the women are where they're supposed to be. Lana is keeping her distance from Tommy who promised to take her to L.A. because she wants to be an actress. Karen is startled by a knock at the door. She meets Beau (hot Will Brittain from Blow the Man Down), the young caretaker there to do repairs and check on the house. Beau's presence puts a strain on Karen and Lana's budding relationship. When he has a moment alone with Lana, he tells her that Karen is "a dyke."

Meanwhile, D. is aware that Karen is at the lake house. She calls the landline, she texts Karen's phone. She tells her not to do anything stupid. As you may have figured out, Beau is there to keep an eye on Karen for D.

After Karen rescues Lana from a bad situation at Tommy's, Karen invites her to stay over. They share small intimacies; Lana braids Karen's hair, Karen applies eyeliner to Lana's lids. At one point, Lana puts on Karen's bathing suit and blouse, paints her toenails the same color as Karen's. When Beau tries flirting with her, Lana stops him in his tracks.

Just as we think the seduction we are watching unfold is about to take place, Lana backs off from Karen. As if to explain, Lana tells the story of what happened at Tommy's when she called Karen to pick her up. Lana said she wants to be an actress and soon we are left wondering whether she's acting for Karen or if she's genuine. The story Lana tells leads Karen to take the gun (see?) to Tommy's and retrieve a video camera with damning footage.

When D. returns, Karen's world crumbles at a faster pace. She learns Lana's real name (Julie) and her real age (16). Adding insult to injury, D. has Beau change the locks on the lake house. In a final phone conversation we discover just how good Karen and Julie can be when it comes to acting.

Fans of slow-paced tension will probably find something to like about Clementine. But for those who want just a little more action, this is not the movie for you. If you're wondering where the title comes from, Clementine refers to the fruit Lana peels during one of the first days she spends with Karen.