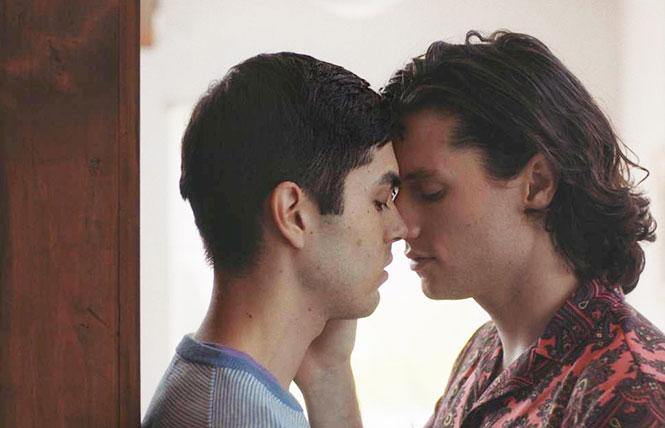 The new relationship comedy "Straight Up" pokes fun at an old situation: an effeminate gay man attempts to date women, with results both poignant and deliciously absurd. A hit at the 2019 Frameline film festival, "Straight Up" introduces us to Todd, a 20something man who dislikes bodily fluids and is currently experiencing a sexual identity crisis.

With this fresh hook, Asian-American writer-director James Sweeney's feature-film debut has reinvented a tired old subgenre of homo films that celebrate gay men retreating back into the closet via cover marriages to straight-identified women.

Sweeney, previously known to Frameline audiences for the short film "Before Midnight Cowboy," introduces us to the visibly nervous Todd (Sweeney) during a session with his shrink (the talking cure paid for by Todd's parents) as the boyish man attempts to explain his desire to jump into the boy-meets-girl dating pool.

One of Todd's male friends opines, "Todd, you can't describe yourself as straight just because you don't like the people you've been dating."

The plot thickens when Todd, quite accidentally, meets Rory (auburn-haired, Canadian-born Katie Findlay), a witty young woman who quickly initiates an intimate friendship with Todd, who sees her as his last chance to avoid turning into a bitter old bachelor.

Combining hilarious one-liners with frisky party games like Truth or Dare, "Straight Up" takes us on a wild ride with a younger generation who continually challenge each other to explore both ends of the Kinsey Scale.

My favorite scene has Todd and Rory facing off in the stacks of a college library.

"You're restocking the shelves."

"Some of the books are out of order."

"That's not your job. You know what your problem is? You have a super-friendly demeanor, like you look super-helpful."

"Sure. Don't make eye contact, don't smile. The more you can project an air of antipathy, the less you'll be approached."

Todd turns his back to her. "I'm ignoring you."

Sweeney's coup is a third act that leaves us up in the air about whether Todd and Rory have a future together, as professional housesitters or in separate states of desire.

"Straight Up" manages both to recall the late-1950s comedy chemistry and innovations of stand-up comics and successful filmmakers Mike Nichols and Elaine May, and follow in the more recent comic footprints of Asian American actor-writer Justin Long.