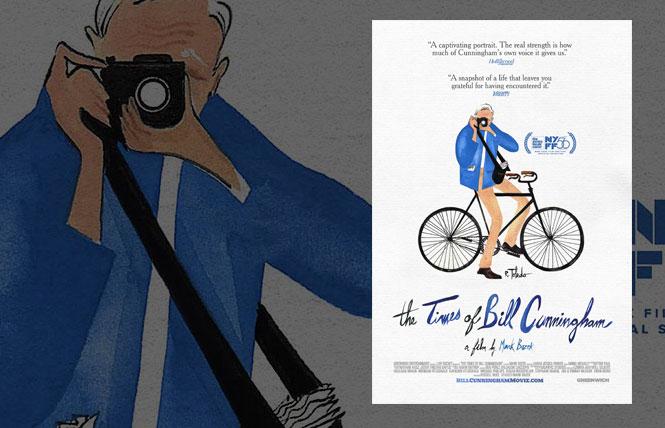 Last week Out There went to see filmmaker Mark Bosek's new documentary "The Times of Bill Cunningham," about the late New York Times street photographer of the same name. The film showcases some of the best of Cunningham's photos from his iconic "On the Street" column, and is narrated unobtrusively by the actress Sarah Jessica Parker. It was a selection of the 2018 New York Film Festival, and was an Audience Award winner at the 2019 Aspen Filmfest. Still, after viewing it, we had serious questions about why it was ever made.

The impetus appears to be the rediscovery of a 1994 videotaped interview with the fashion historian and press photographer, done in conjunction with some honor he was being given at the time. So we get to revisit Cunningham's career trajectory in his own words, from moonlighting milliner to fashion house stalwart. We revisit his monklike abode in the old Carnegie Hall Studios, where he slept on a mattress among file cabinets and storage boxes full of prints. We see him zoom around NYC on his bicycle in his trademark blue jumpsuit. But here's the puzzlement: We've seen this all before.

In fact, the same photographer's life was the subject of director Richard Press' 2011 documentary "Bill Cunningham New York." Bozek mentions in his film that Cunningham never saw the earlier film about him, but instead spent the night of its opening outside on the street, photographing its audience come and go. That's some meta-coverage right there.

Without any evidence to support its claim, the new film asserts, "While the attention that was brought to him via a growing number of accolades and a popular documentary in 2011 may have brought [Cunningham] some degree of lifetime achievement, it is more likely he regretted it." But why? In the new film, he mentions his sadness that so many dear friends and great talents had died of AIDS. But little else in his personal life, not to mention love life, crops up in either exploration. The photojournalist remains something of a cipher: the eye watching, never the brain revealing.

Reader, we enjoyed screening this film, but we felt somehow complicit in its elbowing the earlier documentary aside, without really getting the reason why. Still, if someone wants to make another film about the same personality, we will go to see it — provided it has something new to say.

Meanwhile we have to admit, we go to a lot of documentaries, and the in-depth exploration of personality is probably our favorite genre among them. Over the years, we've enjoyed documentaries about Diana Vreeland, Imelda Marcos, Whitney Houston, Amy Winehouse, Fran Lebowitz, Judy Garland and countless homosexuals. We would see another film about any of them, if it gave us a new perspective or unexpected insight into their lives. A good illustration of this is a paired couple of films by the documentarian Joshua Oppenheimer. "The Art of Killing" from 2012, and "The Look of Silence" from 2015 are both in-depth character studies of people, still alive, who participated in the Indonesian mass killings of 1965-66 perpetuated in the name of anti-Communism. They are really two chapters from the same project. But they each feel like their own film, and seeing either one can be revelatory without seeing the other. Kudos to a filmmaker who can make that happen.