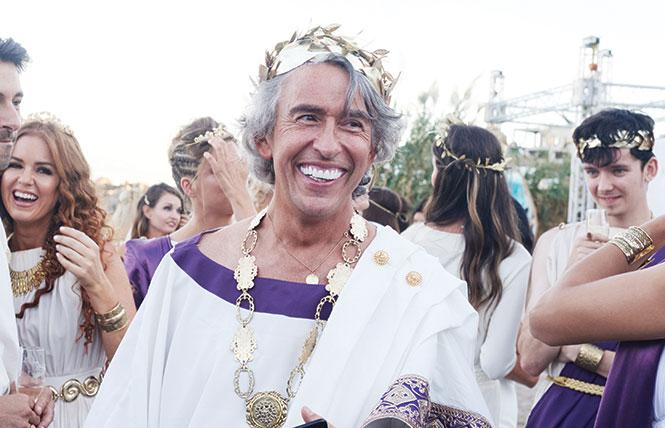 How do you pull off a satire of the super-rich at a time when the real-life critters are tossing more bucks around in a race for the White House than can be spent on a naughty little British comedy? "Greed" (opening Friday), from British director Michael Winterbottom and comic actor Steve Coogan, has Coogan playing an arrogant, knighted textile importer who has spent most of his career extorting criminally low-bid contracts from the owners of Third World garment factories in order to sell fancy duds for pennies on the pound, while factory workers receive starvation wages.

A comic set-piece has Coogan's sweat-shop operator taking an aggressive stand against a UK government committee trying to probe his Dickensian-style clothing empire: "Is this an investigation into my tax affairs? I pay what I have to and no more, because I'm not stupid. If you're going to chase people avoiding tax, why not go after the big boys? Look at Apple, look at Amazon, Starbucks, why are you chasing me?"

"I suggest you Google it, Mr. Chairman. How much tax do you think Google paid? Not very much! If you don't believe me, talk to Bono, he's avoided hundreds of millions of pounds in taxes while claiming that U2 are based in Holland! It doesn't stop him going about the world in expensive sunglasses claiming to end poverty or whatever."

Coogan, you may recall, was both funny and poignantly sad in "Stan and Ollie," the nuanced bio-pic about the careers and off-screen relationship of the early-20th-century Silver Screen comedy duo Laurel and Hardy. Coogan played the brains of the outfit, British-born Stan Laurel. In "Greed," the actor has bitten off a bit more than can be easily digested by audiences, who are paying more than the minimum wage to be amused for a couple of hours.

British artists such as Alec Guinness, Peter Sellers and John Cleese could skewer targets ranging from the British War Office and the monarchy to organized religion while leaving audiences on both sides of the Atlantic wanting more. But "Greed" suffers from a lack of dramatic focus, opting for scattershot, heavy-handed scenes against easy targets. I saw the film as the closing-night offering of the fab Mostly British Film Festival at the Vogue. That crowd appeared to be mildly engaged.

"Greed" was written by director Winterbottom, with additional material by Sean Gray. The supporting cast includes Isla Fisher, Shirley Henderson and young Asa Butterfield as a prankish teen whose practical joke involves Coogan's billionaire plus a dangerous old lion. Spoiler alert: the third act is a killer in more ways than one.